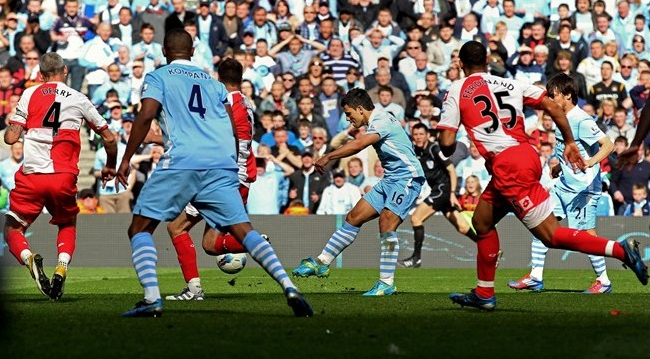 When Jamie Mackie headed Queens Park Rangers into a 2-1 lead at the Etihad Stadium yesterday I’ll admit to giving up hope of Manchester City winning the league.

We’ve seen City make a balls of things on the final day before – Robbie Fowler’s missed penalty against Middlesbrough which cost the club a place in Europe, the 8-1 defeat to the same opposition just four years ago, and of course the 1996 debacle when players held the ball in the corner against Liverpool thinking a 2-2 draw was enough to avoid relegation. It wasn’t.

The ‘Typical City’ mentality is a tough one to shake, and a rollercoaster season like the one we have just experienced makes it very difficult to think any different.

However, when it mattered most, this new look Manchester City adopted the never say die attitude we have become accustomed to seeing from the red half of the city and won with goals in the 92nd and 94th minutes to end a 44 year wait for English football’s top prize.

Sergio Aguero’s composure to fire home the winner was exemplary. He could have gone down under a challenge, he could have pulled the trigger first time and had his shot blocked, and he could, like Tevez and Nasri amongst others before him, blazed high and wide with the goal at his mercy.

Instead the Argentine was at his clinical best to beat Paddy Kenny, who for so long had been playing the Ludek Miklosko role with some superb saves after his first half howler for Pablo Zabaleta’s opener.

Joleon Lescott’s error for Djibril Cisse’s equaliser invoked that “Oh here we go” feeling that comes when you’ve experienced so many disappointments in the past. Lescott has had a great season but it would have been in keeping with the ‘Typical City’ idea for his one crucial error to cost them the title.

Mackie’s goal had QPR on the verge of a sensational shock, before Joey Barton did what Joey Barton does best by making himself the centre of attention unnecessarily. I liked Barton when he was at City, he’s a very good player, but his talent is completely overshadowed by what is simply an unstable mentality.

As Rangers defending doggedly a man short with City peppering their goal, all looked lost as the clock ticked into injury time. With City’s 43rd effort at goal, Edin Dzeko, who has struggled for goals in 2012, rose superbly to nod in David Silva’s corner, before Aguero had his magic moment.

There have of course been sour moments this season. The Tevez affair will no doubt be revived in the summer, while Mario Balotelli’s indiscretions are well documented. Both played their role in a whirlwind few weeks though, Tevez with his goals and Balotelli with his vital touch to Aguero for the winner yesterday. Both characters are questionable more often than not but for now they are part of a Premier League winning squad.

The spine of the team has remained consistent with Joe Hart, Vincent Kompany, David Silva, Yaya Toure and Aguero enjoying career best seasons. Skipper Kompany is an extremely likeable character, and has grown into arguably the best leader in the league.

The sight of Yaya Toure hobbling around in the first half was devastating given the impact he had against Manchester United and Newcastle recently. Even on one leg he was still able to set up Zabaleta for his goal. The Ivorian is a machine and when he is on song there’s no one better in the league. Claiming the title was the perfect present on his 29th birthday.

The often unsung heroes deserve a mention; the likes of Gareth Barry and Pablo Zabaleta have been crucial to the makeup of the squad and proved their work with consistent performances recently.

Samir Nasri left Arsenal with few well wishes but his reasons for doing so are now justified with a Premier League winners’ medal around his neck. Gael Clichy is no doubt equally happy with his decision. Admittedly Nasri was hit and miss for much of the season but the Frenchman had his moments, most notably his winning goal against Chelsea.

The easy cheap shots about City buying the title are there, but really they hold little weight when every top flight championship these days is won with players who cost and earn millions.

Roberto Mancini deserves credit for year on year progress in the league since taking over at the club and, even with the backing of the world’s richest owners; it isn’t a foregone conclusion to get a group of players with egos to perform well together.

Of course there are still challenges ahead, and the Champions League will be top of the agenda for next season, but for now City fans can enjoy being top dog for a change.

It feels fantastic, and hopefully it’s just the beginning.