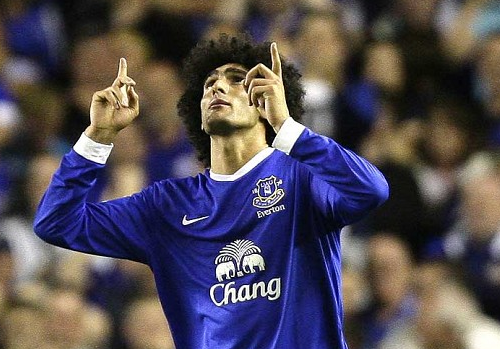 With just 33 games left for each Premier League team this season, now seems like the perfect time to bemoan the past and predict the future.

Two 0-0 draws in their opening two games saw Arsenal fans bemoaning the loss of RVP.  But three games later and all is well with the Wenger boys.  It turns out Cazorla was a steal, and Podolski is a player even when there isn’t a major international tournament.  Plus, whisper it just in case he gets injured in all the excitement…Wilshere’s back!

And then there’s Steve Bould, whose appointment as assistant manager was a masterstroke.  Pat Rice pointed a good finger, but Bould doesn’t just sit on the bench like a grumpy uncle.  It’s no coincidence that with the arrival of a member of Arsenal’s almost-impenetrable defence of the 90s, Vermaelen and company are finally looking like a unit.

So it’s a shame that come March they’ll be out of every cup competition, and Walcott will keep talking about signing a new contract but suspiciously avoid all forms of writing equipment, while Wenger will have a hissy fit when it gets too much and we’ll all have a good giggle (because he’s funny when he’s angry), and in a year or so, Vermaelen and the Ox will be allowed to stroll into the last year of their contracts and then be sold to Barcelona and Manchester United respectively.

Consecutive promotions and a twelfth-place finish last season meant Paul Lambert’s Norwich were heading in one direction only.  So when Villa appointed Lambert in the summer, hopes must have been high that the struggles under the unwanted Alex McLeish were a thing of the past.

But the team is largely the same, too many kids, a once-prolific striker who’s lost his fitness and his mojo, and Gabriel Agbonlahor, who is either a winger or a striker but doesn’t seem particularly good in either position.

From the start of McLeish’s reign, the fans made clear their disapproval.  But with a tiny squad of kids, defenders and Shay Given, they stayed up.  There is only so much a manager can do when the owner won’t spend.  With Lambert struggling just as McLeish did, maybe it’s not the manager that’s the problem.

A poor start to the season suggests Villa are in for nothing more rewarding than penultimate-weekend survival.  And that’s despite a fantastic League Cup win at the Etihad that’s probably as good as it gets.  On the plus side, Ciaran Clark is good, and Ron Vlaar has a great name.  But the fact is Villa are one of the weakest sides in the league.  No wonder Roberto Martinez turned them down.

So he’s finally got what he wanted.  After spending a billion pounds and sifting his way through managers like grannies choosing fruit, Abramovich has his hands on the Champions League trophy.  And is it just me, or does anyone else imagine him caressing it like Blofeld stroked his cat?

So all’s well in Russian Oligarch Land.  Chelsea are European Champions.  They’ve signed every midfielder in the world.  And their new way to get goals out of Torres is to lose all their other strikers and tell him, “Look how much we love you.  Now please score.  Because if you don’t, no one will!”

And that’s the problem.  You’d think that with all the money spent, they would have signed a striker.  United and City have four each.  Chelsea have one…plus there’s Daniel Sturridge of course.  Who, for another season, will seemingly be shunted to the wing or used from the bench.  The boy deserves better.

There’s no doubt Hazard’s got everything required to be world-class (including the attitude).  And even before his brace against Juventus, Oscar showed enough at the Olympics to suggest Chelsea had signed a little genius.  But Luiz is not a central defender.  Play him at right back.  Or in front of the back four, which would have meant signing one less midfielder and breaking the bank for Cavani.

Oh, and they won’t defend the Champions League.  It was a one-off.

In a change to the advertised scheduling, Everton have started the season well.  Which means only one thing: they’re going to get relegated.

For years, Everton were like a fifteen-year-old boy on a school day.  They’d sleepwalk through the first few periods, get an energy boost around lunch and finish on a high.  There was no reason for it.  It’s just what happened.

Perhaps Moyes is sensing the warmth of the Old Trafford hot seat.  Or perhaps they’ve finally got the strength in depth needed to compete over 38 games.  Either way, Everton are on for their best season in years.  At the end of which, Fellaini will leave for a bigger club and 30 thousand Evertonians will sell their wigs on ebay.

People say Harry Redknapp can find a bargain.  But the new king of wheeler-dealing is Martin Jol.

With Petric, Kacaniklic and Rodallega all signing for free, and Berbatov for only £4million, that’s fantastic business whatever the club.

With a solid defence that have played together for years, a creative, experienced midfield and the potential for magic up front, Fulham could be the not-so-surprise package of the season.

The problem is, in about a month Berbatov will remember he doesn’t enjoy football that much and start walking round the pitch like someone who’s lost his contact lens.  While Jol’s voice will drop another octave and his players won’t be able to understand him…it’ll just sound like those boat horns you hear in the dead of night.

Either that or they’ll qualify for the Europa League again.  And next season they’ll be completely screwed.

Brendan Rodgers’ start at Liverpool has proved one thing.  It wasn’t his football philosophy that Swansea displayed last season.  Those foundations were laid by Roberto Martinez and Paulo Sousa and continue to be shown under Michael Laudrup; so all those Liverpool fans hoping for tiki-taka football have instead seen comedy goalkeeping, a lack of forward thinking, and a forward who can’t think.

For all Luis Suarez’s bustle and obvious talent, he’s an appalling finisher.  Give him ten chances and he might score one.  But at least he runs around a lot.  And I know it’s been written countless times already, but the way Rodgers dealt with Andy Carroll was nothing short of shambolic.

On the sort-of-plus side, luck hasn’t paid a visit to Anfield for some time now.  Sunday’s game against Manchester United the perfect example.  Just for the record, it wasn’t a penalty, but it was a sending off.  Plus Joe Allen, Jonjo Shelvey and Raheem Sterling point to a brighter, younger future.

But Liverpool fans don’t have much to look forward to this season.  Still without a league win and with no prolific finisher until at least January, the best they can hope for is a mid-table finish.  It’s been coming for a while, but finally and unquestionably, Everton are the best team on Merseyside.

There is a lot to admire about City.  They have unquestionably the best ‘keeper and the best centre-back in the league.  They are the closet thing this country has to Barcelona.  And Mancini can make even a blue-and-white scarf look sexy.

But they also have Mario Balotelli, who I sometimes suspect is actually a twelve-year-old boy who made a wish at an unplugged fairground attraction and now lives in the body of a man twice his age.

Plus they’ve forgotten how to defend.   In fact they’re without a clean sheet all season.  And that’s even with the departure of Stefan Savic.

It’s no coincidence that Fergie steers clear of African players.  When Yaya Toure leaves for yet another African Cup of Nations next year, he takes with him the heart of his team.  When Toure doesn’t play, simply put City aren’t City.

They will not win the European Cup.  They won’t even make the quarters.  Money can buy a league, but only when aligned with experience can it win Old Big Ears.  Just ask Abramovich.  They might win the title again, but defending it is a whole different challenge so they’ll be praying Hart, Kompany and Tevez stay fit and Garcia proves an able deputy for Toure.  And this year’s strop will come from Edin Dzeko.

And so to the team who haven’t played well in about three years.

But isn’t that the sign of champions: to win when not at their best?  Perhaps…but United fans should be worried if they think their team can keep churning out mediocre performances and still have trophies rolling in.  Barcelona have off-days.  United have off-months.

They still win; often convincingly.  But those results are usually at home.  Away from home…they scrap.

The good news is that Alex Buttner (despite looking like Lisbeth Salander’s perfect match) is an exciting replacement for the trundling Patrice Evra, whose performances over the last two seasons show the danger of not paying attention to best-before-dates.  And RVP and Kagawa are exactly the type of player Fergie needs to get even close to the Champions League final again.

But Rafael is an accident waiting to happen.  He’s cost them in Europe before and he will again.  And their midfield lacks both dynamism and drive.  They’ll still win 90% of their games.  The problem is it’s the other 10% that really count.

Last season’s surprise package have a lot to do to get even close to that year’s remarkable achievements.  But firstly: a word on Graham Carr.  Don’t know him?  Well you should.  Because he’s the man who spots a bargain better than my dad at a boot fair.  As Newcastle’s Chief Scout he has pointed Alan Pardew in the direction of, among others, Demba Ba, Papiss Cisse, Cheik Tiote and Yohan Cabaye.  Players bought for pennies (and in some cases not even that) who turned out to be exactly what the bigger clubs needed.

And there’s the problem.  They’ve held on to them for now.  But a dip in form this season and they’re off.  Manchester United’s midfield problems could be solved in an instant with a quick shop at, what’s it called now…the Sports Direct Arena?   And Chelsea wouldn’t have to mollycoddle Torres so much if they had Ba or Cisse to replace him.

So here’s the deal for Newcastle.  Do as well or better than last season or you’ll lose your best players.  And without them…you’ll be relying on Gabriel Obertan!

Chris Hughton’s a really nice bloke.  I think he’d make a great neighbour.   But as a football manager, I’ve never been convinced.  He did a good job at Newcastle, winning promotion from the Championship before being unfairly sacked by Mike Ashley the following season.  And he did an okay job at Birmingham, leading them to fourth in the second tier.  But imagine him getting angry.  Go on.  Think of him going mental at halftime.  You can’t, can you?  He’s like that nice teacher who wanted everyone to like him and felt embarrassed shouting.

And that’s why as Paul Lambert’s replacement I think he’ll struggle.  Replacing an angry Scotsman with a polite bloke from Forest Gate seems too much of a risk.  And no wins from five isn’t about to prove me wrong.

Norwich could be the latest in a long line of clubs to suffer second-season-syndrome.  They have talent aplenty with the likes of Snodgrass, Ruddy and Holt.  But in a game that so often comes down to strength in depth, it’s not looking promising.  But I do like their shirts.