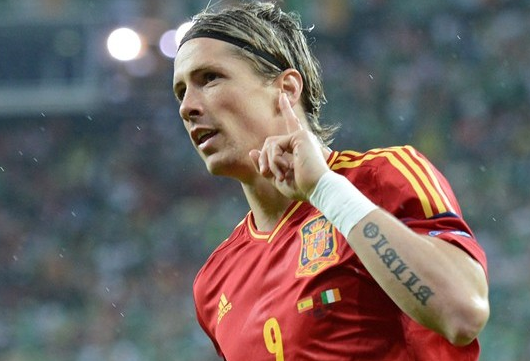 With nothing but a second World Cup on the mind of Vincente Del Bosque, the Spain boss recently named a strong squad in his deck of cards that he’s taking to Brazil. In that deck lies a joker; the card that has the ability to change the game, Fernando Torres.

No matter what his critics say about his consistency, Fernando Torres is still a top player, and top players perform when it matters. Torres has played the part on the big stage multiple times throughout his career, for both club and country. One of the most famous goals of his career reflect this, the goal against Barcelona at the Camp Nou that sealed Chelsea’s passage to the Champions League final dream. El Nino ran the ball from halfway from an Ashley Cole clearance and remained composed to dribble past Victor Valdes before dispatch the ball into the back of the net. A goal, arguably just as big as the latter, gave Chelsea a cornerstone for their only silverware last year. His strike against Benfica in the Europa League Final gave Chelsea a 1-0 lead in the Amsterdam Arena. He again carried the ball around the keeper and passed it into the net.

Another great, composed goal Torres also managed to score was within the opening eight minutes against the 2013 champions league winners Bayern Munich last year in the UEFA Super Cup. He expertly fired the ball into the back of the net first time from an Andre Schurrle cross.

Time and time again Torres has shown that although his form is inconsistent, he can still deliver when all eyes are upon him. He took those three goals with ice-cold emotion and killer instinct, reminiscent of his liverpool days. Del Bosque no doubt appreciates this attribute, and it is why he will be key to Spain when it comes to the knockout stages if Diego Costa isn’t fully fit. He can deliver when the atmosphere is tense and can be relied on when other players may crack under the pressure.

Although he had a lacklustre season for Chelsea, Del Bosque remained loyal to Torres who was a part of the World Cup winning squad and the top scorer of the Euro 2012 campaign Spain won. When he plays for Chelsea, he is weighed down by the 50 million pound shackle around him, but on the international stage he is free. It is in these matches he shows glimpses and flashbacks of his liverpool days. He shows why he is still among the world’s best dribblers and pulls off tricks and skills at ease. His stepover pass to Juan Mata in the first half of Spain’s recent friendly victory showcased the confidence he has when wearing the famous red of Spain.

Torres’ international record for Spain is quite impressive, the third all-time top scorer for the national side. He has also managed to win the golden boot in the last two international tournaments he has participated in; three goals and one assist earned him the award at the Euros 2012 and five goals was enough for the honour at the Confederations Cup last year in Brazil.

Another reason Vincente Del Bosque selected Torres over Manchester City beast Alvaro Negredo and Juventus hitman Fernando Llorente is because he provides more to the Spanish national side then a striker sitting up halfway. He links up with great chemistry to his teammates, especially with Juan Mata in the side. He constantly creates chances for his compatriots through his vision and movement, gutting open opposition defences at times with deadly balls. Torres also drags defenders away with his clever runs in behind and around the back four, never taking a moment to stop harassing them.

Even if Diego Costa is fit to start in the knockout stages, Fernando Torres gives Vincente Del Bosque a great option off the bench or start over the Atletico Madrid talisman. Torres’ ability to rise to the occasion, great record in the Spanish national shirt and chemistry with his teammates are what will make him a threat to every nation in Brazil this summer.