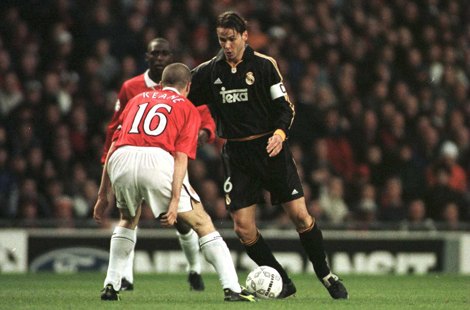 Throughout the years it has been common that football teams have become synonymous with their most influential/best player, the one man who has been instantly identifiable as ‘Top Dog’ with team-mates, pundits, sports writers and supporters alike; The alternative to Basketball’s ‘Go-to guy’, who, when his side needs a score in the final seconds of a close match, be it to win or to force a tie, is the guy to whom the ball invariably goes for that crucial shot on the buzzer.

Think of Argentina in 1986 and instantly Diego Maradona springs to mind. Total Football’s Holland side of 1974 was led by Johann Cruyff. For USA ’94 surprise package Bulgaria, the volatile Barcelona striker Hristo Stoichkov was King.

Nor does it just lend itself just to international football. Throughout the history of time, club sides have lent themselves to the same analogy, where one player is either signed to instantly come in and take-over as the main man – think Newcastle United’s purchase of Alan Shearer in 1996, with Les Ferdinand’s demotion from the number 9 shirt, hallowed amongst the Toon Army supporters, to number 10  – or is organically harnessed from within to eventually reach his position as the team’s leader, becoming synonymous with what eventually becomes referenced as ‘his’ club – Prime modern-day examples being that of Liverpool and Steven Gerrard, as well as Francesco Totti and Roma.

But much like television shows where you aren’t interested in just the star, but would rather be kept up-to-date with what is happening in the lives of members of the supporting cast – the American teen-drama The OC proving a case in point, where although the brooding Ryan Attwood, played by Benjamin McKenzie, was the main protagonist, around who the show revolved, it was his best-friend and adopted brother, the more jovial, light-hearted Seth Cohen, played by Adam Brody, whom I followed with a keener interest.

I have often found myself more drawn to footballers who aren’t necessarily the star of their respective sides, however can be found to be doing a quite exemplary job, often proving themselves to be outstanding performers, but whose light doesn’t shine as brightly as their more illustrious team-mates.

Therefore, here are salutations to six of the all-time best, players who were never viewed as making the ascension to the point of being “The Man”, who never truly made a side their own, but who have proved to be outstanding in their own right.

In no particular order:

“He is an extraordinary player who is never wrong,” says his Barcelona team-mate Xavi (2011)

Make no mistake, behind all the play-acting and the feigining of injury, Sergio Busquets is an outstanding footballer. Tactically astute, he’s what Eric Cantona would call a ‘water-carrier’, someone who allows the better players to play, who doesn’t mind doing the dirty work for the greater good.

However, don’t be fooled into thinking that that’s all the 24-year-old Busquets is good for. The Spanish World Cup winner is an excellent passer of the ball, who rarely wastes possession, and transitions play from the defensive to the attacking third with almost metronomic precision and regularity.

In 100 years, when historians look back at the annuls of European football, they’ll see the name Clarence Seedorf and think “Look what he won…Can’t have been bad this fella!’.

With excellent technique, vision, capable of beating his man and able to dictate play, not to mention his ability to fulfill numerous on-field roles, Seedorf has been one of Europe’s premier midfielders for the last two decades. But he is rarely spoken of in such grandiose terms, and has often been overshadowed by more eye-catching team-mates (Ajax – Rijkaard, Sampdoria – Mancini, Real Madrid – Raul, Roberto Carlos, Inter – Ronaldo, Milan, Shevchenko, Kaka). Indeed, there are many who have truly undervalued Seedorf – most notably the Inter directors, who traded the Dutchman to rivals Inter in 2002 for the Italian full-back Francesco Coco.

Nonetheless, the fact remains that Clarence Seedorf, since breaking through at Louis van Gaal’s Ajax in 1992, has gone on to have an outstanding career. He has won everything there is to win at club level – the first player to win the Champions League four times & with three different clubs – playing for some of the most elite clubs in Europe during his 20-year career.

“I was surprised when McManaman was left out of the last England squad. I couldn’t believe they would ignore a player of his quality” – Zinedine Zidane (2002)

The first British player to win the Champions League twice and the first English player to win the Champions League with a non-English club, but Steve McManaman’s distinguished playing career is often forgotten. ‘Macca‘ made 364 appearances for Liverpool during his nine-years at the club, but is long remembered as a member of the so-called ‘Spice Boys’ who offered so much, but in terms of trophies, delivered very little, and who saw out the end of his contract before a lucrative Bosman free-transfer to Los Merengues.

However, a clever passer, talented dribbler and with an eye-for goal, McManaman proved himself at the Bernabeu to be one of England’s finest talents, putting in a man of the match performance during the 2000 Champions League final win against Valencia, before overcoming president Florentino Perez desire to sell him, so as to help fund the initial ‘Galacticos’ intake, and in-doing-so, ‘El Macca’ became a cult hero with the Madridistas.

For England, McManaman was always an enigma, a player who made a mere 37 international caps, but who was only trusted by Terry Venables. Whilst Venables indulged McManaman, the likes of Glenn Hoddle and Sven Goran-Eriksson weren’t willing to adapt their rigid tactical structures to fit him into their sides, which were always found to be lacking that bit of fantasy, something which McManaman could have offered.

Whilst the likes of Ruud Krol, Frank De Boer and Ronald Koeman are often pin-pointed as the archetypal classy Dutch defender, the name of Danny Blind is often overlooked. A solid defender, capable of playing both as a full-back or as a centre-half, Blind was also very gifted technically, capable of starting attacks and orchestrating those around him. Blind was the lynchpin and on-field leader of Louis van Gaal’s 1995 Champions League winners, the experienced platform which allowed van Gaal to accomodate the likes of Litmanen, Overmars, Kluivert and Seedorf into his side.

Blind joined Ajax in 1986 as a relative unknown, signed by then manager Johan cruyff to replace the out-going Koeman, reportedly to the disappointment of Marco van Basten who had wanted a bigger name signing. Nevertheless, by the time he hung up his boots 13-years later, he had five league titles and four KNVB cup’s to his name, whilst he also became the only Dutch player to win every continental cup recognised by Fifa – A feat only equalled by four others.

Watch the 1970 World Cup final and witness arguably the greatest performance by any side ever, as Brazil dominate Italy at the Azteca Stadium with a performance of such control and beauty. You’ll note the outstanding attacking performances of Pele, Tostao, Jairzinho, but the man who made it possible was the scorer of the games crucial second goal, the deep-lying playmaker Gerson.

The former Botafogo star remains reverred within Brazil, but on a global scale much of his genius – his ability to retain, recycle and distribute possession – has been lost over the years, with him perhaps most remembered for ripping up Pele’s list of the 100 greatest footballers on live television.

In that 1970 final, Gerson was named man of the match, the composer of attack after attack, effortlessly finding space in his deep-lying midfield position, before finding his team-mates with pin-point passes time and again. An outstanding midfielder, one of the best passers in the history of the game who didnt have a bad eye for goal either, having netted over 200 times in his career.

“The best player in his position” – Ivan Zamorano

Fernando Redondo remains recognised in Madrid as one of Real’s best players in the last two decades. But further a field, Redondo simply doesn’t get the respect he deserves and who is often-forgotten, due to the relatively short-period he had playing at the very top level.

During his six-year stint at Real Madrid, which encompassed two European Cup wins and two Primera Division titles, Redondo was one of Europe’s pre-eminent midfielders. An excellent passer, a fantastic athlete, strong and aggressive in the tackle, Redondo was the classic Argentinian ‘number 5’, and then some – witness his embarassment of Henning Berg at Old Trafford during Real Madrid’s 3-2 win in March 2000.

However, despite captaining Real to that year’s Champions League, Redondo was sold to AC Milan that summer, having been critical of Florentino Perez and his Galacticos strategy, for whom a horrendous run of injuries saw him make a mere 16 appearances in four years and which saw Redondo quietly move into retirement.