The 20th running of FIFA’s highlight of the football calendar begins this month in Brazil as the country hosts their second ever tournament following their running of the 1950 event. That tournament saw the infamous ‘No Final’ tournament as the competition ended with a four side Round Robin playoff that saw Uruguay’s 2-1 win over Brazil counted as the de facto final and the Uruguayans lifted the Jules Rimet trophy for the second time. 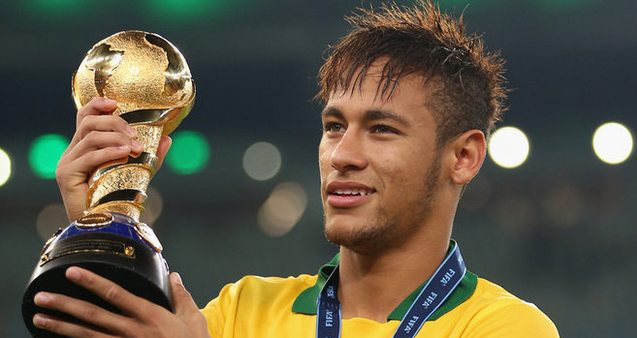 To celebrate the second hosting of this showcase event by the Brazilians our football expert takes a look at the top strikers for the host nation both from the present side and from the past.

The 22-year-old versatile attacking player who is capable of playing both as an out-and-out striker and on the wing, or even as a combination of the two in the wing forward positions, has the weight of a nation on his shoulders this summer. He has bagged an amazing 31 goals in 49 matches for his country since his 2010 debut. After guiding Brazil to victory at the 2013 Confederations Cup with four goals as he won the Player of the Tournament award, the nation is expecting him to deliver the first trophy in this biggest and best of FIFA football competitions since 2002. The youngster certainly has bags of ability and talent to shine, making him the pick of the bunch from the Brazil squad for this summer’s tournament.

Despite hanging his boots up for the last time for Brazil following the 2006 tournament in Germany, Ronaldo still holds the record for most goals scored by one player in all of the past versions of the competition being held in Brazil this summer. The now 37-year-old who has been touring both his homeland and the world playing online poker with shocked players – (as well as being shocked himself) – as he promotes PokerStars in São Paulo, has scored 15 goals in his 19 appearances at the 1998, 2002 and 2006 tournaments and he is backing Neymar to shine this summer, like he did at such a young age. He says “Neymar is an incredible guy, a great player, a youngster like I was in the first World Cup I played, which was in ’98. I’m sure he’s very calm, he can handle the pressure well. He’s a player who’s shown that over and over. We have high hopes that he will be the best player in the tournament and that Brazil will be champions.” Can Neymar shine this summer like Ronaldo did in France 16 years ago and lead Brazil to the final?

No list of top Brazilian forward players is complete without Pelé. As the all-time goalscorer for the country with 77 goals in 92 matches. He is the player that all Brazilian strikers will be compared to for as long as time exists. He played in four FIFA summer tournaments between 1958 and 1970, and he lifted the Jules Rimet trophy on three occasions during this time securing the trophy in the possession of Brazil for all time. He netted 12 goals in 14 appearances in the tournaments and you can be confident that the living legend that is Pelé will be at the final at the Maracanã on July 13th and, if Brazil claims their sixth title, the 73-year-old will be one of the first onto the field in celebration!

Although most famous for getting a Turkish player sent off at the Japan/Korea 02 competition, Rivaldo was an impressive forward player for the Brazilian national side in that tournament as well as the preceding tournament in France. These two tournaments saw the then Barcelona player bag eight goals for his country as Brazil reached the final, only to lost to the hosts, in France ’98 and then win the 2002 running of the tournament. He finished the second highest scorer in the 2002 competition, second only to Ronaldo, with five goals as he found the net in each of the opening five games. But this is often overlooked for the incident against Turkey that saw Hakan Ünsal red carded after kicking the ball back to Rivaldo at the corner flag, hitting him in the thigh. The striker went down holding his face and the defender was sent off. Despite this gamesmanship, his record for Brazil in front of goal should not be forgotten.

Neymar may have plenty of goals for Brazil up to this point, but he has a long way to go if he is to match the achievements of some of the other Brazilian legends. Can he take the first steps to joining them and their famous status level in his homeland this summer?