We’ve reached the business end of the 2014 list with one player coming out of relative obscurity to gate crash the top 10, while another has dropped from third spot in 2013, and Bayern Munich make their presence felt with a couple of inclusions. 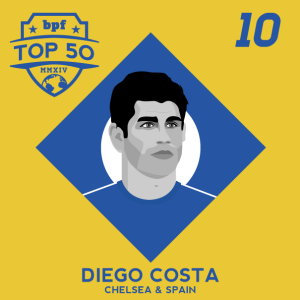 A striker with South American origins, who has a short fuse, who learned football from the street and his infamous for his temperament and street-fighting attitude.

From the introduction you could think that I was talking about Barcelona’s Luis Suarez, but the fact is, I am not. I am taking about Chelsea ‘s new talisman, Diego Costa.

2014 has been a year in which Chelsea have had a striker problem and solved it and a year where the La Liga was won by  a team other than Real Madrid or Barcelona for the first time in 10 years and Diego Costa has been the reason for both.

Costa scored 12 goals for Atletico Madrid in 2014. He has been there when the team needed him and scoring a penalty in the Champions League semi-final against Chelsea at Stamford Bridge to give his team the lead is only proof of this.

Diego Costa has scored many notable goals. His goal against Getafe in 2013 has been nominated for this years FIFA Puskas Award  and another of his goals ended in an injury because Costa smashed his knee into the goalpost in the process of getting on the end of the cross that was sent his way.

It is this kind of determination, tenacity and fighting spirit that has made him a hit in the Premier League. Whilst other strikers may have needed time to “get used to the Premier League’s speed and physicality”, Costa has exploded straight into form, scoring a goal on his debut and as of the 12th of December, he has, 11 goals in 12 appearances with a goal every 83 minutes.

He has been credited for his great start to the Premier League, winning the Premier League Player of the Month in August. With a derby goal and a hat-trick already to his name, Chelsea can expect Costa to fully repay the £32 million spent on him, in goals. 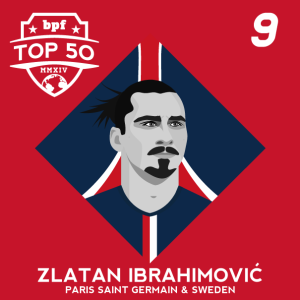 It’s difficult to find the right word to describe the last 12 months for Zlatan Ibrahimovic. He may have won the Ligue 1 title while scoring 26 goals, but when he looks back, it may be a case of, what could have been.

2014 started with the Paris Saint-Germain forward coming fourth in the 2013 Ballon d’Or award. From January to May he scored 11 league goals in 15 games as PSG finished nine points ahead of Monaco in Ligue 1.

It was the Parisians second straight Le Championnat crown, they would also do the double by winning the Coupe de la Ligue.

However, the competition that would ultimately evade them was the Champions League. It’s the one trophy that Zlatan has yet to win and he will be disappointed in not being able to play his part.

Against Chelsea the Swedish forward was injured in the first-leg and missed the crucial game at Stamford Bridge as Chelsea went through 3-3 on aggregate. With their talisman in place, who knows what could have happened in the second leg.

Zlatan’s other target for the season was to try and beat Jean-Pierre Papin’s feat of scoring 30 goals in a Ligue 1 season. In his first season Ibra equalled the Marseille legend, and was expected to pass him in 2014.

With nine games still to go, Ibra had 25 goals and it looked like nothing could stop him. The Chelsea injury put a spanner in the works and his only other goal came on the last day of the season against Montpellier.

The biggest disappointment for Zlatan would have been to miss the World Cup in Brazil, but it did mean he could start this Ligue 1 campaign fresh.

Once again the Swede has hit some bumps since the season kicked off in August. His record sounds fantastic, with eight goals in ten games, but he has missed eight games with an ongoing heel injury.

At 33-years-old, Ibrahimovic still has the outstanding ability to change and control a game on his own. He creates moments of magic that other players can only dream of, but there are signs he is slowly down.

Injuries are stopping him from playing three or four games in a row, it will hamper his ability to beat Papin’s record, but his focus will be the Champions League.

He ended 2014 by scoring against Barcelona in the Camp Nou, and he will hope 2015 starts by knocking favourites Chelsea out of the competition. 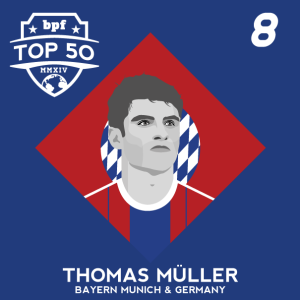 Following the World Cup Final win over Argentina, Thomas Müller, with a mock and jovial tone cried that FIFA could “stick their Golden Boot up their arse”.

Although obviously poking fun, it does hold a measure of truth; Müller can feel deserving of not only player of the tournament, but also one of the best of 2014.

The World Cup triumph capped off a success laden year for the 25 year old German; with the DFB Pokal and Bundesliga contributing to a domestic double.

Just a week ago, he added an impressive personal record to his name, becoming Bayern Munich’s all -time leading goalscorer in the Champions League with 24 goals.

As a self proclaimed Raumdeuter, or space investigator, Müller ghosts around the pitch looking for attacking positions to exploit. Despite his long legged, awkward running style, he is a fierce runner and tireless athlete who more than makes up for his lack of pace with intelligent movement.

He understands his physical limitations, and they force him to be a smarter player; as he says: “You can’t get hurt if there are no muscles. My calves are so thin, opponents never hit the bone because they’re so hard to see.”

Playing right across the front line for Germany and Bayern, Müller was able to score 30 goals and counting this year; an impressive feat considering his fluctuation amongst attacking roles.

He takes his success in his stride and as David Morris of the Bundesliga Fanatic wrote in a recent piece on Müller, “He is an ‘anti-star’, one who goes about his business quietly and does his utmost to avoid the spotlight the majority of the time. Unlike Ronaldo, Neuer and Messi, all three of whom know they are stars, Müller presents himself as an awkward and unassuming man.”

The past year has only strengthened Müller’s standing at the top of football. With Philipp Lahm, Miroslav Klose, and Per Mertesacker all hanging up their German boots, now is the time for Thomas Müller to push an enormously talented team even farther.

As Müller’s Bayern teammate, Bastian Schweinsteiger, remarked “He’s a very important player for us…Particularly at the very highest level, where he can decide games for us.” 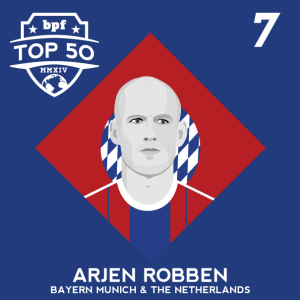 Bayern Munich and The Netherlands

At what point does greatness overcome all other obstacles? Arjen Robben’s brilliance should be attached with little doubt and yet adulation and appreciation are rarely bestowed on the exhilarating Dutchman.

If Robben exercised personal demons in 2013, 2014 was the solidification of his position among the elite standard bearers of world football.

The general assumption when Pep Guardiola took charge at Bayern was that Robben was not a Guardiola player and therefore would be surplus to requirements. Opinions were quashed as Robben established himself as Guardiola’s most irreplaceable forward.

While injuries ravaged Guardiola’s squad, the previously stricken Robben was the one constant. As Bayern emerged from their winter break, Robben continued his form in the previous year into the early stages of 2014.

He scored a hat-trick in a 5-1 home victory over Schalke, capitalising on a couple of mistakes from the Ruhr sides backline. Robben finished off a Bayern comeback against Manchester United in the Champions League quarter-finals, scoring the third in a 3-1 victory, and his manager referred to him as “a beast”.

Bayern capitulated in Europe though, as Real Madrid trampled over them 5-0 on aggregate on their way to the fabled ‘Decima’.

Domestically, Bayern broke all manner of records and coasted to a 24th Bundesliga title. Perhaps the sweetest victory was saved for the DFB Pokal final, defeating arch rivals Borussia Dortmund 2-0 in Berlin after extra time. “Pep asked me if I could keep going and I said yes. I could see Franck (Ribery) couldn’t go on any longer and Højbjerg had taken a kick to the calf.”

The newly indefatigable Robben did just that, finishing off a whipped Jerome Boateng cross to put Bayern in front after 107 minutes and heavily influencing Thomas Müller’s second.

Robben’s previously questionable fitness record was dispelled in 2014, and his boundless energy was evident again in the searing heat of Brazil. The World Cup was a glorious individual tournament for the Netherland’s attacker. Deployed as a second striker in Louis Van Gaal’s reconfigured counter-attacking 3-5-2, Robben was nothing short of outstanding.

With Spain committing forward, Wesley Sneijder won the ball back and played a piercing pass through the high line. Ramos was in prime position to cut it out, but surely didn’t bank on Robben clocking up the fastest sprint recorded in the World Cup. Robben running at 37 mph, raced past Ramos running at 30 mph. He then cut back onto his left foot, rounded Casillas before stroking home.

He scored another brilliant solo goal against Australia, inspired a late victory against Mexico in the last 16 and scored his penalty in the shootout win over Costa Rica, before they were eliminated via spot kicks against Argentina.

The ever consistent Robben has continued performing brilliantly in the new season. Defenders are painfully aware of his signature move, but are still unable to stop the cut inside and rasping left foot shot.

Bayern’s standout victory so far was the astonishing 7-1 destruction of Roma in the Stadio Olimpico. Robben scored two and tortured his former Chelsea team mate Ashley Cole in a perfect first half. Robben’s goal against Freiburg last week was his 11th in 17 games this season and his 100th Bayern goal in 181 appearances.

Many incessantly despise Robben because of his diving transgressions in the past, but he is not alone. Countless players dive, Robben is just upfront and open about it. Nothing should detract from Robben as a footballer. He is one of the best of his generation and is still improving.

An intelligent and eloquent guy, he also has an insatiable hunger to price his critics wrong. While most lose their pace in their thirties, Robben appears quicker now than at any point in his early twenties.

Guardiola has deployed him on the left wing, right wing, in behind a striker and through the middle himself. Robben has adapted and is continuing to evolve.

He is now the complete attacker. Perhaps he will eventually receive the recognition he craves. For his admirers, we can just enjoy the dynamic Dutchman while we can.

Keep an eye out for the fourth part of the Top 50, out next week!