These three players finished a long way behind the top two but can be proud of their efforts nonetheless.

A huge 2013 for a French attacker saw him jump a massive 37 places from last year’s countdown, while two crowd favourites join him in the penultimate part of the Top 50. 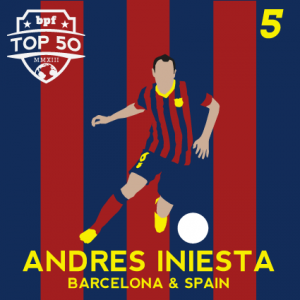 Andrés Iniesta once said, “Perfection doesn’t exist”. For those who have tracked the career of Barcelona’s Pale Knight, it might be argued that Iniesta is the exception that proves his own rule.

Able to play anywhere across the midfield, in wide positions cutting in, or even in the false nine role, Iniesta’s versatility, extraordinary work ethic, and sheer brilliance have led many to argue that it is he, rather than Xavi, who is the stand-out performer in the Blaugrana midfield.

Indeed, Pep Guardiola, who did so much to refine the style of play for which Barça are known famously said to Xavi, Iniesta’s partner in excellence, “You are going to retire me, but this kid is going to retire us all”.

Playing at a club where success is expected, Iniesta is something of a metonym for the marriage of practice, technique, and tactical discipline that has seen such expectations regularly fulfilled. Along with Xavi and Busquets, he is synonymous with the tiki-taka style of football that has served both Barça and the Spanish national side so well.

His eye for an incisive pass borders on the preternatural, and his technique and close control are staggering. His willingness to press high, tackle deftly in a way that most creative midfielders could only dream of, and strive for the collective style of play also sets him, and, indeed, the rest of the Barcelona team aside.

In May 2013, Barcelona were crowned La Liga champions for the twenty-second time with four games to spare, and ultimately won fifteen points clear of Real Madrid. They reached the semi-finals of both the Copa del Ray and the Champions League. And while some saw a decline in Xavi’s game in the 2012/13 season, Iniesta actually improved, registering more assists than ever before.

The start of the 2013/14 season heralded the arrival of a new coach, neither a graduate of La Masia or Dutch, something of a shake-up. There does seem to have been a change in the style of play: while Barcelona’s passing statistics are still the stuff of dreams, they no longer have as much possession and the number of aerial duels is increasing, not necessarily a plus for a short team.

Iniesta has started fewer games this season than might have been expected as Martino has evolved a slightly more direct style, but when he plays, he is still crucial. In December, Iniesta was shortlisted for a midfield berth in the FIFA FIFPro World XI 2013 and at the time of writing, Barça sit atop La Liga on head-to-head results.

Despite the Martino evolution, with its slight stylistic variations, it seems that Barcelona still view Iniesta as a central cog in their machine. He signed a new contract with them in late December, described by Sandro Rosell as a “great Christmas gift for all Barcelona fans”.

He is, of course, also a shoe-in for La Roja, and won silver in the Confederations Cup, as well as starting five matches in the World Cup Qualifying program which will see Spain attempt the unprecedented feat of retaining the World Cup in between their European Championship successes.

Off the pitch, 2013 has been a busy year for Iniesta too. In October, his wife Anna Ortiz stated she was pregnant with his next child, a son. Iniesta also invested another €240,000 into Albacete, the club he started at before he entered La Masia, and where he is the majority shareholder. This was to save the club from going into administration after it defaulted on players’ wages. Iniesta’s winery, Bodega Iniesta, is currently the main sponsor of the club and his father is a director on the club’s board. 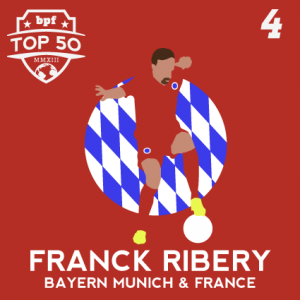 For a brief and reoccurring time it looked like Franck Ribery’s injuries would stall his full potential, but that’s in the past. This year he’s reached the height of his football career.

Crowned as Uefa Best Player in Europe, Bundesliga Player of the Year and shortlisted alongside Lionel Messi and Cristiano Ronaldo for the Ballon d’Or, it’s been a treble winning year for the 30-year-old midfielder. He played an important role in helping Bayern Munich win the Champions League, Bundesliga and DFB Pokal.

With the current celebratory atmosphere, it’s hard to imagine that only a few years ago Ribery reached one of the lowest points in his career. Injuries halted his potential and prevented him from participating in the Champions League final against Inter Milan. Then there was the off field scandal involving an underage prostitute that triggered a long court battle and only served as a further distraction.

But that’s all part of the territory. The French international has never had it easy and the scars on his face as a result of a childhood accident are a testament to the early misery life has inflicted upon him.

Fate is an unpredictable phenomenon and in this sense shares a lot with football. The lows are inextricably linked to the highs and Ribery probably understands these contradictions more than anyone. Somehow he’s managed to transform and successfully build on them.

His contribution in helping die Roten win the treble is undeniable. Yet Ribery singled out as the best player remains contentious given the exceptional talent on this Bayern team with the likes of Philipp Lahm, Bastian Schweinsteiger, Arjen Robben, Manuel Neuer and Thomas Mueller.  It’s a fair point, especially in a sport where winning is a collective effort.

But those who have followed the Frenchman’s career closely, and not as of late, will attest to his worth. Just listen to what his own teammates, coaches or the likes of Franz Beckenbauer have to say about the player. With der Kaiser even referring to Ribery as ‘the best player on the best team’ after he took home the European Footballer of the Year Award.

If football is a numerical game then the argument lies to Ribery’s disadvantage of course, but the player is better understood outside of this context. This year he’s had 18 goals and 20 assists in 44 games including all competitions. Quantitatively that’s low compared to the Messis and Ronaldos of this world. But it’s the sheer quality of his contribution that matters. It was Ribery’s assist that lead to Robben’s game winning goal in the Champions League final against Borussia Dortmund last May. He was also directly involved in the first Mario Mandzukic goal.

What makes Ribery an exceptional player is severalfold.  He has remarkable speed, that when combined with his dribbling and crossing skills, make him a fearful opponent on the left wing. The midfielder also has great ball control and ball distribution. He operates with ease in tight spaces and has an eye to find his teammates in dangerous scoring positions.

Despite his ego, Ribery is quite the unselfish player on the field, nearly the anti-thesis. He’s constantly creating chances and opportunities for his teammates. Thierry Henry put it best when he succinctly described Ribery as the ‘kind of player you want to play with.’

Yet it’s also what he does off the ball that makes him such a well rounded player and significant addition to the German side. He has a high work rate and for an attacking midfielder, he’s quite defensive minded and never neglects to track back.

While Ribery isn’t the talisman most would like him to be for his national team, he still plays a key role. He scored the first two goals for France after they were held goalless for two consecutive games during the World Cup qualifications. Although he didn’t register any goals or assists in the major comeback against Ukraine, it was his work rate, ability of drawing fouls, creating rebounds, and constantly threatening in attack that played a key role in helping his team to triumph.

With 2014 just around the corner, Ribery continues to add trophies to his cabinet. What better way to ring in the New Year than with Bayern Munich’s fifth trophy after beating Raja Casablanca in the Club World Cup over the weekend. This year appears to be the best of Ribery’s career, and I say ‘appear’ because it’s not entirely unfathomable for Bayern Munich to repeat the treble. 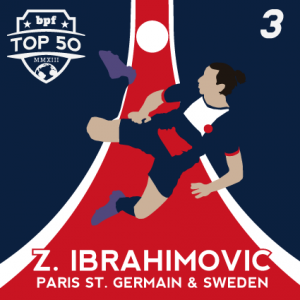 If Zlatan Ibrahimovic had put together this list, we’d probably still be writing about him in third place.

But such is his ego; he’d also have himself in first, second, fourth and fifth and every other slot that makes up Back Page Football’s Top 50.

The Swede is universally loved for his quick one-liners and his way with words, setting him far apart from the broken record sound-bites we’re so used to with most other top professionals.

And unlike most others purporting themselves in Zlatan’s profession, few in history could boast the honours list the striker has amassed throughout his career.

And, after all the travelling through some of the world’s biggest clubs – and after all the winning – Zlatan is about to dust himself off after a career year.

This season alone he’s notched 15 goals in 18 games in the league for PSG and is comfortably on course to add an eleventh domestic league title. Last season, he scored 30 in 33. A staggering twelve months from the giant Swede.

The only blip in what was otherwise a striker’s masterclass of a year, is Ibrahimovic and Sweden will not be gracing our screens next summer for the World Cup. A crying shame.

Sometimes, it’s best to hear from the man himself.  Not too long ago BPF posted some quotes from his book, I Am Zlatan Ibrahimovic, and if he can’t communicate the greatness of Zlatan Ibrahimovic then no one can.

Keep an eye out for Part 6 coming early next week!