If it wasn’t already official, it is now. Lionel Messi has been the greatest player of the the past twelve months, according to you. Here to do the Barcelona and Argentina magician justice is Ciaran Kelly.

Remarkably, to compare Lionel Messi to Pablo Picasso does not seem that hyperbolic given that both were adopted Catalans and were/are leading figures of genius in their respective fields. However, when Picasso published masterpieces like Les Desmoilles d’Avignon (1907) and Still Life (1911), some critics alluded to the fact that Picasso’s paintings were so rigid and simple that it was, in their eyes, just paint by numbers. They wanted to see Picasso move away from the modern and elitist Cubist movement into something more recognisable and incessantly compared his work to that of the traditional and more photograph-like bygone era of art. From this, it was perhaps no surprise that it was not until after Picasso’s death in 1973 that his legacy was so widely celebrated and recognised, and was what epitomised Spain post-Franco from 1975: rebirth, revolution and colour.

With Messi, rather than rejoicing at the brilliance of the man, a la the tennis public’s recognition of Roger Federer’s peak years from 2003-2007, there are some who just cannot appreciate his talent in the current sphere due to the fact he plays with such world-class players around him. Even if these critics get over this ‘fact’, they still continue to measure Messi up against the elite pantheon of Diego Maradona, Pelé and Johan Cruyff – who, seemingly, in some critics’ eyes, never got the chance to play with such an incredible supporting cast. There is little appreciation for the fact that Messi, along with the likes of Gerald Piqué, Cesc Fàbregas, Xavi and Andrés Iniesta, spent thousands of hours, initially at La Masia and then at Ciutat Esportiva Joan Gamper, honing the patterns that make Barcelona the devastating outfit they are today.

However, without even addressing Messi’s mesmeric dribbling, incredible first-touch, unplayable acceleration, defence-splitting passes, often underrated work-rate, magnificent skill and brilliant composure in one-on-one situations, the Argentine is the embodiment of what a footballer should be. The 24 year old is humble, partly due to the fact that he needed daily growth hormone injections in his legs for three years from the age of eleven to eventually elevate his 4ft 2 stature to 5ft 6 ½, but mainly because he realises how lucky he is to be playing football, let alone for Barcelona, and this is reflected in the good spirit he plays the game in – that was taught all those years ago in Rosario and La Masia.

In hindsight, Messi’s initial weariness of his Barça team-mates as a 16 year old may seem odd, given his clear popularity within the club from an early age, but unlike prodigious and outspoken talents such like Wayne Rooney and Neymar, Messi had been away from hometown for three years and his favourite pastime summed up his initial inwardness: playing his Playstation. Nonetheless, Messi was soon well aware of the dangers of the demons of football. Even though the then Barça B coach, Josep Guardiola, played a key role in weaning Messi away from the Gaucho clique of Deco, Edmilson, Thiago Silva, Sylvinho and Ronaldinho, and their associated off-the-field activities, it did not seem that a Samba lifestyle would be the ultimate downfall for the prodigious 16 year old.

Instead, it seemed, it would be injuries. Evidently delicate, Messi’s fitness and consistency under Guardiola in recent years has been nothing short of miraculous and owes much to the fact that after yet another hamstring injury, suffered against Celtic on 4 March, 2008, the club devised a unique stretching routine and diet plan (Messi, up to then, had stuck to Argentine staples like beef instead of fish), and Juanjo Brau was brought in as a personal fitness coach when Guardiola arrived that summer.

Along with the departure of Ronaldinho, and with it a freer role, Guardiola’s careful management has allowed Messi to blossom. The Argentine has won the past three Ballon d’Ors, joining an exclusive pantheon alongside Michel Platini and Marco van Basten. He has  scored 216 goals in 302 games (only 19 off César Rodriguez’s all-time record of 235, which was amassed over fifteen seasons from 1942-1955), with incredible returns of 47 goals and 11 assists in 53 matches in 2009/2010, 53 goals and 24 assists in 55 games in 2010/2011 and, so far, 36 goals and 17 assists in 33 matches in 2011/2012. And, at just 24 years of age, has become the ultimate adopted Catalan and already far exceeded the achievements of club legends like László Kubala, Luis Suárez, Sándor Kocsis, Johan Cruyff, Diego Maradona, Ronaldo, Romário, Hristo Stoichkov and Rivaldo with 5 La Liga titles, 3 Champions Leagues, 1 Copa del Rey, 2 Club World Championships, 2 European Super Cups and 5 Spanish Super Cups.

The past year has also seen Messi do what greats like Cruyff accomplished: ‘innovate’ a position. Cruyff was theTotal Voetballer, the general who marshalled Rinus Michels’ philosophy, and with his constant, self-driven and unmarkable rotation from centre forward to roaming winger to second striker, Cruyff pioneered his own indefinable free role position. Messi, in a throwback to the likes of Matthias Sindelar and Nandor Hidegkuti, has brilliantly re-defined the deep-lying number nine position. From this, centre backs and seemingly impregnable foundations and partnerships, such as Nemanja Vidic and Rio Ferdinand, have been befuddled (was clearly evident with Messi’s glorious dribbles and finishes against Racing Santander, Real Sociedad, Real Betis and Espanyol in La Liga and Copenhagen, Arsenal, Real Madrid and Manchester United in the 2010/2011 Champions League, and his goals against Racing Santander, Santos and Malaga in 2011/2012) on whether to mark and lose a man or leave space and foolishly let Messi openly accelerate.

Without even addressing the stunning nature of that opening goal in the Morbo-filled El Clásico first-leg, it was the antidote football so badly needed: a reminder of the bygone era where cunning, spontaneity, courage and brilliance took precedence over play-acting, negative tactics, petulance, violence and cynical tackling. Also, somewhat remarkably, Messi has become Barcelona’s focal attacking threat without being a traditional goalscorer, be it his incredible skill, light physique or a lack of traditional hold-up play. It has been a profound evolution, from his early explosions as an operator on the byline, and Messi’s spontaneity (refuses to analyse matches in hindsight), accelerative speed and quickness of thought has already dwarfed that of even the great Diego Maradona.

Still, though, one issue remains: Argentina. 2008 Olympic gold medal winner Messi could have played youth football for Spain, yet chose to play for La Albiceleste and with his strong Argentine accent, even in speaking Catalan, it is clear that he is a conscious patriot. Nonetheless, players like Gonzalo Higuain (born in Brest, Northern France) and Carlos Tévez (mercenary) are still considered to be more ‘human’ and Argentine than Messi. In reality, this is down to the fact that the magnificence that Messi has displayed for Barcelona has simply never consistently occurred with Argentina and that has ludicrously led to fans questioning  his commitment.

Messi’s time with Argentina has been blighted: a sending-off for a headbutt within two minutes of his debut against Hungary on 17 August, 2005; 21 goals in 77 appearances (29% strike-rate); a failure for any of his previous managers to set-up the team in the best possible fashion; and, quite simply, Argentina having a poor overall pool of players, despite their incredible array of forwards, with their recent squad including out of form veterans like Martin Demichelis, Pablo Guiñazú and Germán Denis.

Despite being more noted for his awe-inspiring ability rather than his vocal influence, Messi was handed the captaincy to usher in Alejandro Sabella’s reign. The armband will, ultimately, either inhibit Messi or be the making of him as an international player. Having already netted two goals (7 October goal against Chile was his first in sixteen competitive internationals) in four games in the World Cup qualifiers, including an inspirational performance owed to Sabella’s use of the trident of Higuain, Sergio Agüero and Messi in the recent qualifier against Colombia on 16 November, the latter may prove be the more accurate.

So, while many believe Messi leading La Albiceleste to glory in 2014 or 2018 will be the ultimate test, given that he will only leave Barcelona to return to his homeland at the end of his career, as opposed to another European giant, it may not be so readily achievable. One often forgets that Maradona’s class of 1986 still contained the important foundations and contributions of the likes of Jose Luis Brown, Daniel Passarella, Oscar Ruggeri, Jorge Burruchaga and Jorge Valdano under the near-revolutionary (unprecedented 3-5-2 brought the very best out of Maradona, who operated as a free-roaming second striker) tutelage of Carlos Bilardo. Also, Messi’s case will not be helped by inevitable burnout in the coming years, with Guardiola rarely able to leave Messi out of the squad altogether due to a perceived lack of squad depth.

Even though Messi is operating in an era after the liberalisation of the offside law (Arrigo Sacchi used to play a 25-yard high line with Milan,which led to more offsides and easy implementation for defences), less harsh referees (Maradona was constantly hacked, without reward, at the 1982 World Cup), better pitches and lighter boots, tactics, fitness and defenders (astute and athletic) have never been so sophisticated. However, without getting into the endless trivial debates about what might have happened had the Ballon d’Or been open to non-EU nationals pre-1995 and matters, among others, such as whether Pelé would have thrived as much at club level in Europe, there is no doubt that one debate today is redundant: Lionel Messi is the greatest footballer in the world.

The Top 50 is in association with the Art of Pele. 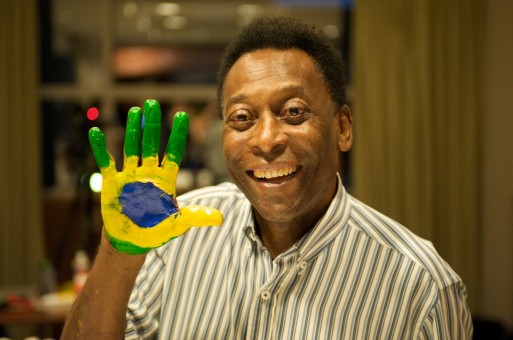 Edson Arantes do Nascimento, or Pelé as he is known across the world, is considered to be the greatest footballer the world has ever seen – the youngest player ever to win a World Cup (three in total); scorer of 1,283 professional goals – 12 of them in World Cup final tournaments; and “Athlete of the Century”, awarded by the International Olympic Committee in 1999.

In celebration of his achievements Pelé has created a colourful series of artwork that capture the many special moments throughout his truly legendary career. Each piece interprets the significance of defining moments in his life, translating them into vibrant and colourful images. The Art of Pelé brings his story to life – on canvas. Find out more by visiting www.artofpele.com.