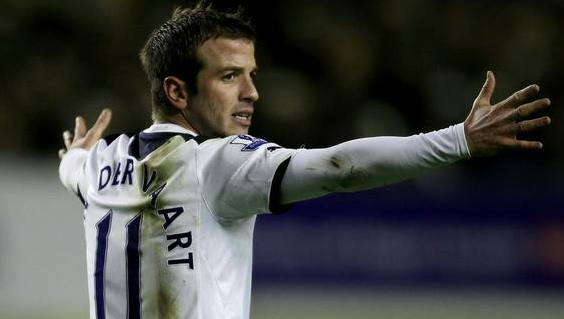 After my posts on the top 10 underrated and overrated Premier League players generated a lot of interest and debate, the next step was to look at the mavericks; the inconsistent or bone idle selection of players whose attitude to the game is perhaps holding them back from reaching the height of their obvious potential. My countdown starts here:

As he is currently proving on loan at Tottenham, the Togo International is a fantastic player; he just doesn’t demonstrate this blatant ability on a consistent enough basis. A 30-goal haul during the 2007/08 season at Arsenal thrust Adebayor into the spotlight as a striker with immense quality: strong, quick, tricky, powerful: a hybrid between Didier Drogba and Kanu was the popular comparison at the time. The following season however he demonstrated petulance, arrogance after demanding a salary equivalent to Thierry Henry, and a subsequent lack of effort on the pitch. He still misses too many chances and has an awful grasp of the offside rule but as frustrating as he can be, Adebayor is still someone you’d want in your team.

The Newcastle forward can go from being a complete donkey to a fan’s favourite in an instant. And vice-versa as the fans have too often discovered. Injury problems have also somewhat stuttered Ameobi’s career. He has notoriously never represented neither his country of birth, Nigeria, nor England, for whom he made 20 U21 appearances, at senior level but on his day, he is genuinely one of the most dangerous strikers in the Premier League. His physical presence and ability in the air make him a real handful for defenders and his career is littered with a variety of goals, his latest net-buster a brilliant left-footed drive against Tottenham.

Whilst his work-ethic on the pitch has never really been questioned, the Welsh striker-cum-winger has always carried a bit of an attitude problem, which has got him into trouble with the police as well as various managers, players, referees and fans. The fact that he has never had a prolonged spell with a club is indicative of the way he splits opinion; pulling on the colours of five different teams in the last six years. When settled on the pitch, however, he is a real asset with his blistering pace and clinical finishing. His talent was enough to convince Kenny Dalglish to bring him back to Liverpool where he has excelled thus far.

Only one place to begin with the Argentine striker: bench-gate. Or whatever title you want to slip the event under. You’d have to be a special sort of character to refuse to come on as a substitute in a Champions League game. This outrageous decision by the player led to Roberto Mancini refusing to ever play him again. Tevez has claimed he is homesick, with his children living in Argentina and has hinted of a move back to South America. The pending transfer to AC Milan is then most bizarre. Having won just about everything he could with Manchester United, he performed the unthinkable by moving across the city, where he became a fans’ favourite at Eastlands with his energy, supreme skill and handy habit of finding the net. A truly world class player’s reputation has been tarnished and he may never return to the level he looked like staying at for many years to come.

Tottenham’s Dutch playmaker is another certainty for the list of inconsistent performers. As he has proven on a number of occasions for Spurs, he is capable of moments of inspiration that can turn a game on its head. However he also has a tendency to go missing, often in the big games. His attitude when being substituted is another thing that needs to be worked on; whilst it’s admirable that a player always wants to play, you should respect the manager’s decision and not show such petulance when being taken off, or when being played out of position as he has found himself a few times recently. As well as contributing plenty of assists, Van Der Vaart also averages a goal every other game in the Premier League. With a bit of fine tuning and greater consistency, there’s no reason why he can’t be one of the very best players in Europe.

Despite being an absolute talisman in the Championship for QPR, Taarabt has failed to live up to the massive hype he created for himself in the Premier League. Blessed with incredible skill, the Moroccan midfielder is a lethal weapon when playing at his best; able to dribble through an entire defence or score from 30 yards if he fancies it. Unfortunately for Rangers fans, that has not come to fruition since their return to the top flight thus far. Taarabt also brings with him a stinking attitude and a frequent refusal to pick an easy pass to a teammate, instead searching for personal glory. Warnock has done a decent job in taming him but he will want the electric performances to return if QPR are to prolong their stay in the Premier League.

It’s fair to say that Carroll has become something of a cult figure amongst opposition fans recently. His failure to even get on the pitch, let alone make an impact in games, has made the £35million fee that Liverpool paid to secure the striker’s services from Newcastle that bit more ridiculous. The figure was always going to be horrifically disproportionate to his true worth, even if he had impressed on Tyneside with his unrivalled ability in the air and powerful left foot. There’s no doubting Carroll can be a nightmare to play against: he’s an old fashioned target man but with modern technique, but unfortunately for Liverpool fans he has only scored five goals since his move in January. Questions over his fitness, which led to him being put on a special diet, and his temperament (he has been arrested twice for assault) remain and are preventing him from getting a regular run in the side. Unless things begin to come together for him, Carroll may find himself playing for a much smaller club, putting his International potential in jeopardy.

Nobody epitomises inconsistency more than Arsenal’s pint-sized Russian. The midfielder-cum-winger-cum-striker is equally capable of winning a match on his own as he is of making no contribution to the game whatsoever. His biggest defenders say he takes risks, reflecting the nature of his game: he always looks for the killer pass and simply, when it comes off, he’s a hero, when it doesn’t, he’s a villain. The fact that only Nani and Didier Drogba recorded more assists than him last season suggests he is doing something right; as do his four goal haul at Anfield and famous winner against the might of Barcelona. However the cynics will, perhaps justifiably so, claim that he’s done little else to light up England as he threatened to do upon arrival in 2009. A blind refusal to track back and help his teammates frustrates, but that may be due to lack of fitness; personified when Arshavin is seen hyperventilating after 20 minutes. If he imposed himself more rather than lurking on the periphery, he would be world class. At the age of 30, time to do so is running out.

With an array of skill and arguably the best first touch in the country, the Bulgarian is undoubtedly talented but has never really hit the heights a player of his ability perhaps should. Deadly in the box and effective linking the play outside it, Berbatov is a player most managers would want in their team, even if he is something of a luxury item. For long periods, in the majority of matches, his teammates have to proverbially carry him as he can often fail to impose himself on games. Last season epitomised his inconsistency, as he ended up joint-winner of the Golden Boot despite going missing in games far too frequently. The fact that 11 of his 20 goals came in three games, including a five-goal salvo against Blackburn, shows that whilst one week he can grab the game by the scruff of the neck, he can be invisible in the next. Universally acknowledged as one of the laziest players ever to grace, or should that be lounge about the Premier League, the Manchester United striker is frustrating for all who watch him and has been limited to just five league appearances this season, failing to make any significant impact. A useful squad player to bring on when seeking a bit of magic perhaps, but Berbatov will never be worth the £30million fee Sir Alex Ferguson paid for him in 2008.

Since arriving in the Premier League in 2010, it’s been difficult to keep the moody Italian out of the headlines for one reason or another. When he’s not throwing darts at youth players, giving £1000 in cash to tramps, driving into women’s prisons, struggling to put on training bibs, driving skiving kids back to school, having allergic reactions to grass or setting off fireworks in his own home, he occasionally plays football for Manchester City; pretty well it must be noted. With seven goals in 10 Premier League appearances, Balotelli has undoubtedly had a positive effect for the league-leaders on the pitch. With pace, power, a bag of tricks and the ability to score predatory goals from close-range, or piledrivers from distance, the striker is beginning to show the very best of his ability that saw him win the prestigious Golden Boy award last year. His attitude can fluctuate between nonchalance, arrogance, curiosity (Why Always Me?) and pure stupidity: even putting his crazy off-field antics aside, Balotelli has a poor disciplinary record, and was notoriously substituted in a pre-season friendly for attempting an outrageous backheel when through on goal. Manager Roberto Mancini immediately hauled him off, criticising him of disrespecting the opposition. For all his glaring shortcomings, he is evidently a brilliant footballer and is repaying Mancini’s faith in him, when he could have been dismissed a long time ago, with Jose Mourinho going as far as describing him as “unmanageable.” With as much potential as he possesses, the sky really is the limit for Mario Balotelli; he can simply be as good as he wants to be. A true Marmite player, I personally err on the side of loving him: the Premier League would simply not be the same without him.