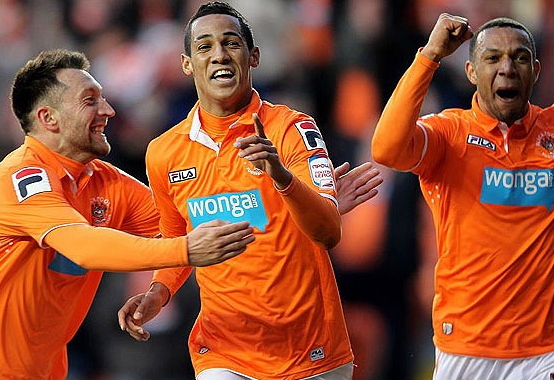 When Tom Ince made his move from Liverpool to Blackpool on 3rd August 2011 for an undisclosed fee it barely made the headlines.

Kenny Dalglish was busy enhancing his side with the purchases of Stewart Downing, Jordan Henderson and Jose Enrique whilst little attention was paid to the departure of the Stockport born prodigy.

Much is made of Dalglish’s transfer record, both Downing and Henderson have been heavily criticised, we don’t need to bore ourselves with that again, but for me it is sale of Tom Ince to Blackpool for a reported 250k that could come back to haunt Liverpool the most.

Nobody can be quite sure of Dalglish’s opinion of Ince junior at the time, the midfielder never featured in the first team picture during his tenure and when contract talks stalled in January 2011 the writing was on the wall for the then Notts County loanee.

His father, Paul, held talks with Kenny Dalgish to establish his plans for his son and urged the Liverpool Manager to feature Ince junior in the first team picture or lose him altogether.

Liverpool had the right to refuse Ince’s apparent sizeable wage demands and given the opportunity again they would perhaps stick to their principles, however, sometimes you can cut off your nose to spite your face and whilst their refusal to meet his demands at the time was somewhat correct, it looks to have deprived them of a quality young English player that would have made an impact this year.

In all fairness to Dalglish, he could perhaps be forgiven for deeming Ince not good enough at the time, he had shone at League One level but Liverpool were intent on purchasing Premier League talent and Full internationals, Dalglish, like most football managers, perhaps didn’t have the patience to wait for Ince to develop with targets of Champions League qualification and domestic success in his immediate focus.

How Ince has developed as a player since his move has been startling. With pace, trickery, confidence and an end product, he has everything Liverpool are currently lacking in the wide right department, I urged Liverpool to snap up Adam Johnson in the summer as I felt he was match made to improve their side, Ince is a player in the same mould who not so long ago was plying his trade at Melwood.

Ince shone last season as Blackpool lost the play-off final, impressing in both legs of the semi-final tie with Birmingham and scoring vs West Ham during the Wembley defeat.

Some may have thought it was a flash in the pan, but Ince has kicked on, starting this season in devastating form, scoring an impressive six goals in six league games in a solid Blackpool start to the season.

He earned the Player of the Month award for August and at the age of 20, Ince looks like he has the ability and application to become a quality Premier League player. Playing primarily off the right hand side, his left foot can be mesmerising, he can go inside and outside a defender, provide goals and assists whilst being a constant headache to full backs.

The youngster was the subject of a reported bid from Swansea in the summer transfer window and I can’t help but think that Ince would provide Liverpool with that little bit of zest and penetrative wing play that they are so lacking, if not in the starting line-up then certainly as an impact player off the bench in the latter stages of matches.

Liverpool fans have witnessed the emergence of the superb Raheem Sterling over the past year but they have unfortunately missed out on seeing another young English wide-man impressing in front of the Kop, the prospect of Stirling and Ince operating on opposite wings in a 4231 formation behind Luis Suarez is mouthwatering, it’s a shame for Liverpool fans that this prospect now looks unlikely given Ince’s increase in value.

So whilst it was Kenny Dalglish’s purchases that have garnered the most headlines, it could be the sale of a superb English prospect that is the most regretful decision of them all.

With Brendan Rogers having to work on a limited budget this season the impact of Ince could have made a difficult job a little easier and whilst it is normally football people who are laughing at Ian Holloway’s witty demeanour, it is he who is still giggling at the superb deal he agreed for the talented winger who perhaps was let out of Melwood too soon.

2 thoughts on “Tom Ince – The one that got away”