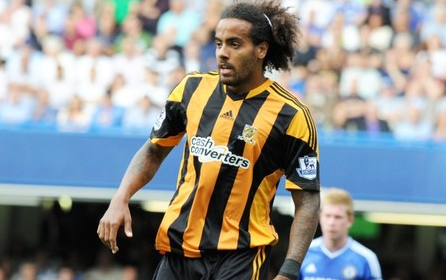 Ever since England secured their qualification for Brazil against Poland, and even more so since the World Cup draw last Friday, there has been endless speculation about who will make Roy Hodgson’s World Cup squad.

One of the more hare-brained theories in recent weeks has been the clamour to recall former captain John Terry. Admittedly the Chelsea skipper’s form has been very good this season but unsettling the Gary Cahill/Phil Jagielka partnership isn’t wise given we only have one game before the finals. Also it would be a huge comedown for Hodgson and there are a bunch of other issues that means it just isn’t going to happen.

One player who could be in the reckoning come May could be Hull’s Tom Huddlestone. Recently he’s attracted more attention for his hair (that he won’t cut off until he has scored) than his performances on the field but that is unfair. Huddlestone has always been a talented footballer, he demonstrated that often at Tottenham Hotspur but in recent years he gradually became more and more peripheral.

Over the summer then it was no surprise to see him move to Hull City and for what looked like a snip at £5 million. So far this season he has benefitted from having regular football week in and week out. At Hull City over the past few weeks he has become a pivotal fulcrum in a 3-5-2 formation. His presence allows the two other central midfielders – most recently against Swansea, David Meyler and Jake Livermore – to get forward at will, safe in the knowledge that Huddlestone would offer protection.

An example of why a player like this is vital can be demonstrated by what is going on at Manchester City. Unlike in previous seasons City now have two players in the middle of the park in the shape of Yaya Toure and Fernandinho they both love to get forward. They’d benefit from having someone protecting them, in a similar vein that Huddlestone does at Hull. Obviously City shouldn’t sign Huddlestone but the point is that he protects Hull’s backline and Hull’s other midfielders.

We all know Huddlestone’s strengths; he’s a fantastic technician with excellent ability for passing and long range shooting. Any talk of him returning for England though is virtually non-existent and that seems odd. In a World Cup squad of 23 the general assumption is that you take three goalkeepers, eight defenders, eight midfielders and four strikers. Given that in Danny Welbeck England seem to have a midfielder-come-striker so assuming he’ll make up a forward slot there are eight midfielder slots.

In an ideal world you’d take four wingers and four central midfielders. If the wingers are – to avoid getting into an argument – Theo Walcott, Andros Townsend, Aaron Lennon and James Milner. The Manchester City man is in for his versatility and the other three have the potential to destroy defences. Given that Steven Gerrard and Jack Wilshere are certainties that seems to be two places available. The players that would appear to be competing for these spots seem to be Tom Cleverley, Jordan Henderson, Frank Lampard, Michael Carrick, Ross Barkley and then Huddlestone.

Henderson has improved no end this season but for me Huddlestone would be a better bet than both he and Cleverley. Lampard’s experience could be key but at his age that can’t be enough. If he isn’t in good form he doesn’t deserve to go. In the same vein Barkley’s youthful exuberance can’t carry him, he needs to be in good form, which he is at the moment. Carrick is perhaps in the most danger, he’s injured currently and there will be immense pressure on him to save Manchester United’s midfield when he returns, if he fails it could affect his World Cup chances.

Where Huddlestone fits in is rather unclear. He isn’t a defensive midfield destroyer but he does have the capability to play the deep lying playmaker role. Sitting in front of the defence, breaking up attacks and then getting counter attacks going with accurate passes. He could be a useful option from the bench to shore up and protect a lead. On that basis it would look as if Carrick is his direct competition and although the United man was brilliant last season he has look jaded this year.

Huddlestone’s England chances will probably remain remote for now but if he keeps up his good form and Hull stay up he could come into Hodgson’s thoughts. It may sound odd but who the better player is can only play so big a part in World Cup selection. Form has to be considered and if Huddlestone’s is good then why shouldn’t he go, ahead of someone who is in terrible form?

Ultimately Huddlestone’s lack of recent England action will count against him and he probably won’t be called up but hopefully it isn’t for the wrong reasons.

One thought on “Tom Huddlestone for England?”