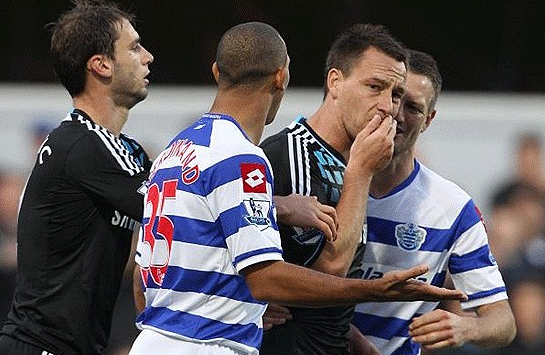 Last Wednesday, I saw Anton Ferdinand in Nandos.  And straight away I wondered how I could turn it into a story.

Okay, maybe not straight away.  First I said, “Oh my god, it’s Anton Ferdinand!” so loud he looked at me.  Then I tried not to stare.  And finally I got a bit excited when we were seated within gawking distance.

Then I wondered how I could turn it into a story.

My girlfriend didn’t know who he was.  So I told her he was Rio’s brother; that he played for QPR and used to play for Sunderland.  Before wondering out loud if he’d agree to an impromptu interview.

But it’s what I didn’t say that I want to write about.

Because in describing who he was, I didn’t even think to mention the one thing that non-football fans would know him for.

The time had passed and the story was over.

John Terry had been found innocent of racially abusing Ferdinand and, in football as in life, everyone had, apparently, moved on.

But this weekend, the man I sat almost-next to in a restaurant will again be the Premier League’s big story.  He’ll be the back page headline.  Because he’ll either shake Terry’s hand or he won’t.  And that will be what everyone’s talking about.

QPR and Chelsea are reportedly in talks over whether or not to maintain the ritual of the pre-match handshake.  In what will be the first match between the two since July’s trial, the clubs must decide whether everyone does it, or no one does.

In their previous two meetings, the handshakes have been abandoned.  Perhaps as a result of Luis Suarez agreeing and then refusing to shake Patrice Evra’s hand, or perhaps just because it was easier, not so much a diffusing as a refusal to light the fuse in the first place.

Either way, a decision has to be made yet again.  And it’s in everyone’s best interest to skip the ritual and get on with the match.

Shaking hands suggests respect.  It says: we want to beat you, but don’t take it personally.

But common sense says that two men previously on opposite sides of a court case shouldn’t face each other and pretend everything’s grand.

Were they to do it, it would be quick, a touch more than a shake, eyes averted, something to get over with.  What kind of message would that send? “We’ll do it.  But we don’t want to.”

But it’s likely both men will resist.  Or that their clubs will resist so they don’t have to.

This is after all a gesture the world will see.  And were they to shake, you sense that at least one man would be saying something they don’t believe.

We will wait for corners, when the two men will be in the same penalty area, looking focused, hardened, as if the other isn’t there.

And for a few days after we’ll talk about it, if they shook or if they didn’t, what happened when the final whistle blew.

And then we’ll forget again.  And hopefully next time someone sees Ferdinand away from his job and explains who he is, they’ll say he’s a footballer, and that will be enough.