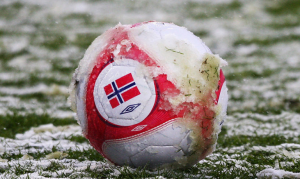 The battle between Rosenborg and Strømsgodset rages on at the top of the Tippeligaen table after both sides were victorious again this weekend. For Rosenborg, it was their fourth consecutive win, extending their unbeaten run in the league to 12 games, whilst Strømsgodset won for the second time after two defeats on the bounce to keep the pressure firmly on the league leaders.

Rosenborg’s win came at home to ninth-place Sogndal on Sunday afternoon, with goals in either half from Tore Reginiussen (a fantastic long-range shot after only seven minutes) and Nicki Bille Nielsen (the Danes’ second in as many weeks and his seventh of the season) giving the hosts a 2-0 win and condemning the visitors to their fifth consecutive game without victory.

As for Strømsgodset, they put four goals past struggling Sarpsborg 08 earlier in the day to win 4-2 at Sarpsborg Stadion. They were ahead after only three minutes through Simen Brenne, before Tom Erik Breive equalised for the hosts 30 minutes later from an indirect free kick after Strømsgodset goalkeeper Adam Larsen Kwarasey was adjudged to have handled a back-pass.

With the scores level heading towards the break, Adama Diomandé fired in to put the visitors 2-1 ahead with his sixth goal of the season on the stroke of half time. Sarpsborg 08 then equalised again 10 minutes into the second half through recently signed Nigerian striker Aaron Samuel, but the title chasers were back ahead just a minute later thanks to Jarl-André Storbæk, and young substitute Bismark Adjei-Boateng wrapped up the win with seven minutes of the game remaining.

The gap between second and third place is now seven points after Aalesund regained third spot thanks to a 5-2 thrashing of Hønefoss. Goals from Michael Barrantes, Jo Nymo Matland, Abderrazak Hamdallah, and Leke James gave them a 4-0 lead after only 35 minutes, and, despite two second half goals from Aleksander Solli, Hønefoss, who have only won once in their last 10 league games, were unable to initiate a comeback, and Peter Orry Larsen completed an emphatic win for Aalesund with a header from a Matland free kick deep into injury time.

Aalesund’s win knocks Viking down to fourth place after they drew for the fourth time in their last five games when they met Lillestrøm on Saturday. Viking had to fight hard for the point, too, after goals from Erling Knudtzon and Pálmi Pálmason put Lillestrøm ahead after 50 minutes, but Benjamin Sulimani (who has now scored two goals in his first two games for the club) and Patrik Ingelsten both scored within quarter-of-an-hour of one another soon after to rescue an important draw which keeps Viking just one point behind Aalesund.

At the other end of the table, the bottom four remains the same, with Start still occupying bottom spot after they were beaten 1-0 at home by eighth-place Odd, thanks to 20-year-old Fredrik Jensen’s first senior goal for the club 35 minutes into the game. With just one win in their last 14 league games, and only three wins all year, things aren’t looking positive for Start as we enter the final third of the season.

Hønefoss remain one point ahead of them in 15th place, whilst Sarpsborg 08 are a further point ahead of them in the relegation play-off spot in 14th, and Sandnes Ulf end the weekend two points in front of Sarpsborg 08 in 13th. Sandnes Ulf were brought back down to earth after three fantastic consecutive wins when they were beaten 3-1 by Haugesund on Sunday, despite going ahead after only three minutes through Fredrik Torsteinbø. Brazilian striker Daniel Bamberg equalised for Haugesund just four minutes later, and Dušan Cvetinović – recently signed from Swiss Challenge League side Vaduz – put them ahead on the half-hour mark with his first goal for the club.

Any chance of a Sandnes Ulf comeback was hindered when Fredrik Furebotn was shown a straight red card just before half time for a reckless challenge on Cvetinović, and Haugesund were able to take advantage of the one-man difference and wrap up the win with little under quarter-of-an-hour left to play when David Myrestam fired the ball past Sandnes Ulf goalkeeper Sean McDermott for his first goal of the season, and his first goal since he scored against Sandnes Ulf in September last year.

After losing for the first time since the middle of May last weekend, Molde moved back above Sandnes Ulf – as well as Tromsø – and into 11th place this week when they beat Brann 2-0 at home at Aker Stadion. Their task was made slightly easier when Macedonian defender Daniel Mojsov was sent off only 14 minutes into the game after receiving two yellow cards in just 10 minutes, and this allowed Jo Inge Berget to put the hosts 1-0 up 22 minutes later with a thumping effort from just inside the penalty area.

Despite Brann’s best efforts, Molde went 2-0 ahead and effectively killed off the game after 74 minutes when Fredrik Gulbrandsen fired the ball through the legs of Brann goalkeeper Piotr Leciejewski. The win means that Molde are now just one point behind Lillestrøm, and just two points behind Sogndal ahead of their clash next weekend, whilst the defeat leaves Brann five points ahead in sixth place and without a win in their last four league games.

Seventh-place Vålerenga, who now trail Brann by only one point, extended their unbeaten run in the league to six games when they drew 2-2 with Tromsø at Alfheim Stadion on Sunday. After going 2-0 up after only half-an-hour through Mohammed Fellah and Kristofer Hæstad, Vålerenga, who had won their last two league games before this weekend, really should have gone on to put the game to bed and wrap up three points that would have seen them overtake Brann and move as high as fifth place, but it wasn’t to be, as a valiant effort from Tromsø saw them rescue only their second point in their last five games, thanks to second-half goals from Remi Johansen and Morten Moldskred.

However, the draw means that Tromsø drop to 12th place after poor performances this season have seen them win only five times, with none of the five coming away from home. They face Sandnes Ulf away from home next Sunday – who sit two points behind them – and a win at Sandnes Idrettspark is vital if they are to avoid slipping any further towards the relegation zone.