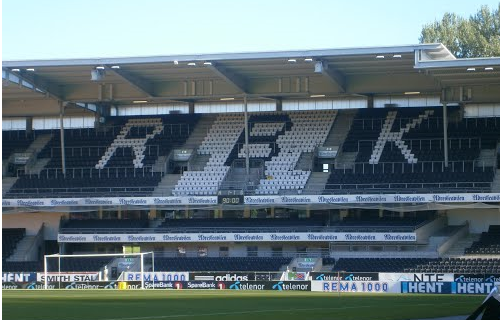 Strømsgodset’s lead at the top of the Tippeligaen table was reduced to just one point this weekend after they lost for only the third time this season, and the second time in just three games, when they were defeated 2-1 away from home by Haugesund on Saturday afternoon. A comical, and unfortunate, own-goal from Monuir Hamoud opened the scoring for the hosts, who before today had only won once in their last four league games, before Michael Haukås doubled their lead midway through the second half. 19-year-old substitute Martin Rønning scored his first Tippeligaen goal with an excellent long-range effort seven minutes before the end, but it would prove to be of little worth to Strømsgodset as Haugesund held on to claim all three points for themselves and move up to seventh place in the table.

Meanwhile, Rosenborg extended their unbeaten run in the league to nine games when they beat 14th place Lillestrøm 1-0 in front of 15,000 spectators in Trondheim on Sunday. The only goal of the game was scored by John Chibuike 19 minutes into the second half, and it was an incredibly lucky one, with the Nigerian’s tame effort bouncing awkwardly, yet slowly, past Lillestrøm goalkeeper Arnold Origi in one of the most bizarre goals of the season so far.

The three points gained by the second-place side means that not only are they just one point behind Strømsgodset at the midpoint of the season, but they are also now six points clear of third-place Aalesund, after they were held to a 2-2 draw by Sogndal on Friday evening. Leke James opened the scoring and put Aalesund ahead after 29 minutes with a well-controlled half volley from the edge of the penalty area, but Sogndal replied 11 minutes later through Malick Mane when the young Senegalese striker scored from the penalty spot after Sidimane Sagna was clumsily brought down inside the box. Aalesund were ahead again shortly after the break when Abderrazak Hamdallah’s cross-cum-shot was palmed into the back of the net at the near post by Sogndal goalkeeper Erik Dahlin, but, despite going down to ten men with 17 minutes left to play when Sagna was shown a second yellow card, Sogndal equalised once again and rescued a point for themselves when substitute Magnus Stamnestrø, on loan from Molde, scored with a thumping long-range effort with nine minutes left to play.

Aalesund remain equal on points with both fourth-place Brann and fifth-place Viking after both sides were also held to draws in their respective games. Brann picked up their first draw of the season – not to mention their first point away from home – when they drew 1-1 with Hønefoss (the 13th place side’s third draw in as many league games), whilst a last-minute goal from Vålerenga goalkeeper Gudmund Kongshavn deep into injury time secured them a vital point in their game against Viking. Veton Berisha opened the scoring for Viking shortly before the half-hour mark, and the scoreline stayed that way until Torgeir Børven equalised for Vålerenga three minutes into the second half with a wonderful side-footed flick from a Joachim Thomassen corner. Viking were ahead again only seven minutes later, however, when Patrik Ingelsten headed the visitors in from close range, but Vålerenga equalised in the most incredible fashion deep into injury time when Kongshavn came forward for a last-minute corner and rose high above the Viking defence to head in the all-important equaliser with only seconds remaining.

The draw means that Vålerenga drop one place to 10th, but sees them avoid dropping a further place after Molde won their second league game in a row (and their first away game of the season) to move up to 11th, just one point behind them. The reigning champions came from behind to beat eighth-place Tromsø 3-2 away from home on Sunday afternoon to move away from the relegation play-off spot in 14th place and go three points clear of Start in the relegation zone. Daniel Chima opened the scoring for Molde after only seven minutes, but two goals in four minutes from Magnus Andersen and Remi Johansen quarter-of-an-hour later put Tromsø ahead going into the half-time break. Daniel Chima started the Molde comeback shortly after the hour mark, however, and Mattias Moström scored what would prove to be the winner eight minutes later when he was able to pounce on Jo Inge Berget’s spilled shot and calmly tap the ball in on the line.

Molde move equal on points with Sarpsborg 08, but move ahead of them on goal difference, after the 12th-place side were defeated for the third time in their last five games, and their second time in as many weeks, at home to Odd. Veteran Frode Johnsen scored the game’s only goal six minutes into the second half, and the victory sees Odd move up to ninth place in the table, just one point behind Tromsø and equal on points with Vålerenga, and extends their impressive and important recent unbeaten run to four games.

Meanwhile, at the foot of the table, bottom side Sandnes Ulf moved to within one point of nearest rivals Start when they beat them 3-1 at home on Sunday afternoon. The hosts went behind after only 11 minutes through Espen Hoff, but a headed equaliser from Kenneth Sola 17 minutes later and two second-half goals from Tommy Høiland (which seemed to strike his hand rather than his head, as initially believed) and Sola, again, mean that Sandnes Ulf’s run of eight league games without a win is finally brought to an end ahead of two tough upcoming clashes against Strømsgodset and Aalesund.