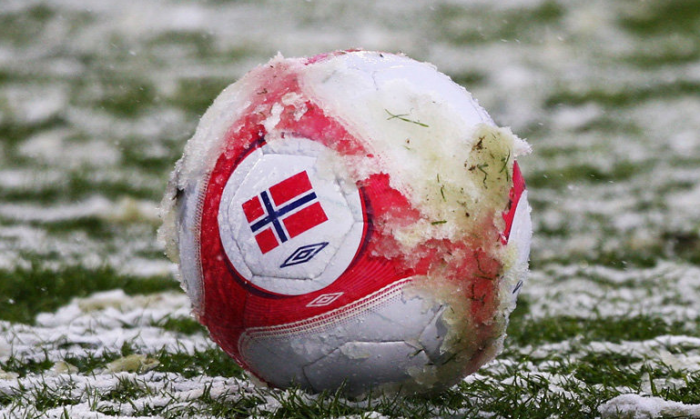 Despite only managing a draw, Round 8 of the 2012 Tippeligaen season saw Rosenborg climb to the top of the table, leading an ever-changing top six that’s seperated from top to bottom by only three points.

Stabæk’s misery continued when they hosted Molde on Saturday afternoon, the reigning champions firing five goals past them to move up to third, one point behind both Rosenborg and Strømgodset. The game was practically wrapped up after only nine minutes, Daniel Berg Hestad, Davy Angan and Joshua Gatt scoring one after the other, just three minutes separating each goal. The scoreline stayed that way at half time before Davy Angan got his second of the game after sixty-six minutes; substitute Jo Inge Berget then wrapping up a fantastic win for Molde when he scored their fifth with seven minutes left to go. Defensively all over the place, Stabæk could have easily conceded more. They travel to Vålerenga on Wednesday knowing full well that a similar performance will result in a similarly crushing defeat.

Tromsø overtook Vålerenga and moved up to fourth place in the table when they beat the away side 3-1 in snowy conditions on Saturday night. After chances for both sides, Zdenek Ondrášek scored his third goal of his first season as a Tromsø player to put the side 1-0 up after twenty nine minutes, Magnus Andersen then firing in after a defensive mix-up to make it 2-0 just two minutes later. Andersen then made it 3-0 nine minutes after the start of the second half, and Tromsø’s lead could have been furthered if it wasn’t for a strong performance under pressure from Vålerenga goalkeeper Lars Hirschfeld. With five minutes left to play, Mohammed Fellah came on for Marcus Pedersen and scored a consolation goal for the away side just a minute later, blasting in from the left hand side of the penalty area. But, it was too late, and Vålerenga move down to sixth place, two points behind Tromsø who are in fourth, equal on points with Molde.

The rest of Round 8’s games were played on Sunday afternoon and evening, the entire day seeing the ball hit the back of the net twenty one times. After disposing of their manager Tom Freddy Aune during the week, Fredrikstad dropped to fourteenth place when their ultra-defensive performance against Haugesund meant that the game ended goalless. Fredrikstad walked off the pitch at the end of the game with barely any attempts on goal, whilst Haugesund produced several chances to go ahead, Serbian striker Nikola Đurđić coming the closest for the away side but finding himself unable to beat Jon Knudsen in the Fredrikstad goal. After what has happened at the club this week, a point may be welcomed by many within, but it leaves them only two points clear of the relegation zone and without a win in six matches, their only win so far this season. Haugesund, on the other hand, drop from fourth to fifth, now equal on points with Vålerenga.

One the most impressive results of the round was arguably Sandnes Ulf’s 1-1 home draw against Rosenborg, a draw that sees the side stay in a well-earned eighth place, equal on points with Sogndal. After a first half that produced no goals, Sandnes Ulf went ahead went ahead first after sixty-seven minutes when Tommy Høiland was brought down in the penalty area by Rosenborg goalkeeper Daniel Örlund. Örlund saw yellow for his challenge and was unable to save the subsequent penalty, Aksel Skjølsvik sending the Swedish keeper the wrong way. But, fourteen minutes later, Rade Prica leveled the scoreline with his well-placed shot from the edge of the area. The striker suffered a disappointing end to the game, however, picking up his second yellow card in ten minutes after an ugly challenge from behind on Steinthór Thorsteinsson and unsporting words being uttered to the referee. Despite only managing to pick up a point, Rosenborg still find themselves at the top of the table at the end of Round 8 after Strømgodset’s disappointing defeat.

Strømgodset travelled to Aalesund in the hope of picking up three points that would see them go three points clear at the top of the table, but, despite going ahead after half an hour through Adama Diomandé, it wasn’t to be, one goal from Michael Barrantes and two from Lars Fuhre securing a much-needed win for Aalesund and sending them up to eleventh in the table. Barrantes got Aalesund’s first, a low fired strike from the left of the box beating Adam Kwarasey to make it 1-1 before Fuhre made it 2-1 just two minutes later. The score stayed the same until Fuhre got his second of the game after seventy-two minutes, the young Norwegian with a fantastic left-footed strike from just outside the penalty area that left Kwarasey with no chance whatsoever. The three points mean that Aalesund are now fully involved in the mid-table muddle that the league finds itself in, just six points separating leaders Rosenborg and twelfth place Hønefoss.

After an unbeaten start to the season, Hønefoss lost their second game in a row when they hosted Odd Grenland, the away side, who had suffered a disappointing start to the season, managing to put an impressive four goals past Hønefoss in a 4-1 win that sees them go unbeaten in four games. Former Kongsvinger striker Adem Güven scored his first league goal of the season after half an hour of play before getting his second just seven minutes later, scoring the first with his feet and the second with his head to give the away side a 2-0 lead going into the break. Snorre Krogsgård then made it 3-0 ten minutes after the restart with an unstoppable strike from the edge of the box. Hønefoss pulled one back twenty minutes later when substitute Kevin Beugre scored his first of the season for the club, but it was quickly cancelled out by Simen Brenne when he took perfect advantage of poor defending from the home side to make it 4-1, wrapping up a comfortable three points for Odd Grenland and sending the side up to ninth place with eleven points.

Similarly to Hønefoss, Sogndal’s impressive unbeaten run has come to an end, the side losing 3-0 against Strømgodset last week before losing 2-1 to Viking at the Fosshaugane Campus this Sunday. It only took Viking thirteen minutes to go ahead, Andrè Danielsen with an easy tap in right in front of goal after being set up by Valon Berisha to his left. Berisha came close to doubling the lead when he smashed the bar with considerable force, and Malick Mane put the ball into the back of the net for Sogndal just before the whistle blew for half time but, to Viking’s relief, he was judged to have been in an offside position. Indriði Sigurðsson got the winning goal for Viking with ten minutes left to play, heading in from close distance to make it 2-0, before ex-Helsingborg defender Hannu Patronen scored with his head at the other end for Sogndal, but, despite their best efforts, it was too late for them to find an equaliser, the final whistle going shortly after and signaling Sogndal’s third defeat in two weeks. The win takes Viking up to tenth place, with Sogndal slipping down to seventh, just one point now separating the two sides.

Round 8 was completed with a fantastic seven-goal thriller between Lillestrøm and Brann, the away side winning 4-3 to move above Fredrikstad to thirteenth place, whilst Lillestrøm stay in the relegation zone in fifteenth place, still without a win so far this season. Brann’s opener came after only nine minutes, Chukwuma Akabueze finding himself unmarked in front of goal and easily able to head in past a stationary Stefán Logi Magnússon in the middle of the Lillestrøm goal. He then doubled their lead just after the half hour mark, again finding himself in the right position at the right time in front of goal to tap the ball into the back of the net past Magnússon. Two goals in three minutes from Björn Sigurðarson at the end of the first half made the scoreline equal once again, the first coming from the penalty spot before the Icelandic striker was left completely unmarked at the back post and was able to place the ball underneath Brann goalkeeper Piotr Leciejewski to make it 2-2. It looked like the first half was going to end with an even scoreline, but Akabueze was on hand again to put the away side ahead once again, completing his hat-trick a minute before half time with a header in front of goal. After the restart, mass confusion ensued; Brann’s Erik Mjelde was required to kick the ball back to Lillestrøm keeper Magnússon after an incident involving Lillestrøm striker Fredrik Gulbrandsen, which Mjelde did, but the lofted ball back to Magnússon bounced over the keeper’s head and into the back of the net to make it 4-2. Mjelde apologized for the goal, insisting that he didn’t mean to score, but the referee had no choice but to let the goal stand. After discussing what to do, the Brann players, bar a visibly irate Leciejewski, decided to put fair play first and allowed Sigurðarson to run through the defence and place the ball in the back of the net to make it 4-3, despite Leciejewski attempting to save the Icelander’s shot, the Polish keeper adamant that it was a goalkeeping error that was the cause of Brann’s goal, not anything to do with Mjelde. The score stayed that way until the final whistle was blown, Brann holding on to secure only their second win of the season and moving three points clear of the relegation zone and Lillestrøm.

At the end of Round 8, Rosenborg and Strømgodset are tied on points at the top of the table with sixteen each, Rosenborg leading the way due to a superior goal difference. Molde and Tromsø are one point behind them in third and fourth, respectively, whilst Haugesund and Vålerenga are in fifth and six with thirteen points each. Seventh and eighth place Sogndal and Sandnes Ulf both have twelve points and ninth and tenth place Odd Grenland and Viking both have eleven. Aalesund and Hønefoss are in eleventh and twelfth with ten points and only Brann, Fredrikstad, Lillestrøm and Stabæk remain on single digits, Brann in thirteenth place now with seven points, Fredrikstad one point behind them in fourteenth with Lillestrøm and Stabæk in the relegation zone with only four points and one point, respectively.