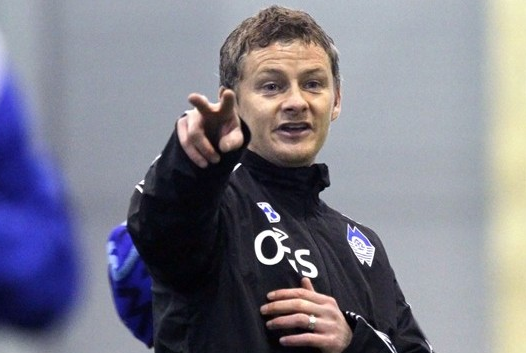 With just one game left to play, Ole Gunnar Solskjær has done it again. Molde have achieved what only four other Norwegian teams have been able to do and have claimed their second consecutive Tippeligaen title.

It took hard work, dedication and, above all else, consistency all season long from a strong side, but a comfortable 1-0 win at home to Hønefoss was the result that secured the league crown and allowed the Molde players to celebrate a fantastic achievement with friends and fans alike once the final whistle had finally blown. After a goalless first half boasting few real chances, two substitutions from Ole Gunnar Solskjær in the form of Daniel Chima Chukwu and Joshua Gatt made a considerable difference, Chukwu scoring his seventh, and arguably his most important, goal of the season shortly before the hour mark, the young Nigerian striker rising high to head in backwards from a Magnus Wolff Eikrem corner kick to send the home fans into rapturous celebration.

With Strømgodset drawing 1-1 away to Sandnes Ulf at the time of Chukwu’s opener and with Strømgodset boasting a better goal difference than the reigning champions, the Molde fans had to hold on with bated breath as they awaited the final result from Sandnes Idrettspark. Strømgodset pushed hard for all three points, both Stefan Johansen and Adama Diomande coming close to scoring, before Strømgodset’s title hopes were all but ended with an Avni Pepa header with fourteen minutes left to play, the twenty-three-year-old defender scoring his first goal for the club since his move from Start last year under the most tense and important circumstances; not just with regards to the race for the title, but also with regards to the race to avoid relegation. With Molde’s league title now confirmed, Round 30 of this year’s Tippeligaen season will be solely focused on who will and won’t be relegated…

After a somewhat mediocre season, Sandnes Ulf have now gone four games unbeaten, their last two being victories against the most unlikely of opponents in Tromsø and Strømgodset. Sunday’s victory against the once title-hopefuls has pushed them out of the relegation play-off place and into thirteenth, sending Sogndal, now one point behind them, down in their place after they missed the perfect opportunity to pick up important points in their bid to avoid relegation when they lost 2-1 away to Stabæk in only the third home win for the bottom-place side this season. Two goals in five minutes halfway through the first half from Franck Boli and Ville Jalasto were enough to secure all three points for Stabæk and give their fans something to at least try to smile about after a horribly disappointing season, with Ulrik Flo’s fifty-fifth minute goal not proving enough to kick-start a comeback for Sogndal. With a tough game next weekend away to Strømgodset who will be looking for at least a point to cement their second place finish, it’s going to be a tight end to the season for a Sogndal side that, despite a bright start to their campaign, have looked increasingly out-of-depth as the year’s gone on.

Sogndal’s defeat proved positive for Fredrikstad after they, like relegation rivals Sandnes Ulf, picked up their second win in a row after impressively beating third-place Rosenborg 1-0 in Trondheim. Nenad Srećković pushed his way through the Rosenborg defence before setting up Robert Stene to score the only goal of the game after thirty-one minutes, the striker’s third goal of the season leaving Rosenborg three points behind Strømgodset after three league defeats in a row with a trip to Stene’s former employers Hønefoss next weekend.

Lying three points behind Rosenborg in fourth place are Tromsø after they comfortably beat Brann 2-0 thanks to a brace from Czech striker Zdenĕk Ondrášek. Despite technically still having a chance to secure a third-place finish, Rosenborg’s ten goal lead over Tromsø in goal difference means that only a record-breaking victory at home to Odd Grenland next week would see them overtake their rivals from Trondheim. Per Mathias Høgmo’s side will be kicking themselves for not taking advantage of Rosenborg’s poor recent form, with his side unable to pick up a win in their previous three games before this weekend. Their midweek 5-1 thrashing away to Sandnes Ulf in particular was the game changer, midfielder Remi Johansen claiming that their performance was like “a girls’ under-fourteen side against Barcelona”. A victory there would have put them equal on points with Rosenborg going into the final weekend of the season. Instead, they look certain to finish in fourth place, two places worse than they managed last year.

As for Brann, their third defeat in a row means that they stay in sixth place, just one point ahead of both Haugesund and Vålerenga and four points behind Viking despite the latter’s 1-0 loss away to Haugesund. Tor Arne Andreassen’s eighty-fifth minute strike after poor defending from Viking was enough to secure Haugesund’s first victory since their narrow 1-0 win at home to Fredrikstad at the start of October. For Viking, the defeat means that their seven game unbeaten streak comes to an end, but a fifth-place finish is already guaranteed after a much more impressive campaign than in 2011 in which they only managed an eleventh-place finish. After mediocre finishes in the last few years, next season could be a hugely impressive one for the side from Stavanger.

Vålerenga’s defeat this weekend – their second in a row – meant that they dropped from seventh to eighth after two goals in either half saw Lillestrøm beat them 2-1 at Ullevaal Stadion. Erling Knudtzon put the visitors ahead just past the half-hour mark before Vålerenga found an equaliser two minutes into the second half when youngster Stian Ringstad accidentally kneed the ball into the back of his own net. Pálmi Rafn Pálmason put Lillestrøm back in the lead and wrapped up the win twenty minutes later though after impressive work down the right wing from the away side’s midfield set up the Icelander to fire in high and hard in front of goal. The win – Lillestrøm’s third in as many weeks – sees them climb to ninth place, eight points clear of the relegation zone that looked so dangerously close to swallowing them only a few weeks ago.

Odd Grenland too confirmed their place in next year’s Tippeligaen with a comfortable 3-0 win at home to Aalesund. Three first half goals from Simen Brenne, Morten Fevang and Frode Johnsen were enough to secure only their second league win in the last two months, with Odd now sitting in tenth place going into the final week of the season, five points clear of Sogndal. As for Aalesund, who sit one point behind Odd, results elsewhere mean that they too are just about safe for another season, but manager Kjetil Rekdal was candid in his frustration towards his players and their too-often mediocre performances this season, saying that if their current poor form continues, they’re going to obvious candidates for relegation next season. With Rekdal also clashing with his senior management recently, it will be interesting to see what happens to Aalesund during the winter off-period with the club, as Rekdal himself has said, desperately in need of change before the start of next season.