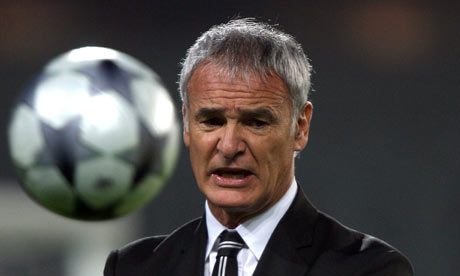 It takes some crisis to surpass Silvio Berlusconi in the Milanese embarrassment stakes. Newly published wiretaps on Sunday revealed that the Italian prime minister shed light on his sexual appetite (‘Last night I had a queue outside the door of the bedroom… There were 11 … I only did eight because I could not do it anymore,’), boasted to a TV showgirl that he was PM ‘in my spare time’ and once told ‘entrepreneur’ Gianpaolo Tarantini that he had to reduce the flow of women since he had a ‘terrible week’ ahead seeing Pope Benedict XVI, Gordon Brown, Nicolas Sarkozy and Angela Merkel.

As galling as it is for Italians to have an overgrown child leading their country, it’s especially maddening for AC supporters since Berlusconi is the owner of their club. Mercifully for the Rossoneri, Gian Piero Gasperini had already instigated his catastrophic tenure across the city at Inter until his sacking on Wednesday. He is the first ever manager to lose his job at the club without a single victory.

Three defeats, starting against AC in the Supercoppa in Beijing, an opening day 4-3 reverse at Palermo and a humiliating home defeat against Turkish outfit Trabzonspor in the Champions League, put the heat on. Saturday’s tedious draw at the San Siro against Roma was a stay of execution, before owner Massimo Moratti’s itchy finger pulled back the trigger following Tuesday’s disastrous defeat at newly-promoted Novara.

The Nerazurri have been rife with instability ever since José Mourinho ended the club’s two season hegemony with a Champions League win last year. During the defeat at Novara, one ultra brandished a shirt bearing Mourinho’s name with number one and ‘Il Dia’ (the God), his face contortedly pining like Tom for the eponymous object of his affection in (500) Days of Summer.

Inter have had three coaches in little over a year since Mourinho liked winning a European Cup final in Madrid so much he decided to stay there. Rafael Benítez was an insufficient replacement who, like Gasperini, tried to teach old dogs new tricks and was at loggerheads with the club’s hierarchy, while sandwiched in between was another inadequate appointment – Leonardo – hired after a woeful stint at AC.

Gasperini wasn’t aided by the entirety of Europe’s boot knowing that he was fourth choice (at best) for the post in the summer. André Villas-Boas, Fabio Capello and Marcelo Bielsa all rejected Moratti’s overtures and the Torinesi’s spell four-year spell at Genoa ended unconvincingly, with just 11 points yielded from the Rossoblu’s first 10 games last season before he was discharged in November.

Equally culpable then, yet out of the firing line, is prolific marksman Moratti. Since his ascension to the throne of owner in 1995, he has hired 13 full-time coaches at the club (Luciano Castellini was interim coach twice, Corrado Verdelli was caretaker in 2003) and fired all of them except Mourinho. Said aforementioned unlucky number was possibly cited as an excuse by Moratti to ammo up again in the mad world of Italian football, as he now turns to a Roman saviour to cease Inter’s regression.

One of the most itinerant coaches in football, Claudio Ranieri is better regarded in his native Italy than he is in England after his flawed yet (relatively) fruitful four years managing Chelsea. He experienced the opening season of the Roman Abramovich era, reaching the semi-final of the Champions League and securing an automatic slot for the following season’s competition via a second place finish behind the Arsenal ‘invincibles’. Alas he remains synonymous with the ‘Tinkerman’ image.

During his final season The Sun ran a competition for a pair of Chelsea match tickets if a reader could predict the first XI for an evening game. Of the thousands of entrants, not one was correct. Most memorably, his strategy in the semi-final first leg defeat away to Monaco (Scott Parker reverted to right-back, Jimmy Floyd Hasselbaink was a right-wing and Robert Huth went up front) was the unparalleled zenith of his tactical ineptitude, ultimately costing Chelsea an auspicious chance of Champions League success considering the other semi-final pair were Deportivo La Coruña and FC Porto.

His successes on his CV don’t possess the criteria Inter should demand of a new coach either. Just two major trophies (one Coppa Italia and one Copa del Rey) throughout a 24-year managerial career is unimpressive, and as likable as Ranieri is, it’s also patent that his managerial style borders on feebleness.

Inter’s unsteadiness also stems from the summer’s stultifying saga as to whether Wesley Sneijder would be leaving Milan for Manchester. A source at Holland’s training camp at Eindhoven prior to their recent qualifier against San Marino spoke to Sneijder and reported that he said ‘I’ll end up there (United) one day.’ Yet in spite of a January move seeming unlikely now that Sneijder is cup-tied in Europe, the pressure mounts on Ranieri to oversee a successful season in the remote possibility that he may keep the team’s talisman. There’s also the Dutchman’s brash ego to contend with (he belittled Holland’s goalkeeper Michel Vorm at last year’s World Cup about how much more money he earns than him).

Although five years on, there’s still an albatross around Inter’s neck regarding their recent success given how they benefited from the outcome of the 2006 match-fixing scandal. Juventus, then back-to-back Italian titleholders, were stripped of their titles and relegated to Serie B with Inter declared champions of both seasons. Yet their subsequent resurgence winning the Italian league outright came against no major opponent, with their city neighbours smarting from an ancient and fading group.

And Milan have now broken their 11-year title drought to capitalise on their rival’s uncertainty, and it’s now Inter’s turn to draw accusations of an archaic squad. The average age of their starting XI in Piedmont was 29, and Ranieri’s biggest challenge arguably is to reinvigorate his charges and phase out those who peaked during the 2009/10 treble-winning campaign. Ranieri’s not as old as some people think (he’s 59) and he has an impressive penchant for balancing the development of youth and making astute signings. His presence at Valencia allowed Gaizka Mendieta and Miguel Angel Angulo to breakthrough whilst he also bought Santiago Cañizares, and at Chelsea he nurtured the talents of Frank Lampard and John Terry in his final season and recruited Claude Makelele, Petr Čech and Arjen Robben.

Twice in his managerial career his actions have posed as a precursor for clubs to yield success in his aftermath. The challenge now is whether he can take full credit whilst remaining at Inter.

One thought on “Tinker’s failure warrants a colder eye”