The Premier League title race is already in full swing. While some believed Tottenham Hotspur would make some noise this season, those that may have placed a preseason wager on Spurs have already thrown those betting slips into the trash.

Tottenham have endured a shockingly rough start to the campaign, and they find themselves in the bottom-half of the table through 10 games. Needless to say, it would take quite the miracle for Mauricio Pochettino’s men to make their way back into the race at this point.

Instead, we have another compelling race between Liverpool and Manchester City. Liverpool have started the season almost perfectly, with nine wins and a draw under their belt through 10 matches. City, the two-time reigning league champions, haven’t been quite as pristine thus far. The Citizens have gone 7-1-2 through 10 weeks, which has them six points off the pace.

Liverpool’s hot start has resulted in the Reds overtaking their new rivals as the presumptive betting favourites to win the league. City began the year as the prohibitive favourite to win a third straight domestic title, but City have now dipped down compared to Liverpool’s odds at most Premier League betting sites.

As we saw last season, though, it’s still far too early to assume that Liverpool have the title in the bag. City were in a seven-point hole before earning a 2-1 win over Liverpool last January 3. That victory reduced the gap to four points, and Manchester City were ultimately able to overcome that and win their second domestic title in as many years.

City wound up winning the league by a single point over Liverpool, who are still in search of their first league title since the Premier League was formed in the early 1990s.

The early-season table has certainly played a role in Liverpool’s newfound status as odds-on favourites, but the fact that the Reds were able to hang with City for the duration of last season has oddsmakers believing this could be the year that we see Liverpool lift the trophy.

While it is still too early to call, I do think this is the year we see Liverpool finally get to the top of the mountain. Here are three reasons why Liverpool make for a smart betting option to win the league.

Jurgen Klopp is responsible for Liverpool’s remarkable turnaround. As much as one coach can be responsible for the exploits of an entire team, at least. The Reds have been on a steady climb since Klopp was appointed as Brendan Rodgers’ replacement in October of 2015. While the move has yet to translate into Premier League success for the club, Klopp has put them right on the doorstep.

Liverpool came close last season, but City ultimately had just enough tank in the gas to get across the finish line first. While Pep Guardiola is widely considered to be the best football coach on the planet, Klopp obviously isn’t far behind.

Guardiola has generally gotten the better of Klopp in their head-to-head clashes dating back to their days together in the Bundesliga, but Klopp’s high-pressing style has given Guardiola’s sides headaches since the two started to do battle on English soil.

Overtaking City won’t be easy. The argument can easily be made that the Manchester side are the most well-rounded team in Europe. That said, if any manager out there is capable of devising a plan to try and offset City’s strengths, it’s certainly Klopp.

Oddsmakers cannot fully account for the mental edge that Klopp’s Liverpool have enjoyed over Guardiola’s City over the past couple of seasons. Surely, the Reds’ demolition of the Sky Blues in the 2018 Champions League quarterfinals is a memory permanently etched in Guardiola’s mind.

While it may be tempting to place a bet on City with their new underdog status, the smart money at this point is behind Klopp’s side.

Liverpool’s aforementioned high-pressing style has been instrumental in the team’s success over the past couple of seasons. While winning the ball back high up the pitch is clearly part of the Reds’ strategy on a weekly basis, the team also applies nonstop pressure down both flanks. Trent Alexander-Arnold and Andy Robertson have become the most high-octane attacking full back duo on the planet.

The team’s 2-1 triumph over Spurs in matchweek 10 was a perfect display of how involved both players are in Liverpool’s relentless attack. Spurs took a 1-0 lead, but for the vast majority of the 90 minutes we saw Alexander-Arnold and Robertson flying up the wings and darting dangerous crosses into Tottenham’s box. Just look at the heatmaps from the match for Alexander-Arnold and Robertson compared to their counterparts, Danny Rose and Serge Aurier: 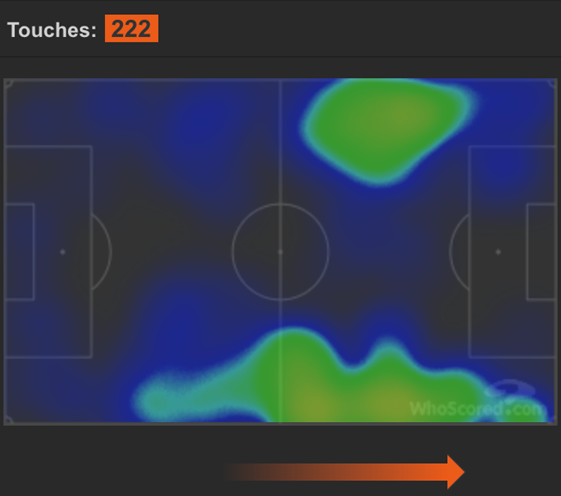 Alexander-Arnold and Robertson combined for 222 touches, most of which came in Tottenham’s half of the pitch. 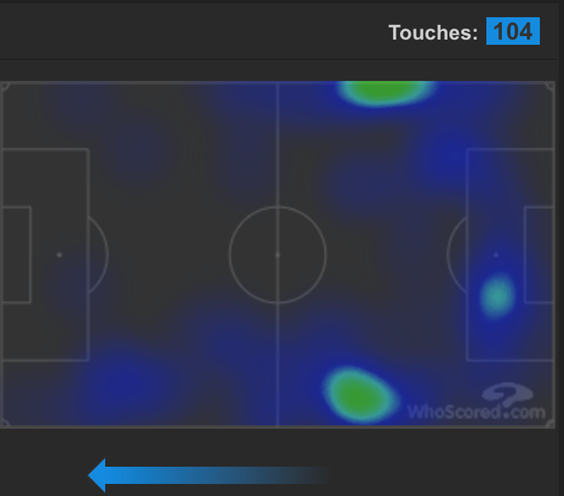 Aurier and Rose combined for over 100 fewer touches, most of which came in their own half of the pitch. No other team in England has full backs so willing to maraud down the wings and make things happen. Liverpool are incredibly unique with that style, and most clubs are not at all equipped to adequately defend against it.

Potential injuries are the only thing that can slow the Reds’ attack at this point. There’s a reason this team is a massive betting favourite in seemingly every Premier League match they play at this point. The expectation is that they will win. If they fall behind, it’s only a matter of time until they dig their way out.

Liverpool may not have as deep a squad as Manchester City, but you could argue that they do have more talent at the top. The attacking trio of Mohamed Salah, Roberto Firmino and Sadio Mane isn’t sneaking up on anybody. The 3 have become the most prolific attacking trio in Europe. Assuming all 3 are able to stay relatively fit for most of the season, Liverpool will have no issue scoring goals.

The difference between the Liverpool of today and the Liverpool of 2-3 years ago is the defence. The signings of Virgil Van Dijk and Alisson Becker have transformed the Reds from a leaky defence into one of the strongest in all of Europe. Alisson has missed most of the season due to injury, but the Brazilian No. 1 did recently return after his calf issue. With him back between the posts, the Reds are downright stingy defensively.

Liverpool used to be a good over/under bet every week because a leaky defence combined with a daunting attack led to plenty of high-scoring matches. They were never going to be serious title challengers until they fixed their issues at the back, though. Fortunately, those problems are not problems any longer.

The defence was huge in Liverpool’s 2-0 win over Spurs in last year’s Champions League Final. Tottenham were forced to chase the game after an early penalty decision gave the Reds the lead, but LFC’s back line refused to capitulate. Those are the kinds of games that Liverpool would have let slip away in years past.

The Reds have allowed eight goals to City’s nine in the league thus far. Last season, Liverpool allowed just 22 goals across 38 matches, which was one fewer than the Citizens yielded. City may well score more goals thanks to the depth of talent in the side, but the fact that Liverpool have solved what was their biggest issue for years is no small thing.

They are slowly coming around, but at this point most Premier League betting sites have not yet adjusted to the notion that this is the best Liverpool squad we have seen in nearly 30 years. A relentless attack, a sturdy defence and a world-class manager will have Liverpool on top of the English topflight at season’s end. Bet on the Reds while the odds are still somewhat favorable.