Jamie Carragher celebrates his 600th game for Liverpool down south at chilly Portsmouth, Arsenal host Hull at the Emirates and Chelsea clash with West Ham in the London derby in the final gameweek before Christmas. 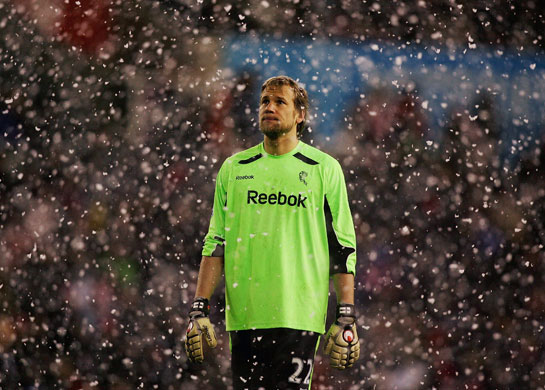 Defender Jamie Carragher is set for his 600th appearance for Liverpool against Portsmouth on Saturday, becoming only the ninth player to reach that milestone for the club. Fernando Torres may still be a game away from starting, with young forward David Ngog starting up front. Alberto Aquilani looks to another game starting from the bench. Portsmouth, who say snow on the south coast will not affect the match, could welcome back goalkeeper David James from illness while defender Younes Kaboul returns from suspension. Frederic Piquionne should fit despite limping out against Chelsea with cramp.

Manchester United are waiting on the fitness of Serbian defender Nemanja Vidic, recovering from a calf injury, ahead of their visit to Fulham on Saturday. United’s Dutch goalkeeper Edwin van der Sar will not be available to face his former club and has flown to the Netherlands to see the national team doctor about his knee injury. Alex Ferguson also said defenders John O’Shea and Jonny Evans and midfielder Owen Hargreaves are not expected back until “well into January”. Roy Hodgson’s side is likely to contain several changes from the side that beat Basle on Wednesday, with Damien Duff, Brede Hangeland and Clint Dempsey all returning to the starting eleven.

West Ham welcome back Matthew Upson from injury for their London derby against Chelsea on Sunday. The England defender has recovered from a hamstring problem and comes back into the heart of what has been a leaky Hammers rearguard this season. Forward Luis Jimenez also returns from a muscle strain but Carlton Cole (knee ligaments), Valon Behrami, Zavon Hines (both knee) and Kieron Dyer (hamstring) are still out. Mark Noble is available after suspension. Didier Drogba is fit again and set to return to the Chelsea line-up, while Ricardo Carvalho is expected to replace Alex in defence to make his 200th appearance for the Blues.

Arsenal will be without captain Cesc Fabregas (hamstring) for their match against Hull City at the Emirates Stadium on Saturday. Brazilian midfielder Denilson has recovered from a back injury that kept him out during the week, though Arsene Wenger is still without Tomas Rosicky, Robin van Persie and Nicklas Bendter as well as Gael Clichy. Hull meanwhile have no fresh injury worries ahead of the game. Midfield dalisman Jimmy Bullard is set to return at the end of the January.