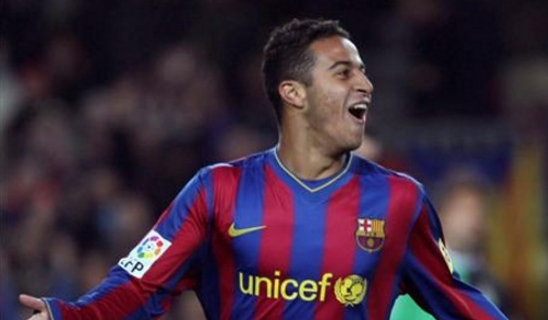 The buzz in the football world pre and post U-21 European Championships is that of an FC Barcelona midfielder Thiago Alcântara do Nascimento. Like many youngsters nowadays, he is already compared to a footballing great and his compatriot from Barca and Spain, Xavi.

His stock has risen dramatically since the Euros after his scintillating performance, with the the likes of Arsenal and Chelsea in hot pursuit.With his signature on the dotted line tying him up to Barca till 2015 with a €90 million release clause, its safe to say that all the transfer speculation surrounding him has been laid to rest at least for the next couple of years. With the whole transfer speculation behind him, he can concentrate on the field to become a footballing great he wishes to become. The million dollar question is, who does he want to emulate to become a footballing great? Xavi?

There is no question that Xavi is one of best footballers of the last decade if not the best. With the illustrious company of Messi, Ronaldo, Ronaldinhio and Zidane to name a few, there is no straight answer to who the best is/was. What made Xavi to be considered in the list is not the individual brilliance as shown by the above mentioned names but how much his teams, Barca and Spain, depended on him for every single trophy they won in the last few years. In essence the two Champions League, the numerous League titles, the European trophy and the World Cup was in large part due to Xavi’s contribution. Any midfielder not wanting to emulate Xavi or achieve the amount of success he has achieved has to be crazy.

So is Thiago truly the next Xavi ? He has the passing ability that Xavi possesses. He can dictate the pace of any game as seen in his Barca B and Euro games, another of Xavi’s traits. He can find the final killer pass to an onrushing forward just like Xavi does. But in some sense he is more than Xavi. He has a flair about his game typical of his Brazilian heritage. He has the ability to score spectacular goals from 30 yards out and he can dribble the ball through a maze within a blink of an eye. These are envious traits that Xavi would love to have. For as good as a footballer Xavi is, the one thing that sets him apart from his illustrious company of best footballers of the last decade is his style or lack of it. He does not provide that one piece of showmanship that the other footballers provide. He cannot dribble the ball through a bunch of defenders, he prefers to pass the ball through them. He cannot do step overs to confuse his opponents, he can pass the ball through their legs if needed. He does not turn and spin with the ball, he walks with the ball waiting for perfect moment to thread the ball into a strikers path. But Thiago can do all of those and score goals too. Thiago scored three goals from the 17 appearances he made in the 2010/2011 season. He was not even a starter in most of those games. Compare that to the five goals Xavi scored in his 50 appearances and you see a distinction cropping up.

In many ways Thiago is more of an Iniesta than Xavi. In the absence of Xavi, Iniesta has done wonderfully filling in Xavi’s shoes. When Xavi is present though, Iniesta’s role is much different. He likes to sit much higher than Xavi. He provides many assists as well as goals, a skill that he recently added to his arsenal. He provided 15 assists compared to the 16 of Xavi while outscoring his Spanish compatriot nine to five on the goal front. Iniesta is much more dynamic compared to Xavi. He likes to take on defenders and dribble, can play both wide and central midfield as well as wide forward and in his days with Frank Rijkaard, he even tried his hand at being a defensive midfielder with varying degree of success. Thiago has all the qualities to emulate Iniesta and surpass him in the scoring department too. Thiago has oodles of confidence and can only get better as he matures. He can be the perfect backup for Iniesta with Fabregas being Xavi’s deputy. This would give Barca four options of class and flair in the midfield with Sergio Busquets and Javier Mascherano giving the teeth to the midfield.

With the amount of talent that Barca possess and their philosophy of the beautiful game, there are many more years of dominance in store in La Liga and Champions League. Watch out Madrid, you need a lot more than Mourinho to conquer the footballing world with this Barca.

6 thoughts on “Thiago Alcantara – The next Xavi ?”