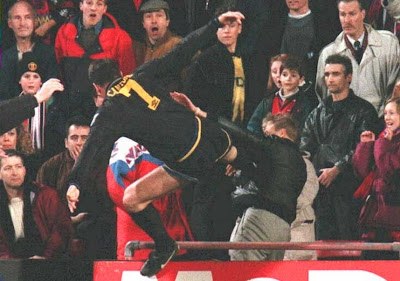 Time for our weekly trawl through the history books, as we look at some memorable debuts, comebacks and farewells and one of the worst dives football has ever seen.

After a summer nursing his metatarsal following his breakthrough performances in the European Championships, Wayne Rooney made his Manchester United debut today in 2004. The £27m man had a dream start for United, bagging a hat-trick in their 6-2 win over Fenerbache in the Champions League. Another of the Premier League’s biggest names was being unvielded to today in 1996, as Arsene Wenger was appointed Arsenal manager.

During the early 2000s AC Milan were one of Europe’s top teams, picking up all manner of domestic and European trophies and two of the men at the centre of their success both share a birthday today. Silvio Berluconi has more title than you can shake a stick at – AC owner, media mogul, president of Italy, comedian – and was born today in 1936. His former star player Andrei Shevchenko is also celebrating today, as he turns 33. Manchester United were responsible for one of the Premier League’s greatest ever comebacks, as they gave Spurs a 3-0 half-time headstart, but downed their London rivals 5-3 after a blistering second-half display.

More shenanigans at Old Trafford, as Manchester United became the first football club to start their own television channel as MUTV broadcast for the first time today in 1998. For a club-run propaganda machine it’s seen it’s fair share of controversy, mainly the Roy Keane outburst in November 2005 that led to the Irishman’s United departure. Peter Taylor’s managerial career continued it’s downward spiral when he was sacked by Leicester City today in 2001. His tenure is most famously remembered for the £5.5m he blew on flop Ade Akinbiyi.

Mercurial Frenchman Eric Cantona was back on the pitch today in 1995, following his nine-month ban for unleashing the best kung-fu kick this side of Fists of Fury in United’s clash with Crystal Palace earlier that year. A quiet comeback game for Cantona? No chance. United played host to Liverpool and after a minute Eric had created a goal and would later score the winner from the penalty spot. As Cantona returned, Pele was ducking out today in 1977 as he played his last ever game. The Brazilian played one half for Santos and the other for the New York Cosmos as the only two teams he ever turned out for took each other on.

It’s many happy returns to Sir Trevor Brooking as one of England’s greatest ever players and now one of the most respected wise heads turns 61. The stars of the future were strutting their stuff today in 2005, as Mexico and Brazil contested the Under-17 World Cup final in Peru. Mexico shocked the Selecao 3-0, with Carlos Vela bagging the first, causing the Arsene Wenger scouting network to spring into action and snap him up. The player of the tournament was Brazil’s Anderson who Manchester United have since splashed £17m on.

Another big birthday today, as YouTube star and big-game bottler Zlatan Ibrahimovich turns 28. One of the more amusing dives of recent times took place today in 2007 when AC Milan’s Dida hit the deck after a Celtic fan came on the pitch and gave him what Charlie Nicholas in the Sky Sports studio described as a ‘little tickle’. Uefa weren’t impressed by Dida’s histrionics and slapped him with a two-match ban and £25,000 fine.

Peter Taylor (the original, not the aforementioned Akinbiyi fan), perhaps football’s greatest ever number two, passed away today in 1990. Ever since the pair hooked up at Hartlepools in the 1960s, they enjoyed a successful partnership at the likes of Derby and Nottingham Forest. Clough said of him: “I’m not equipped to manage successfully without Peter Taylor. I am the shop window and he is the goods.” After a couple of years off the radar, the world was reminded that Tomas Rosicky still existed when he netted against Manchester City a couple of weeks ago and today he turns 29, so happy birthday to the man known as the Little Mozart.