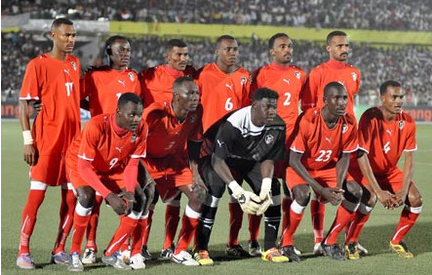 This East African country has suffered through so much ever since its independence from Britain in 1956. From two civil wars due to religious persecution, differences involving a person’s language, ethnicity and of course political power caused the death of millions and the displacement of millions more. This country has been accused of being a haven for terrorists leading to years of international sanctions imposed against them and its people, as well as suffering through one of the worst humanitarian crises of recent times in Darfur. The country that I’m talking about is Africa’s now third largest nation, Sudan.

Despite the country’s long-time struggles and issues, sports and particularly football has always helped in uniting its people and diverting attention away from the problems and issues they’ve long been facing.

Sudan first formed its football federation in 1936 and joined FIFA, 12 years later in 1948 and CAF (Confederation of African Football) in 1957. The country had a very good period of success from the late 1950s to the early 70s, hosting the first ever African Cup of Nations in 1957 and getting third place in the tournament, in which only four countries participated. Sudan gained the runners-up positions in 1959 and 1967, and won the tournament in 1970 which is their only win in the tournament to date.

Despite this early period of success, Sudan’s national side haven’t much since and have never qualified to the World Cup and have also struggled to qualify to the African Cup Of Nations over the years. The national team, however, managed to qualify for next year’s tournament and they did achieve qualification to the 2008 edition which shows that there are signs of a resurrection. Sudan is ranked 102 by FIFA and placed at number 26 amongst African nations. But it hasn’t been the national side which gains the most attention and has had the best of successes; club football is what has brought the most success and attention to the sport, particularly two clubs; Al Hilal and Al Merrikh.

Al Hilal and Al Merrikh are arguably Sudan’s best ever and most dominant clubs, and their rivalry is amongst the fiercest in the continent. Proof of their complete dominance of club football in the country is the fact that the domestic league has been won by either club for the past 19 years!

Both of these teams benefit from being backed by two of Sudan’s richest men and have this helped the two clubs in acquiring the nation’s best and most talented players. Players like Al Hilal and Sudan’s national team captain, Haitham Mustafa, who holds the record for most appearances in the Sudanese league and with the country’s national side, and for Al Hilal as well. Faisal Agab, who captains Al Merrikh and holds the all time scoring record in the Sudanese league and is the leading Sudanese scorer in all African championships. Haytham Tambal, who has played for Al Hilal and now playing for Al Merrikh, is the all time Sudanese international top scorer.

As you can see, most of Sudan’s best players prefer to ply their trade in Sudan rather than aspire to move abroad. There are a few exceptions with some players plying their trade in the Gulf region and in bordering African nations, but the majority play domestically. This social mindset comes from the comfortable living conditions in the country. This is because since the early 2000s, Sudan has arguably been the most rapidly developing country in Africa and with this huge economic growth (in 2005/2006 Sudan was the 17th fastest growing country in the world), the financial rewards players receive have increased to the point where there is no real incentive for them to leave their families and move abroad.

This poses the question: is this insular attitude holding back Sudanese football? If players have the drive and motivation to excel at football, to go and challenge themselves in more competitive leagues and in a broader context, that can help improve the tactical and technical capacity of the Sudanese game?

This is just one of the reasons why the country’s national side has struggled for success over the years, despite the success of their two top clubs in African club competitions, especially Al Hilal, who have reached the semi final in the CAF Champions League this year.

Other problems that Sudanese football is facing is of course the huge lack of competition in the league with only two clubs contesting for the title, and winning it for the past 19 years without much competition. This lack of competitiveness as well as playing field, will continue to hold back Sudanese football and could even regress the popularity of the national league, if the imbalance is not addressed.

There is also friction between the Sudan Football Association and the government that still exists after last year’s football elections, which led to the controversial ousting of long time SFA president, Kamal Shaddad. Sudan’s Premier League and Football Association still rely heavily on government support, so this is a critical issue which must be addressed and if it continues, the SFA need to start using alternative revenue streams like continuing their broadcasting rights with Super Sport, etc. This is not only to help the league grow, but to survive as well.

Another issue which is a concern is the failure of Sudan’s Under 17 and 19 sides from getting past the first round of the CAF qualifiers in their respective tournaments. This is a concern as top players like Haitham Mustafa and Faisal Agab are past their 30s and so the team is in need of young, bright prospects to fill in their shoes and lead the side for the next decade and beyond.

The biggest issue, though, is the separation of the country and the independence of a new country named, South Sudan, which was made official on July 9, 2011. South Sudan have already formed their own football association in Juba (the S.S.F.A), and have held two formal internationals with their newly formed national sides, against Tusker of Kenya and SC Villa from Uganda. Despite losing both games, the South Sudanese didn’t mind and kept on celebrating and cheering, showing the optimism and how upbeat they are over their future and the future of this new country.

Of course, South Sudan is still a baby nation and will have to start things from scratch. The country lacks pitches, has no major football clubs, no league and only has a few student teams that are sponsored by local businesses.

Around 80% of Sudan’s oil revenues is located in South Sudan, and that’s likely to be the country’s main source of revenue and which will be used for the country’s infrastructure, build pitches, clubs, form a league, etc. and of course to help its people and to build the country’s future. It will be interesting to see how the effect in reduced oil revenue for North Sudan will have on the future of the Sudanese Premier League and the growth of Sudanese football.

A player to look out for with South Sudan’s national side is James Joseph Moga, who currently plays as a forward in India with Sporting Club de Goa and has had stints in the Gulf, particularly in the UAE and Oman. Moga became South Sudan’s first international goal scorer with his goal in the country’s first ever formal match against Kenya’s Tusker.

South Sudan has already made strides in improving the football infrastructure by renovating the main stadium in Juba which has a seating capacity of 1,600 and sealing CAF membership which will be made official by February 2012. They also have applied for FIFA membership which is expected to be sealed as well.

The country still faces problems though, especially politically with North Sudan. North Sudan are insistent on a 50/50 share in oil revenue and this could lead to hostilities and conflict especially in the border regions of Abyei and South Kordofan. President Omar Al-Bashir has also forced clubs in North Sudan to release their South Sudanese players, players like Atir Thomas Magor and Goma Genaro have been released from their contracts and this could be a major issue as north and south Sudanese players have formed friendships with each other and this new rule where South Sudanese living in the north will lose their jobs, could create separation and enemies amongst themselves, and that will definitely affect Sudanese football.

In my opinion, the separation could be for the better of Sudan, especially South Sudan whose people are excited and very hopeful for the future and to build a nation that the world will admire. How this separation will affect Sudanese football, no one knows. What I know is that interesting times are ahead and I’m looking forward to watching how the national side will perform in the Cup of Nations.

I wish the people and the nation all the best of luck and happiness, and I hope that football can play a part in bringing joy and unity for both countries.

Special thanks to Tom Legg, who took the time to help me with this article. He’s a must follow for all things African football. Twitter: @tomlegg