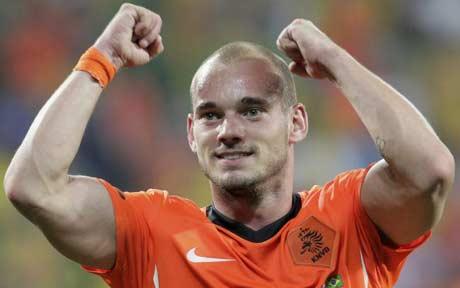 Ever since Inter Milan’s Dutch magician announced on his personal twitter account only hours before the 2011 summer transfer window slammed shut that he was staying at the Nerazzuri for another season, speculation over the future of Wesley Sneijder seemed to fade. Over the course of the summer he was heavily linked with a move to Manchester United mainly due to Paul Scholes announcing his retirement with immediate effect after the 2011 Champions League final.

Sneijder seemed to fit the bill in terms of ability. The Dutch playmaker was named the 2010 UEFA midfielder of the year after helping Inter Milan win their third European Cup. His style of play in the heart of midfield is somewhat similar to Scholes. His vision, passing range and eye for goal mirrored what Scholes had brought to United over so many years to a certain extent.

As United were continually being linked with Sneijder’s services throughout July and August 2011, it only seemed a matter of time before the Dutchman swapped Milan for Manchester. When asked about joining United during the summer Sneijder responded with “We will see”.

Sir Alex stated in a few interviews he was happy with his squad and the players he had brought in (Phil Jones, Ashley Young, David De Gea) and had no real interest in pursuing Sneijder despite what the tabloids had been printing. Some people suggested it was Sneijder’s high wage demands that put United off whereas others thought the Dutchman’s age and injury record played a part in the transfer that never happened. As we’ve seen with United’s latest marquee signing in Robin van Persie, age sometimes isn’t that vital when buying the “finished article”

Sneijder’s future has once again been thrown up into the air after club director Marco Branca has stated he would not be involved in the clubs plans unless he agrees a drop in his large wage packet. Sneijder is reportedly on £200,000 a week at the San Siro and is the clubs highest earner.

Inter president Massimo Moratti also confirmed that Sneijder wasn’t playing due to him being unsettled.

“Sneijder isn’t playing because the coach doesn’t think he’s at his best, above all psychologically”

If Sneijder was to be looking for an exit come January, would United still show an interest? The acquisition of Shinji Kagawa this summer from Bundesliga champions Borussia Dortmund has somewhat added more flair and creativity to United from an attacking point of view. However United do seem to be light in that central midfield area. A more dominant defensive minded, midfield destroyer has been on United fans wish list for sometime now, someone reminiscent to Roy Keane and Bryan Robson at their peaks for the club. Sneijder is certainly not that type of player but he is proven at the highest level and would definitely add more strength in depth in United’s heart of midfield.

Other possible destinations for the Dutchman include United’s neighbours and Premier League champions Manchester City who have reportedly shown an interest. Anzhi Makhachkala and Bundesliga side FC Schalke have also been linked.

At 28 years of age Sneijder is now in the peak of his career and as we’ve seen with Andrea Pirlo at Juventus and to a certain degree Paul Scholes’s return from retirement to Manchester United, experience can be crucial when operating in the heart of midfield.

2 thoughts on “The Sneijder saga, revisited”