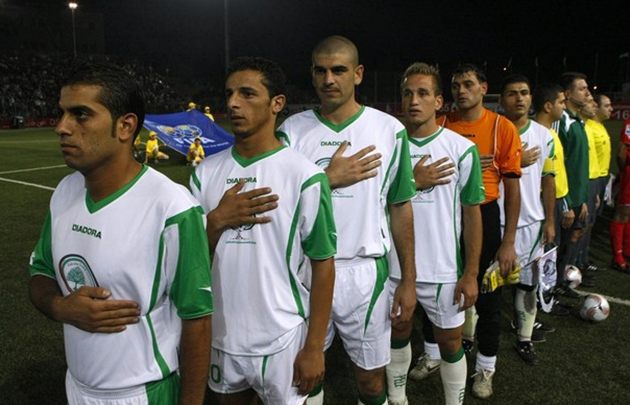 Football tends to have a common habit of bringing hope and joy to those in countries struggling with violence, terrorism and poverty.

It is very difficult talking about the state of Palestine without any reference to their recent history, which will undoubtedly plague the nation for years to come. With Palestinian and Israeli missile exchanges intermittent and the threat of death being a daily risk, football is gradually lending hope to much of the Palestinian population and attempting to slowly restore peace in the war-infected state.

In early July, Palestine played their first ever FIFA World Cup qualifying match on home soil, making history that spread a huge smile on the faces of every football fan in the country. They drew 1-1 with Afghanistan and thus took their first steps towards the 2014 FIFA World Cup in Brazil, winning the tie 3-1 on aggregate. This result sparked wild celebrations amongst the Palestine fans, who for the first time could witness and rejoice in their side competing in such a momentous tournament. Threats of violence have diverted matches from taking part in the beleaguered state for some time, but the match against Afghanistan marked a huge step forward in the future of Palestinian football.

Palestinian football experiences unique challenges that would seem barbaric to many populations. Following the victory against Afghanistan, Palestine were drawn against Thailand in the next round. Unfortunately they lost the first leg away from home 1-0 but were full of optimism coming into the second leg on home soil. That optimism was shattered when three members of the national squad were refused permission by Israeli officials to enter the West Bank and therefore partake in the match. This is a problem that has troubled Palestinian football for some time and looks likely to continue in years to come. Eventually Palestine proudly drew the match 2-2 but left the game feeling crushed as they were beaten on aggregate by a last minute Thailand equaliser.

Their first ever competitive match, a 2012 Olympics qualifying match was also marred with the same difficulties as eight players were refused permission to travel out of the Gaza strip for the match. This game was also against Thailand and ended up in a 6-5 penalty win for the away side. A proud 27,000 fans showed up at the stadium for this game, 17,000 of which entered the stadium whilst the remaining 10,000 partied outside the stadium for the duration of the match. Significantly, reporters and journalists commented on the large proportion of young citizens at the game dressing up extravagantly in the colours of the national flag and said how this was a considerable sign that the popularity of the sport was ever-growing in the nation.

This security issue is only one of many problems that make opportunities for young people in Palestine increasingly difficult. Health and education levels are severely low as the World Health Organisation suggests that over 70% of 9-month-old children in Palestine suffer from anaemia, a disease which is provoked by a lack of iron in the diet and causes severe weakness.

Not one member of the current squad is under 21 years old. This fact suggests that if Palestinian football wants to accelerate its elevation, more youth development is needed to aid their world reputation in the sport. Sporting initiatives led by humanitarian organisations such as The Peace Dream Foundation (PDF) are becoming vital to young persons in Palestine and similarly troubled countries. In 2004, a tournament of 16 teams was held in Gaza which represented most of the political and social factions within the Gaza strip. It was welcomed as a huge success and was celebrated as an ideal way for youth players to develop their own footballing ability as well as learning valuable life skills in which they can aspire to improve their quality of life. Other world charities use football as a way to develop relationships and promote peace in countries like Palestine. Many schools and teachers in the state rely on international organisations like these to develop their skills that they can pass onto the children of tomorrow through education and sport.

As ways to develop football amongst youth players in Palestine are emerging every day, so are the setbacks that are inevitable with the promotion of sport in such a poor nation. In 2009, the English Government refused to grant visas for the Palestine Under 19s football team to travel to the country where they would have played Chester City, Blackburn Rovers and Tranmere Rovers, as well as take part in a special training camp, during a three-week tour. The decision was met with shock from Palestinians as the English Government even considered funding the tour earlier in the year as part of the ‘Engagement with Islam’ programme.

Tours such as this are perfect examples of disparate cultural groups working together to use the energy and camaraderie of football to positively introduce different cultures to each others. The search for excellence gives children a reason for living and works to get children away from guns and violence when they have nothing to do.

Cultural factors also pose difficulty in the promotion of football within Palestine. Historically, Turkish and Eastern pastimes take priority over more modern sports in Palestine. Wrestling, archery and chess are hugely popular in the country but lack any international identity that will improve the sporting reputation of the country. Until recently, interest in football within the country has been few and far between. There has never been a genuine mainstream interest in the sport and therefore the seeds in which to grow some sort of football scene have never really been available for young people to take advantage of. With FIFA World Cup qualifiers coming to Palestine only being the start, Palestinians have every reason to be optimistic when it comes to football within their country. Proving they were a safe environment to host football matches is only the start of their development within the world game. Obviously, political and social problems make it difficult for any rapid expansion, but hopefully charities and other countries can encourage current players and upcoming youth stars to believe they can achieve anything, and subsequently help the current situation in the country in order for them to do so.