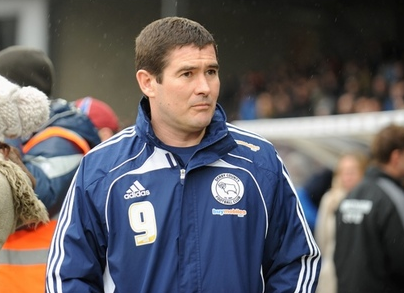 There is a statue. Twenty-foot high and immaculately finished in glistening bronze, it faces north-west and overlooks the city of Derby. This statue provides a fitting tribute to two men who brought an exciting and successful brand of football to the city many decades ago.

In the six years they spent managing Derby County football club during the late-60s and early-70s, Brian Clough and Peter Taylor turned the second division strugglers into champions of England and brought European football to the Baseball Ground for the first time. Combining a successful passing system with a shrewd transfer policy Clough and Taylor took the provincial East Midlands club to the semi-finals of the European Cup, turning over the likes of Benfica as they did. Clough and Taylor resigned in October 1973 following several well-publicised fallouts with the board and, although the club won one more league title in 1975 under Dave Mackay, the club would never see the same success again.

Clough and Taylor’s legacy at Derby has been immortalised in numerous books, a well-acclaimed film and now that beautiful monument outside Pride Park Stadium. There will be very few football fans across the country unaware of the duo’s exploits in the East Midlands, from winning the Division One Championship with Derby to becoming two-time European Cup winners with Nottingham Forest.

Since Clough and Taylor’s acrimonious departure Derby County fans have seen their beloved club enter a prolonged period of mediocrity and decline. No longer the force they were in the early-70s, the last forty years have been largely unsuccessful and unexceptional and at present, the Rams ply their trade once again in the second tier of English football.

The only tenuous link to remind supporters of those glory days is the current manager in charge at Pride Park, the new Clough at the helm of Derby County football club. Nigel, son of Brian, left his long-time position at then-Conference side Burton Albion in January 2009 to take control of the club where his father first made his name.

The game has changed dramatically since the 1970s and as such the “second coming of Clough” has not quite materialised as the first did. Whilst his father would win promotion to the top-flight in his second season, Nigel’s primary objective has been to keep the club in the Championship under severe financial restraints.

Three years on and Clough would appear to have fulfilled his brief. Derby remain in the Championship and are operating on a much sounder financial footing. Clough has brought a great deal of stability to a club that has needed just that for the last decade and The Rams look to be in good shape for the Financial Fair Play regulations set to affect the Football League from the 2012/2013 season.

Clough’s first mission upon taking charge of Derby was to help cut the club’s debt of £30million and slash the spiralling wage bill, which then stood at a ludicrous £16million per annum. Players like Claude Davis, Andy Todd and Roy Carroll were just three of several players earning a great deal more than their performances on the pitch warranted. None of them lasted longer than the summer under Clough. In three years, Clough cut the club’s wage bill by a staggering 40% and is continuing to do so in 2012.

Such financial prudence on Clough’s part has been coupled with an often frustrating lack of appropriate investment from the club’s board, headed up by American management firm General Sports and Entertainment. GSE’s insistence on running a sustainable business model has often seen Clough unable to acquire some of the targets he believes are needed to sustain an attack on the playoffs. Quality strikers like Billy Sharp and Gary Hooper have been linked with the club but the lack of a decent transfer kitty has meant that no such players have even had chance to consider joining the club (could you imagine Brian Clough’s reaction to being told he wasn’t being given £2million to sign Billy Sharp?).

When Clough the younger has had money to spend he has spent it well. Former Blackpool defender Shaun Barker has proven to be a steal at £1million. Goalkeeper Frank Fielding has quickly repaid his £400,000 fee with a string of first-class saves and performances, being rewarded with a call-up to the full England squad. John Brayford and James Bailey were signed in a joint-deal from Crewe Alexandra for around £800,000 and each won “Player of the Year” awards in their first season at the club.

Clough has also invested a great deal of time and money into the club’s academy and is now reaping the rewards with academy products Mark O’Brien, Jeff Hendrick and Callum Ball currently first-team regulars. 15-year-old striker Mason Bennett made his first-team debut in October and is predicted to have a bright future in the game, as is England Under-17 international Will Hughes.

Like his father, Clough prefers to play a passing game with each player playing to his individual strengths and when on song, Derby’s pass-and-move play is a joy to watch. However, at times you don’t quite know which Derby County will turn up, such as when The Rams turned in a top-drawer performance to beat Millwall 3-0 earlier this season but lost 4-0 to Leicester City the following week. Clough has led Derby to 18th, 14th and 19th-place finishes during his reign at Pride Park; inconsistent but there have been reasons for it.

Nigel Clough may not have enjoyed the relatively swift success at Derby County that his father and Peter Taylor did in the late-60s but as football has moved on, the likelihood of instant success without significant investment has dwindled. Clough walked in to a club burdened with debt and an out-of-control wage bill and deserves great credit for the way he has chopped and changed his side without sliding into League One.

The evidence from the first half of the 2011/12 season suggests that the green shoots of progress are finally emerging. A shrewd transfer policy and significant investment in the club’s youth system have helped toward some genuine progress being made on the pitch.

Clough has created a squad that teams find hard to break down. With a Premiership-quality goalkeeper in Frank Fielding and a settled back four, Clough is building from the back just like his father did in those glorious days at the Baseball Ground. That inconsistency is something Clough must address but with a young, determined squad and a healthy financial outlook, Derby County’s future is looking somewhat brighter than it has in a long while.

The “second coming of Clough” is finally starting to show promise.