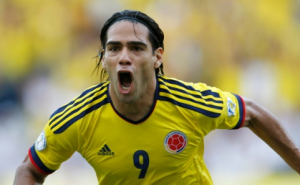 June 26, 1998. David Beckham curls in what was already becoming a trademark free-kick, and England go on to defeat Colombia 2-0 in their final group stage match at France 1998.

England, of course, progressed from the group, albeit in second place behind Romania, and went on to have a match against Argentina in which very little happened. Owen’s goal? Beckham’s red card? Penalty shoot-out? Nope, no idea.

While that was to herald in a new era of disappointment for England in major tournaments, and was also a continuance of their inability to compete in the ‘lottery’ that is a penalty shoot-out, it was also the last time we would see Colombia at a World Cup.

Although this barren run is not quite as dismal as that from 1966-86, when they failed to make a single appearance on international football’s biggest stage, it was a poor return to those days after a spirited performance at Italia ’90, and consecutive group stage appearances in ’94 and ’98.

Gone were the likes of Carlos Valderrama, Freddy Rincon and Faustino Asprilla (and, of course, it would be remiss not mention Rene Higuita!), and with them went the ‘glory days’ (relatively speaking). They did win the Copa America in 2001, which looked like the beginning of a new era, but it proved little more than a false dawn as they failed to reach the 2002 World Cup, something they would replicate four and eight years later.

Now, though, not only are they set to qualify for Brazil 2014, they are well-placed to spring a surprise or two at the tournament next summer.

They currently sit second in the South American qualifying group, just three points behind leaders Argentina with a game in hand, and have recorded some impressive victories, including a 3-1 win over Chile and a 4-0 defeat of Uruguay.

The obvious answer to this turnaround in fortunes is a tiger, or rather El Tigre, better known to most as (Radamel) Falcao.

The Colombian striker is arguably the most feared conventional striker on the planet at the moment, having scored 70 goals in just two seasons with Atletico Madrid, coming from only 90 games, which followed a similarly ridiculous return of 72 from 87 games for Porto.

Indeed, given the plausibility that the goalscoring feats of Messrs Messi and Ronaldo cannot be attributed solely to forces on this world, he is perhaps the best entirely human footballer around at the moment. Linked with the likes of Chelsea and Real Madrid, he will instead by plying his trade for newly-promoted, megarich Monaco next season in a move that absolutely was not motivated by money, after they shelled out around €60 million for his services.

His record for Colombia is rather more modest by his standards, with 17 goals in 45 appearances, but he has started to perform consistently at international level with seven goals thus far in WC qualifying.

If Falcao is the leading man, then he is surrounded by an increasingly talented supporting cast. One of these will be joining him at Monaco next term, after they splashed a similarly stunning figure on him this summer: James Rodriguez.

Only 21 years of age, he is regarded as one of the best young players in European football at the moment, with a move to one of Europe’s top clubs long-mooted, while his speed, shooting and dribbling have seen him draw not unfair comparisons with Cristiano Ronaldo.

While Rodriguez has been compared to the ‘current’ Ronaldo, one of his countrymen – Luis Muriel – has been compared with the original/Brazilian(/best?) one. The striker has yet to establish himself fully at international level, but has done at Udinese this past year and could be one of the tournament’s breakout stars.

It isn’t all flash forwards for the Colombians though, as they also possess a fair bit of talent across the rest of the pitch too. In midfield, it is Inter’s talented Freddy Guarin who may be the biggest name, but arguably it’s Abel Aguilar who has the biggest impact, with his passing ability setting the tempo and seeing him become the fulcrum of the team. It’s also worth mentioning another promising youngster, Juan Fernando Quintero, who has impressed at the South American Youth Cup and the U20 World Cup.

At the back, there’s the captain Mario Ypes who, at the ripe old age of 38, continues to be a key figure for the side. Currently looking for a club after his contract with Milan expired, there has been talk of Ypes retiring once the qualifiers are over, but if he can spend the next year playing somewhat regularly, then there’s no reason he shouldn’t bow out after the World Cup he, more than anyone else in the side (he made his international debut in 1999), has missed out on.

Elsewhere, they have solid full backs in Napoli duo Juan Camilo Zuniga and Pablo Armero, while between the posts they have David Ospina who, just 24, has long been established as his country’s first choice.

There are undoubtedly others who deserve a mention – Porto’s Jackson Martinez, for one – but no cast amounts to anything without a good director, and it’s in this department Colombia appear to have struck gold.

Jose Pekermen is the man who has led Los Cafeteros out of the international wilderness, and has received a great deal of credit for the new era of Colombian football.

He is best known for managing Argentina at the 2006 World Cup and, despite losing to Germany on penalties in the quarter-finals, was someone the Argentinean hierarchy wanted to hang on to and fans fondly remember, not least for introducing the style of play that led to *that* Estaban Cambiasso goal.

There’s also the small matter of his success with the Argentine U20 side, whom he guided to not one, not two, but three U20 World Cup titles.

It is he who has overseen the turnaround in fortunes of the national side, and the introduction of youngsters such as Rodriguez, while getting the best out of Falcao.

It is he who will be in charge as they start the World Cup campaign next year, and it is he who may well find himself a far bigger name than he is currently after the tournament.

While the likes of Brazil and Argentina are rightly favourites, the fact that Colombia will be used to the South American climate that could affect the much-fancied sides such as Germany and Spain, while also being ‘underdogs’ could mean a deep run into the tournament, and they’d make very dangerous opponents for anyone who faces them.

They are, if you like, the ‘South American Belgium’, and while they may not win, there’s a lot to suggest they’ll be a far more recognised side in one year’s time.

That said, at the time of writing (or rather, a bit after, hence tagging it on at the end), they are now third in the FIFA rankings, a position recently held by England. Oh well…

3 thoughts on “The Road to El Dorado and Rio 2014: How Colombia struck gold”