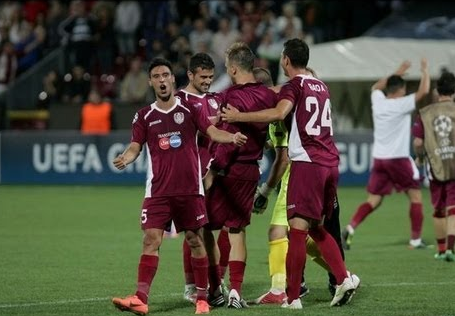 Nicknamed ‘The Railwaymen’, CFR Cluj have come a long way in the last ten years, ahead of perhaps the biggest game in the club’s history against Manchester United, on Tuesday night. The story of how the Transylvanian based club emerged from near bankruptcy in the ‘90’s to reach the pinnacle of European football is a story which seeks to highlight the significance of money in the game.

After being relegated into the second division of Romanian football in 1976, Cluj went into major decline. They failed to get back into Liga 1 for the rest of the 20th century and struggled to financially survive, going ever so close to the brink of no return. It was the year of 2002, when the club would be saved and reignited by the help of one man – local businessman, Árpád Pászkány. Pászkány was involved in the business of selling used cars and bought the club when they were languishing in the depths of the third division. Many believed the new owner was insane when he announced that his club would win the Liga 1 crown within four years. He was slightly out with his ambitious prediction, as it in fact took the club six seasons, yet the resurgence of the club was remarkable.

Pászkány took the club on in January, which coincided with the season’s winter break. He rejuvenated the club as they were promoted back into Divizia B at the end of the 2001/2002 season. After spending just two seasons in the second division, CFR Cluj achieved what seemed impossible only a matter of years earlier by securing promotion to the top tier of the Romanian game.

Their stadium, Stadionul Dr. Constantin Radulescu, built in 1973 had a capacity of around just 10,000. This modest stadium sufficed for second and third division matches. Cluj had climbed up the league ladder and were in need of a stadium to reflect their revival and further ambition to join Europe’s elite. Pászkány more than doubled the stadiums capacity to a 23,500 all-seater capacity over a four year long project. This €20 million project involved the erection of 3 modern stands and gained a three star UEFA rating allowing the club to host Champions League games. Pászkány’s decision to take out this huge renovation on the stadium reflected his appetite for greater things.

As we have seen in England, the arrival of foreign investors to allow for imports of marquee signings and huge wage bills has seen sides such as Manchester City and Chelsea become dominant European forces in recent years. However, the involvement from a local businessman to revive a stuttering club and power them into competitions that the fans could only dream of truly is a fairy tale story.

Yet there is a lot in common between Pászkány and Chelsea owner, Roman Abromovich. In fact Cluj are perceived in some quarters as the ‘Chelsea of Romania’. In terms of managers, the former car salesman has never been scared to chop and change his managers. In the 2003-2004 season he sacked two managers in the same season. This included getting rid of Gică Ciorceri in spite of securing 13 consecutive victories earlier on in the season. Moreover, in spite of a good run of form in the league, Pászkány relinquished the services of Adrian Coca after being disappointed by the White-Burgundies style of play. Pászkány himself hasn’t been shy of controversy over the years. In 2003 he accused several referees of corruption which begun a public scandal, having an adverse effect on the team’s performance.

With money at his disposal, the local tycoon was able to attract talented players to CFR Cluj. This included Adrian Anca, Cristian Panin and Dorinel Munteanu who were players of international pedigree. After reaching Liga 1, Cluj improved season upon season. Pászkány sprinkled his squad with South American imports as the Romanian outfit was blessed with talent from Argentina, Brazil and Uruguay. Moreover, a partnership was struck with Benfica in 2007 which resulted in an influx of Portugese players into the squad. In the 2007/2008 season they reached the Promised Land by landing a League and Cup double with a squad mostly composed of foreigners. It was due reward for an owner who had put so much time, money and belief into the Railwaymen, rescuing a club from the wayside and in the space of 6 years turning them into a Champions League outfit.

Whilst many assumed the newcomers would be the whipping boys of Group A in the Champions League 2008/2009 season, the Romanian side showed they were not just there to make up the numbers in their first appearance. As well as securing a draw at home to Premier League giants, Chelsea, they recorded a famous win away to Roma at the Stadio Olimpico. They defeated the Italian side 2-1 in what was regarded as one of the biggest shocks in Champions League history, courtesy of a brace from Argentian, Juan Culio. They won the league title again in 2009/10 in which they were rewarded with another trip to Roma, in addition to a visit to the Allianz Arena, where they narrowly lost to Bayern Munich.

Whilst far from building a legacy in the Romanian league, they have won the title three times since their return to Liga 1 in 2004/2005. They face stiff competition mainly from the Bucharest sides but in recent years it really has been anyone’s trophy to win.

Whilst CFR Cluj’s rise from the very bottom to the pinnacle of Romanian football has been a rapid transition, Pászkány still has great ambition for evolving this club into a dominant force in Europe. His flaw lies in his desire for quick success as can be seen through the revolving door for managers at the club. Manager Ioan Andone has returned for another spell and with a far from impossible Champions League qualification group, Cluj may be able to make their furthest inroad into a European competition to date.

The story of Cluj is another indication of how the combination of heavy investment and serious ambition is perhaps the most potent combination there is in this modern day game.

One thought on “The rise of Romania’s finest”