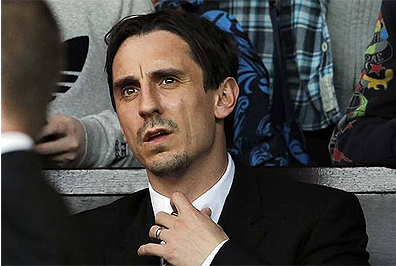 Upon his surprise retirement from football in the midst of the 2010-11 Premier League season, many were tipping Neville to join the list of ‘ex-Fergie’ players who have moved into management. He instead first set about a career in punditry, successfully filling the vacuum left by Andy Gray at Sky Sports.

Now Gary Neville has finally come good to those assumptions and been announced as a member of Roy Hodgson’s England backroom team, signing a four year deal.

In his time as a pundit Neville has so far shown a large degree of common sense and honesty. A particular piece on theatrics in the game has been praised by many for just how honest it was regarding something that few want to admit is now an integral part of the game.

Neville has effectively reinvented himself, shrugging off the shackles of his ‘Red Nev’ persona. He becomes visibly uncomfortable when his past actions are discussed during segments on Sky Sports and it is a very good sign that Neville recognises his past errors and how they are best being left in the past.

Those questioning the decision due to Neville’s lack of experience as a coach can rest easy. Neville holds UEFA A and B coaching licenses and his analysis of the game on Sky Sports has helped show all his astute tactical knowledge on a weekly basis.

As a player Neville has played in 5 international tournaments and will understand the amount of pressure players will be under this summer. Neville has only been out of the game for just over a year now, it can therefore be assumed that he still will fraternise with many players as if he were still one of them. This would be handy for Hodgson as he would have a man on his side who can effectively turn any doubters of the new regime into believers.

Roy Hodgson is showing that he is looking to build a strong team around him. His decision to relieve Stuart Pearce of any senior squad role showed guts, as Pearce had somehow managed to mould himself into an important part of the senior England set up. He has now been asked to rightly focus on his work with the u21 and Olympics squads.

As well as Neville, Hodgson also appointed the experienced Ray Lewington with whom he worked with at Fulham and goalkeeping coach Dave Watson, who has worked with Joe Hart in the past, although both are only taking up their roles for the Euro 2012 competition. It can be assumed more appointments will be made, as many left the England backroom staff when Fabio Capello stepped down.

This role will help propel Neville into a successful career in management, rather than jump straight into the belly of the beast, Neville has allowed himself to be asked to enter. Neville could have looked for a coaching or even management role immediately after leaving Manchester instead he considered his options and made the right decision.

Many players have underestimated the task of management in the past, Neville clearly understands the magnitude of such a position having played under one of the greatest manager’s in the history of the game.

Despite being appointed to the role Neville will still continue as a pundit for Sky Sports, something which could see him be forced to tone down some of his candid opinions. It would be difficult for Neville to go from heavily criticising a player on TV to coaching them. It would be expected that eventually Neville would step down from his role with Sky to fully focus on his duties with England.

His work as a pundit has attributed to the high level of respect he now commands in the game. When asked about the appointment Hodgson spoke of how impressed he was with his analytical skills on Sky Sports. This could be the wakeup call Jamie Redknapp has needed for years.

The biggest concern that Roy Hodgson and his backroom team will have to contend with is how to handle the delicate issue regarding John Terry and Rio Ferdinand. Hodgson is reportedly yet to speak to either and has apparently been informed that the rift is far too wide to be dealt with.

Gary Neville heavily criticised the decision by the FA to strip John Terry of the captaincy following the announcement that he would be charged for alleged racism of Anton Ferdinand, an issue which led to Capello quitting his role. Neville is however a good friend of Rio Ferdinand’s having played with him for 9 years at Manchester United, whether Neville will choose to get involved in the issue or not is yet to be seen. He may in fact be the only man who can advise Roy to make the best decision.

Neville will most likely be placed in a role focusing on coaching the back line, his vast experience as a Premier League right back will prove invaluable. Neville’s work deeply analysing Premier League footballers for a season could mean he already has ideas as to what needs to be done to turn this current batch into a winning team. He has without doubt had much to criticise regarding some poor defensive performances in the league this year.

A year ago many were questioning the decision to even appoint Neville as a pundit for Sky, questioning whether he had it in his locker to offer expert views to the standards of Jamie Redknapp and Ray Wilkins. Now Neville’s appointment as a coach for England is being welcomed as a stroke of genius from Hodgson, and it is.

Roy Hodgson needed to do something different to set himself apart from the reputation he has acquired as an adequately average manager. Similarly to Roberto Martinez this season Gary Neville has become hot property and Hodgson immediately took his chance to take this valuable asset on. Neville has it in him to become a world class manager and if he can help Roy to a successful reign as England boss he could find himself with a long list of offers from top clubs.  There would be no prizes for guessing which job he will always have his eyes on though.

One thought on “The rise of the ‘new’ Gary Neville”