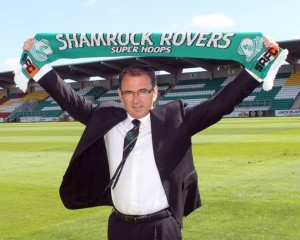 They dithered over whether or not to relieve Trevor Croly of his managerial duties – and effectively ended the club’s title chances as a result – but the Shamrock Rovers board moved swiftly in appointing his successor, Pat Fenlon.

Less than 48 hours passed between Fenlon returning to Dublin from a holiday in Spain and the announcement of his appointment on Wednesday morning.

There was no lengthy recruitment process, no trawling of Ireland and the UK in search of applicants – the board, under pressure from an increasingly disillusioned fanbase, identified their man and secured him in time for a home debut against his former employers, Derry City.

In between, Fenlon had returned to another former club, Bohemians, to see a Rovers side overseen by caretaker John Gill dismantle the Gypsies in the EA Sports Cup semi-final with a freedom and ease that hadn’t been seen during Croly’s second season in the dugout.

It’s impossible to know if the players were aware that their future boss was in the stand watching, but there’s little doubt that the likes of Conor Kenna, Sean O’Connor and Marty Waters – each of whom have struggled to get going in Tallaght – played with a rare verve inspired by the prospect of a clean slate and a new beginning.

There was always something inevitable about Fenlon one day taking over at Rovers. In spite of his well-known association with Rovers’ Dublin rivals Bohemians and Shelbourne, his links with the Hoops are well-established.

The Shamrock Rovers job has, historically, been the biggest job in Irish football, but 25 years of homelessness had gutted the club financially and competitively, and it’s only in the last couple of years that the Rovers job has once again become big enough to satisfy Fenlon’s ambition as a coach.

The man nicknamed ‘Nutsy’ has been a regular at Tallaght Stadium since resigning his post at Hibernian midway through the Scottish league season, so he will have had a good idea of what he needed to do before ever setting foot on the training field.

The major problem faced by both Croly and his predecessor Stephen Kenny was the sense that the squad were never fully convinced of their managerial ability. Rumours of Kenny being locked out of the team dressing room at half time a crucial game abounded before his reign was drastically cut short, and the humiliating manner of his dismissal did little to dispel the perception player power had won out.

Croly was reportedly well-respected as a coach by the players – initially at least – and deserves credit for weeding out some of the troublesome characters inherited from the previous regime, however the body language of his players became increasingly more negative during his second season as they struggled to implement any sort of coherent game plan.

Fenlon, by contrast, won’t have any such trouble when he takes charge of his first game as Hoops boss. He has proven experience of managing lofty expectations and big egos in the dressing room and has a reputation as a man-manager who players enjoy playing under, and his loyalty is typically rewarded in kind.

A case in point is the success enjoyed by the notoriously troublesome character Leigh Griffiths (last seen wandering aimlessly in a sea of Poles at Murrayfield) – Fenlon’s sole full season in charge coincided with the most prolific year of a young striker’s career that has otherwise fallen well short of expectations.

Griffiths was effusive in his praise of Fenlon following the Dubliner’s resignation – crediting him as a ‘father figure’ and claiming he wouldn’t be where he is without him – although he’d since returned to his parent club, Wolves.

It’s in stark contrast to the send-off he was given by Garry O’Connor, another troublesome character but lacking the talent to back it up.

Fenlon won’t have to deal with anybody as difficult nor as outrageously talented as Griffiths at Rovers, but there is unlikely to be a repeat of the toxic atmosphere that surrounded Kenny’s brief reign at the club, nor the negativity that engulfed the fanbase as Croly’s regime stuttered to a halt.

And for all the criticism of Croly, as Fenlon himself, the outgoing manager left the club in half-decent shape both on and off the field, with European qualification still a realistic prospect and sterling work done behind the scene to assemble a competitive reserve side drawing mainly from the underage ranks.

A strong run-in in the league will give the club a strong platform to approach next season with optimism, while Fenlon has reportedly secured an increase in the club’s budget that should make them the league’s top spenders in 2015.

Bohemians fans may not have appreciated his comments, but current Gypsies manager Owen Heary – who captained the club under Fenlon – was in good company when he tipped the 45-year-old to succeed at Ireland’s most decorated club and, eventually, eclipse the record of seven individual league titles set by Jim McLaughlin.

Fenlon has five to his name already – three at Shels and two at Bohs – and few would be overly surprised to see him surpass the legendary former Rovers and Dundalk coach in the coming seasons.