Those familiar with Diego Simeone and his tactical style before this season will be aware of his affection for the classic 4-4-2 formation with an emphasis on defensive solidity hence, why it became such a shock to see Simeone switching to a variation of 3-5-2.

Simeone’s side is about fluidity, players like Koke, Marcos Llorente and Thomas Lemar have been able to fit in various positions. This has allowed Simeone to rotate in a condensed season.

Atletico Madrid have had remarkable success since making this formation change in November and as a result currently sit top of the table in La Liga with a four point lead over second place Barcelona. This early season success could become the difference between leaders Atletico and Barcelona and Real Madrid.

Under Simeone Atletico have always been a defensive team often sucking up pressure before hitting opponents on quick counter attacks. This has resulted in a much more direct style of play but, an extra defender this season means building from the back is a more realistic possibility.

Simeone’s preferred back three this season has been Mario Hermoso, Felipe and Stefan Savic however, when fit Jose Gimenez sits in the middle of the three rather than Felipe. Although not terrible none of these defenders are exceptional ball players. When building up from the back the two wide centre backs (usually Hermoso and Savic) push moderately high and wide while, Felipe (when playing) tries to stay out of the way when building possession up. Hermoso on the left, is a frequent outlet for Jan Oblak’s long passes from goal kicks because of his height, strength and passing ability.

Hermoso is probably the best passer from the back three hence why he is targeted most by Oblak. Hermoso is a decent passer over both short and medium distances having a completion percentage of 93.7% and 90.6% respectively this season. However, over longer distances is where Hermoso gets caught out with a poor completion rate of 59.6%. To combat this Atletico’s heartbeat and captain Koke, often drops in front of defence to bring the ball forward.

Simeone has a knack for building his teams around his best players, this switch to three at the back accommodates Kieran Trippier fantastically. Trippier, a brilliant crosser of the ball is able to find more space down the right flank while, this year he has been able to push higher up due to being partially relieved of his defensive duties.

Trippier failed to miss a minute of football before his ten-week ban in December however, before his ban the Englishman had notched up an impressive 5 assists in 14 La Liga games. Trippier is present in both final thirds and despite moving further up the pitch he is contributing to more tackles and interceptions per 90 than ever before. Trippier is averaging 2.64 tackles per 90 this season contributing a similar amount to last season in both the defensive and middle third (1.21 and 0.93 respectively). Trippier’s new position is most evident when looking at his attacking third actions. The Englishman contributes an impressive 0.5 tackles per 90 in the attacking third way up last seasons 0.14. 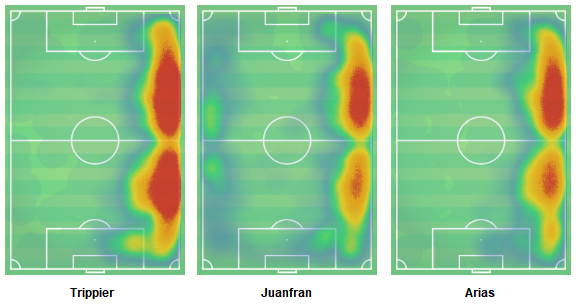 Trippier has been a fantastic signing for Simeone and showed that Atletico missed a mobile right back. The above heatmap taken from the 2018/19 season shows touches in both attacking but, Trippier’s touches particularly the defensive third are far greater than both Juanfran and Santiago Arias. Trippier’s mobility and threat has been greatly missed during his ban, with both the versatile Llorente and out of favour Sime Vrsaljko been deployed down the right flank in his absence.

Diego Simeone tends to line up with some combination of three midfielders. These midfielders boast great versatility making the team very fluid while, the extra man in midfield has allowed Simeone’s men to create central overloads against the re-emerging 4-4-2. 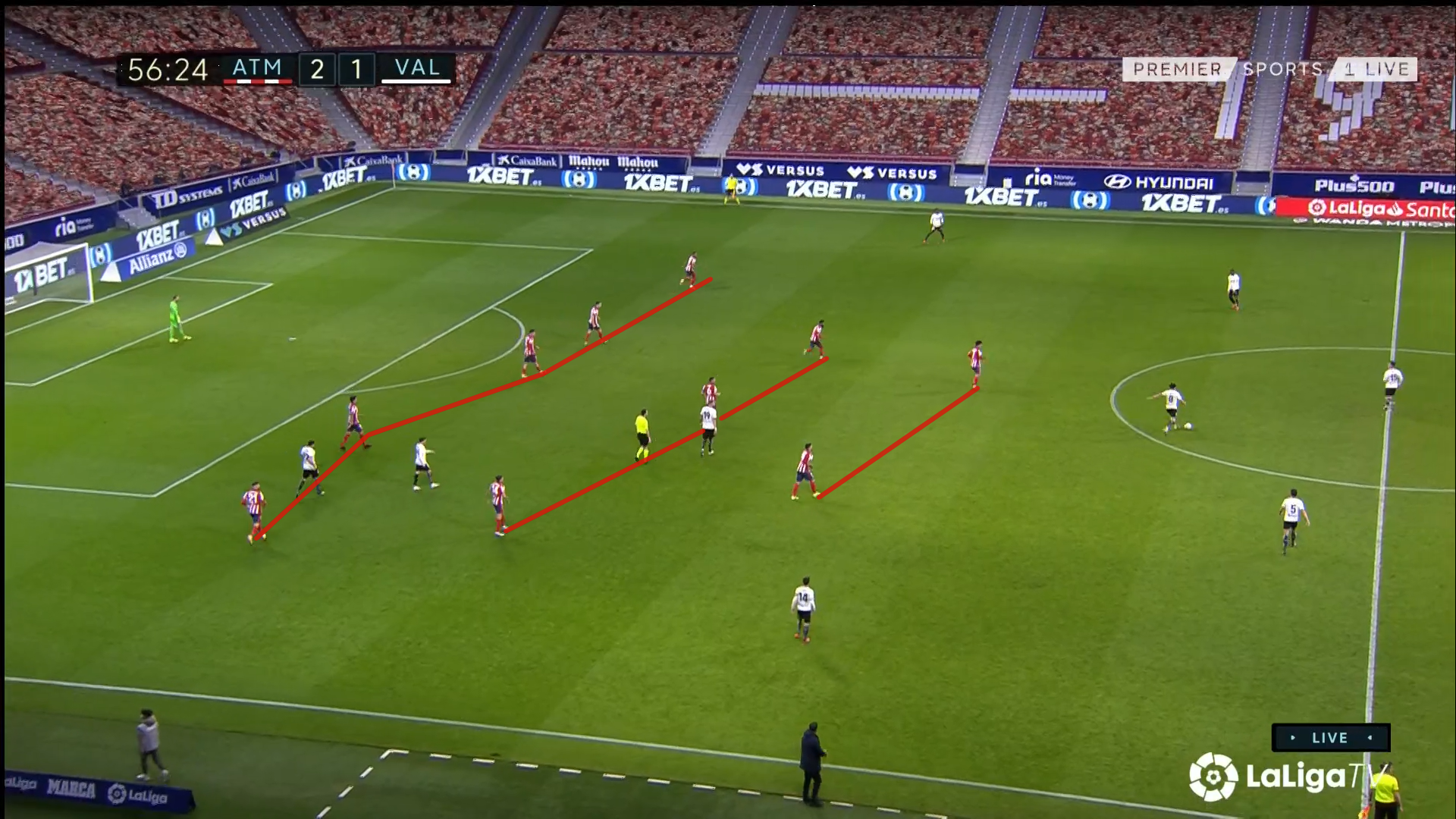 Koke, Simeone’s captain is the perfect example of the versatility demanded within the midfield. Originally starting off as an attacking midfielder in his youth before being used out wide in Simeone’s 4-4-2, Koke has found a new role as a ball winning midfielder and the heartbeat of the team.

Koke’s role is one of destruction, when out of possession the three-man midfield sits compactly Infront of the defence. The team does not rely too heavily upon pressing to win possession back. Instead, the midfield three will shuffle across the pitch depending on where the ball is. 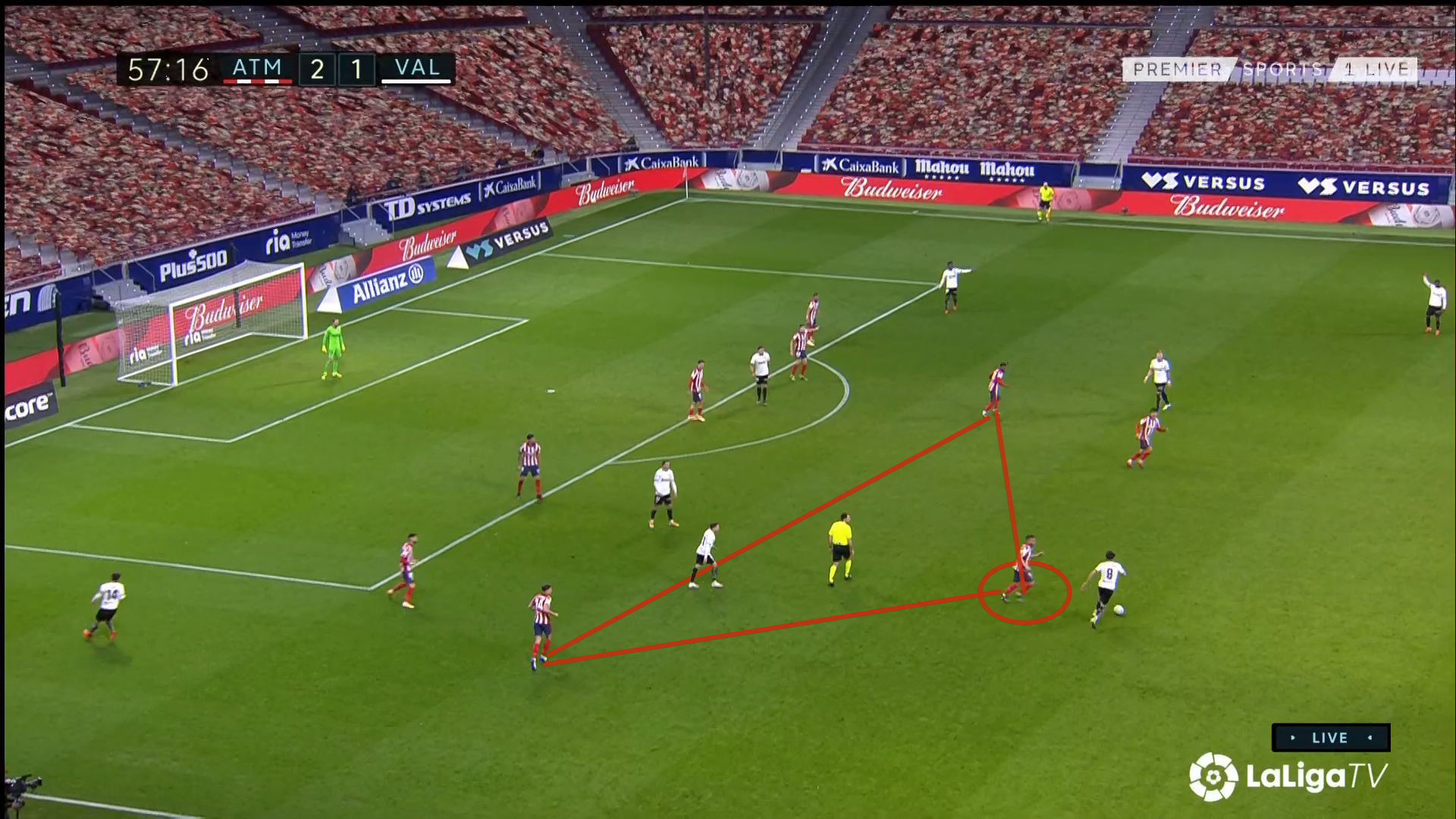 As we can see from the above photograph Koke is the most aggressive out of the midfield, being the first to break the midfield line and press the opponent. Koke is suited to this position not just because of his impressive 3.4 tackles and interceptions per 90 but because when he wins the ball he is able to play a pass to either the withdrawal forward (usually Joao Felix or Angel Correa) or a long ball to Luis Suarez up front. 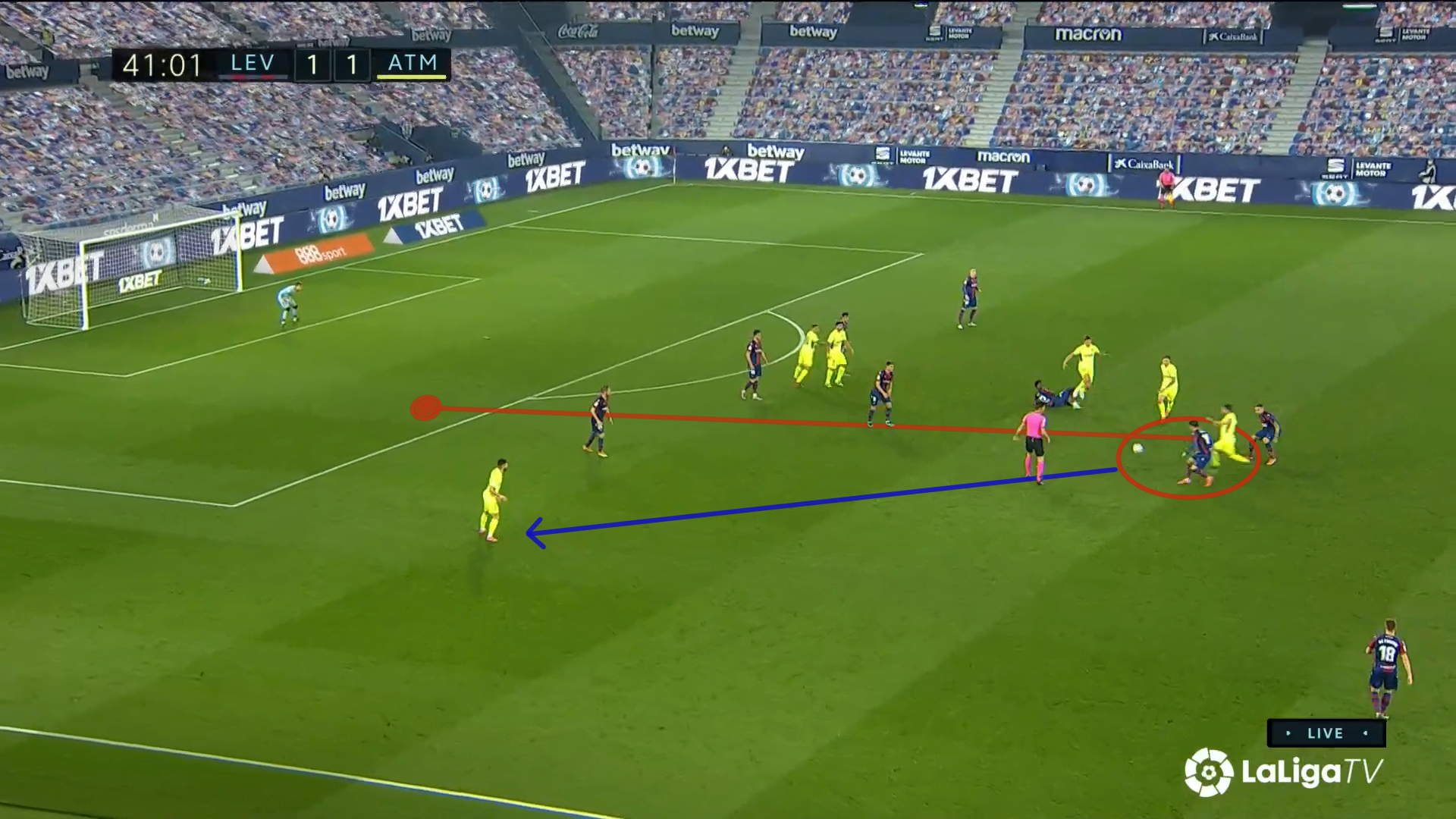 The above photo is a perfect example to show Koke’s importance to his side both defensively and offensively. Koke makes an interception on the edge of the Levante final third before immediately passing to Yannick Carrasco. Koke than makes an underlapping run and has the ball played back. Koke’s cross to Suarez is blocked but it shows his ability to launch quick attacks from winning possession back. 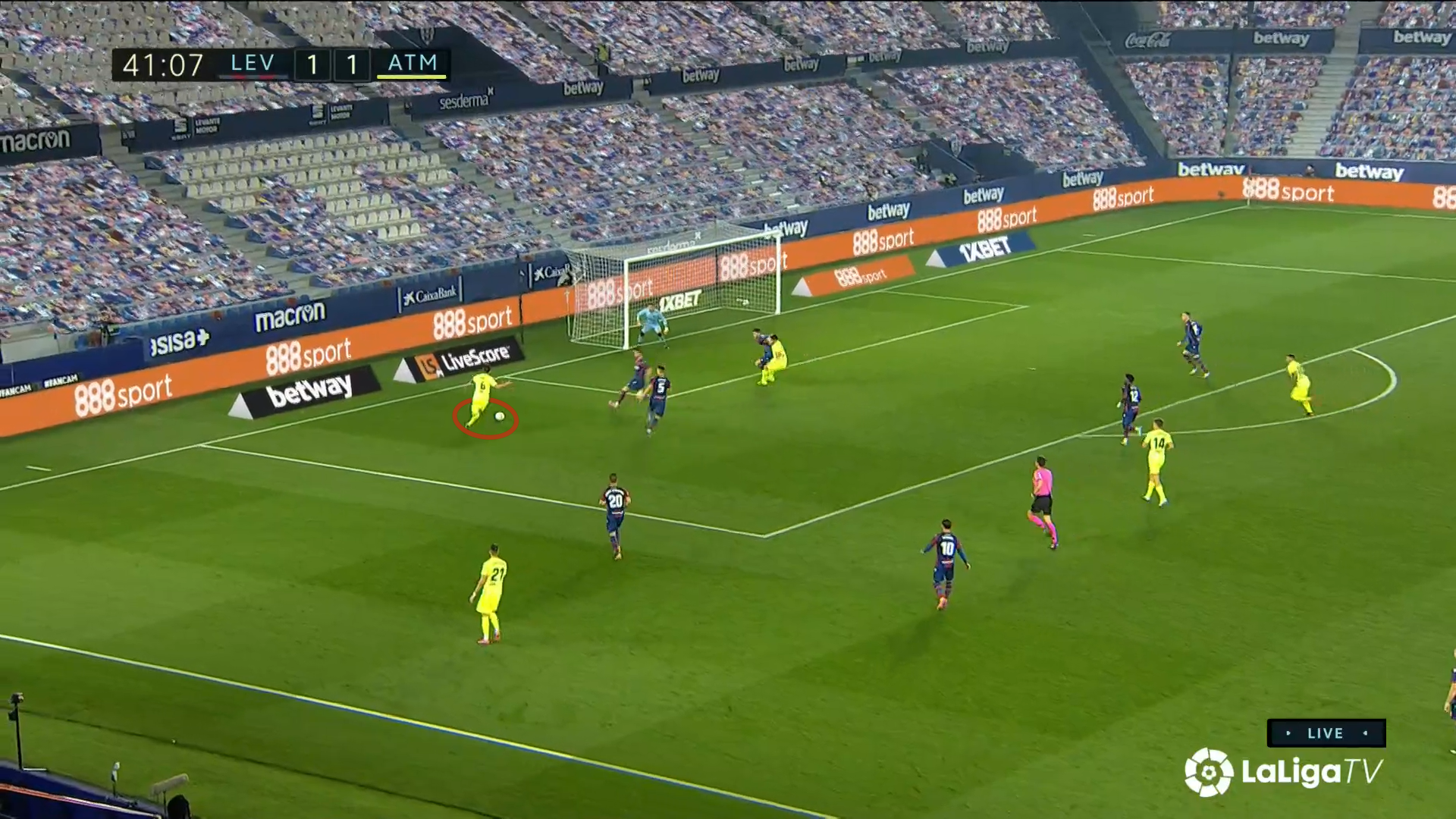 Signed as a defensive midfielder for €30 million from Real Madrid in the 2019 summer window, Marcos Llorente had a disappointing first campaign at the Wanda Metropolitano, with many Atletico fans writing him off. Simeone however, still believed in the Spaniard moving him further forward halfway through the 19/20 season with Llorente even scoring twice against Liverpool before an abrupt stop to the season.

This season Simeone has played Llorente on the right of the midfield three utilising his pace and stamina to play him in a box-to-box role. Llorente’s ability as a jack of all trades but, a master of none has made this role ideal for him. An impressive 50% tackle success rate helps to sure up the defence while 1.29 successful dribbles per 90 and 79.9% pass accuracy is decent without been great. This all-round ability has led Simeone to put Llorente in at RWB in Tripper’s absence.

Llorente has already produced 17 goal contributions in only 24 games this season. Although impressive it is highly unlikely he will continue at this rate. 9 goals from an XG of 2.6 and 8 assists from an XA of 2.6 show although a great footballer, this purple patch will probably not continue, and the goal contributions will evidently slow down.

The third central midfielder used by Simeone has varied a lot this campaign with Thomas Lemar enjoying somewhat of a phoenix season. Originally an unsuccessful winger since his move to Madrid, Simeone has finally found a place for the Frenchman both at left wingback or, the left side of midfield. Able to play a similar role to Saul, Lemar has kept him out of Simeone’s team for a large spells of this season.

Geoffrey Kondogbia is a defensive option for Simeone, with only three starts the defensive midfielder has played most of his minutes (423) from the bench. Often brought on to keep hold of leads towards the end of games, Kondogbia’s defensive ability has helped Simeone’s side to sure up the midfield. In Atletico’s recent 1-1 draw with Levante, Kongodbia was brought on to stop the threat of Levante on the counter. 5.96 tackles and interceptions per 90 this season shows how effective he can be when utilised in Simeone’s midfield.

Arguably the final piece to the Atletico puzzle, Suarez has provided a reliable and consistent goal scorer. Rarely left isolated, Suarez has usually been accompanied by either the deeper and technically proficient Joao Felix or the workman Angel Correa.

Felix has had a breakout season, scoring seven and assisting a further four in La Liga. This season Felix has been playing a deep lying forward linking the midfield with Suarez up top. Felix’s excellent dribbling means the young Portuguese forward often makes mazey runs carrying the ball long distances. Joao’s stark improvement in his dribbling and finishing has resulted in the silencing of many critics.

Felix has not only doubled his dribbles per 90 but increased his success rate from 34.5% to 51.9%. He has also improved his shooting this season, already out scoring last seasons total with a smaller XG. Interestingly, despite an improvement in goalscoring, Felix has actually managed one less shot per 90. Although, he has increased his shot on target percentage, resulting in Felix outscoring his XG by 2.1 this season, compared to underperforming his XG by 1.4 last season.

Despite Felix’s improvement this season Simeone has still often opted for workman Angel Correa ahead of him. Although far less technically proficient, Correa offers more defensively than his Portuguese counterpart. 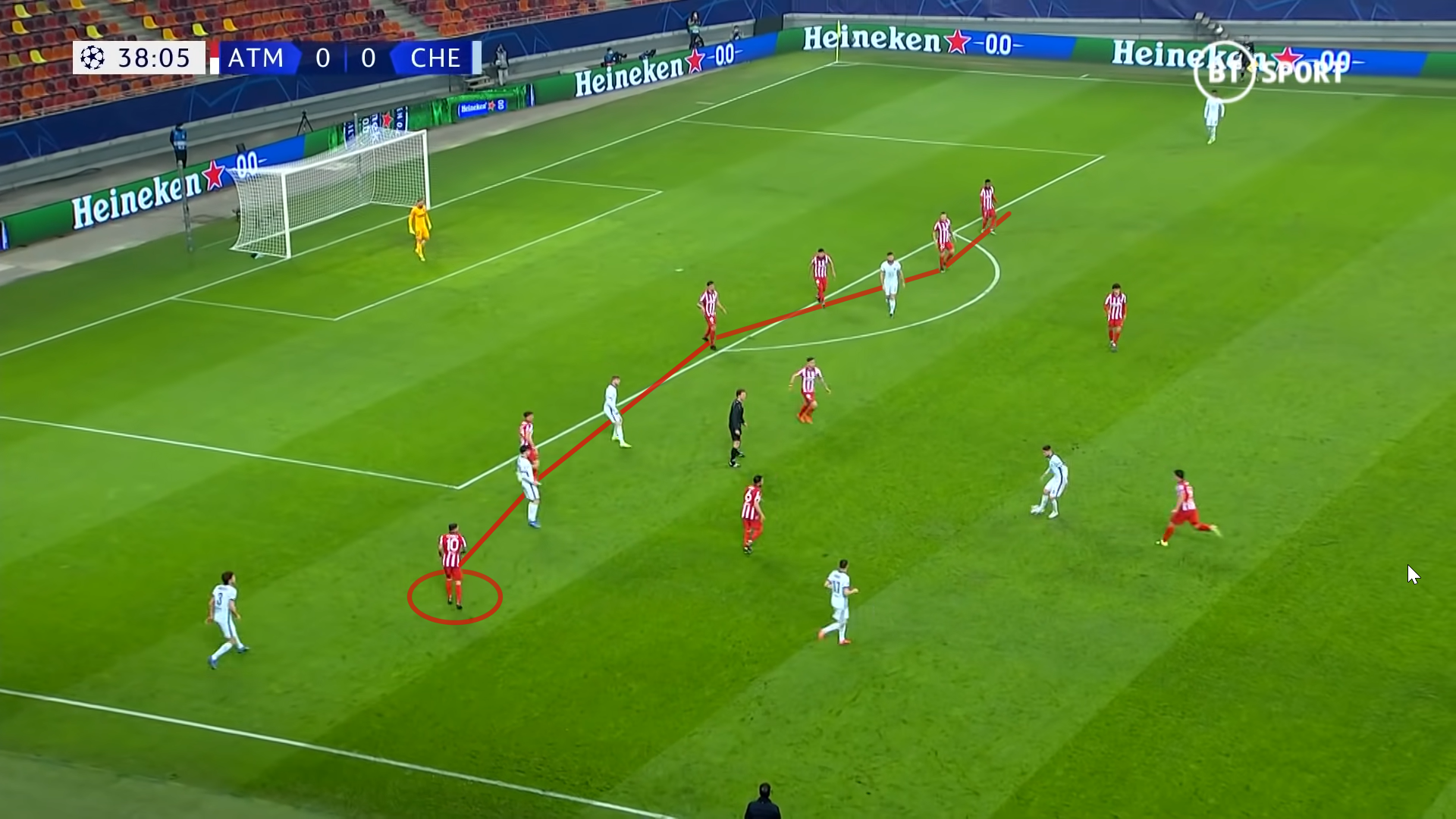 Atletico’s recent Champions League game against Chelsea showed exactly what Correa offers to Simeone’s defensive side. Atletico essentially lined up with a back six, with Correa deputising as an addition right wing-back who would bomb forward every time possession was won. Felix’s limited defensive output and work rate is the main reason Simeone has preferred Correa.

Suarez, an efficient goal scorer is something Simeone has been searching for since his last La Liga triumph. Griezmann’s highest goal tally was 22 during his spell at Atletico Madrid, Suarez already has 17. The importance of Suarez is realised when the Atletico defence has not actually improved, despite the higher league position. Rather, Simeone has found a forward he trusts to consistently put away chances.

Of course, Suarez is not getting any younger thus, Simeone has had a find a different role for him than the Suarez of old. He no longer has the legs to chase down every ball for 90 minutes or even rely on his pace to look for balls in behind of a high line. Instead, as Simeone himself admitted, Atletico need more possession in the opposition’s half to allow Suarez to do what he does best. This has allowed Suarez to appear reborn, often dropping deep to help Atletico build up possession while his killer instinct has allowed him to find pockets of space in the box for simple finishes. 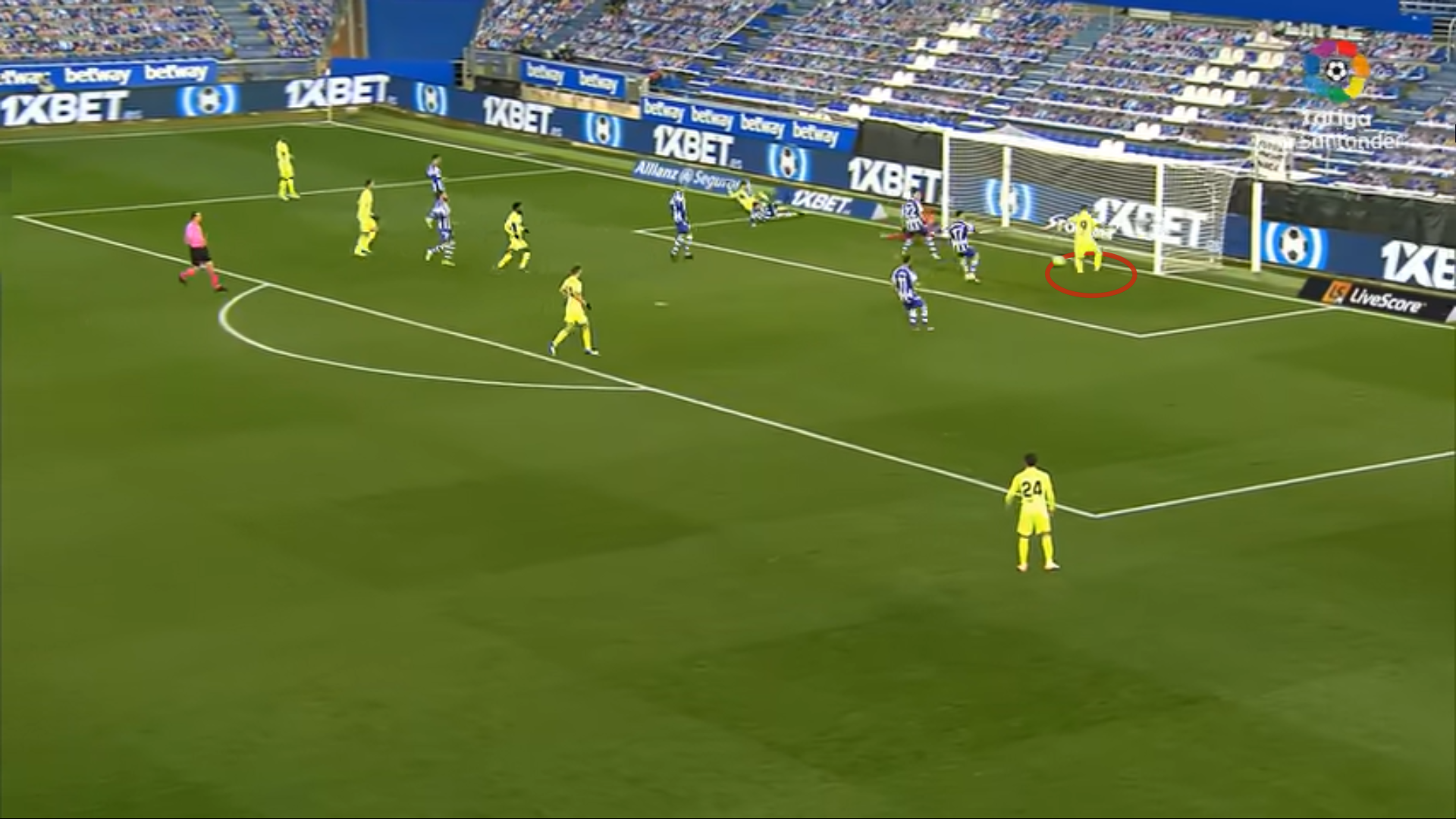 Above is a perfect example of Suarez’s ability to isolate himself in a crowded penalty area and score a simple goal. So far, Suarez has scored 17 goals outperforming his XG by 6.2, his highest outperformance in the last four seasons. This outperformance means Suarez will likely drop off towards the end of the season but, anything is possible for the greatest striker during the Messi-Ronaldo era.

Overall, Atletico’s improvement this season since the formation change has been exceptional and it shows Simeone’s brilliance identifying how best to adapt his team to accommodate for both Suarez and Kieran Trippier’s individual excellence. However, due to Suarez’s age Atletico should target a goalscoring predator like Ciro Immobile, Andre Silva or Wout Weghourst for the possibility to maintain long term success and silverware.