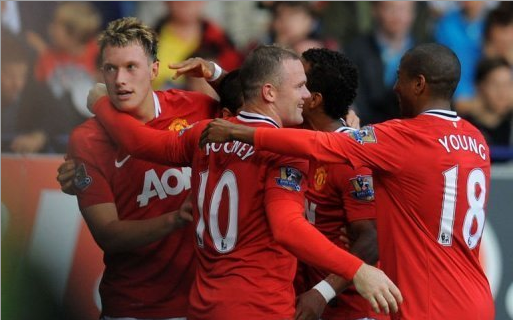 Following Man Utd’s 6-1 thumping at the hands of their ‘noisy neighbours,’ Wayne Rooney has been repositioned to a deeper midfield role and United are yet to concede a goal. Good news? Well, Man Utd have only scored twice and are still allowing plenty of shots at their goal. So is Rooney’s reposition actually a knee jerk reaction that is hindering both his play and that of his team?

Rooney and the Red Devils are rampant to begin the season

Prior to the match against Man City, the Red Devils and Wayne Rooney were playing some scintillating attacking football. After being humbled by Barcelona in the Champions League Final, it seemed as if Fergie had set his team out to emulate the boys from the Nou Camp. Spurs were squashed 3-0, Arsenal were swept aside 8-2, Bolton were battered 5-0 and Chelsea were crushed 3-1, as Fergie’s new look team were beating all before them.

After his worst season in a Man Utd shirt, Rooney had declared he would get up to the ‘Messi standard’ and began the campaign just like the Argentinean ace. Nine goals flew in from Roo’s boot and he set up two others in United’s first seven games.

Then came the game against Man City, followed by Rooney’s reposition. The team has won twice, kept two clean sheets, but United’s deadliest weapon seems to have been covered up in the centre of the park, making them ineffective going forward, but still open at the back.

Wayne Rooney before and after his midfield move

Wayne Rooney was on fire to start the season, but since his move to the middle of the park, his presence on the field in Premier League matches has been nullified:
.

.
Rooney is getting more touches of the ball in midfield, but is actually doing less with it. When he started as a striker, he was attempting 63 passes per game, making 81% of them and creating 2 goal-scoring opportunity key passes per match. Since his move to a deeper role, he is only making 2 additional successful passes a game, but no key passes to create chances, nullifying his creativity.

That’s no goals, no assists and no key passes since he has been moved in to a deeper role.

If we look at his heat maps from the home games with Chelsea where he stated up front, and Sunderland where he started in midfield, we can see how he is not working in his most productive areas:

Against Chelsea (left heat map), Wayne Rooney did the majority of his work on the edge of the Blues box (28%), but he also likes to drift out on to the left wing where he can play give-and-go passes with Ashley Young (20%), then move in to the box for a return.

Against Sunderland (right heat map), the majority of Rooney’s work is being done in and around the centre circle (24%), with him venturing forward but staying central – only 22% of his work was done on the edge of the Sunderland box. That left side wing area he likes to go and play one-twos? When Rooney ventured out to the left, it was in his-own half, where he is has little or no effect.

We’ve looked at Wayne Rooney’s personal performance since moving in to midfield, but no player is greater than the team. So has moving him in to midfield had a beneficial effect on Man Utd overall?
.

.
Prior to moving Wayne Rooney in to midfield, Man Utd were taking slightly more shots than their opponents (19.9 to 19). Since his move, they have been out-shot by 10.5 to 14 in favour of their opponents. Man Utd are taking almost half the shots at goal they previously were, but the number of shots they are conceding has only declined by a quarter.

There is also a greater disproportion in the number of shots on target Man Utd are taking to the number they are conceding. Before moving Wayne Rooney to midfield, Man Utd were hitting the target with almost 8 shots per game, whilst their opponents hit the target with 6 strikes – a plus 2 margin in favour of the Red Devils.

Since moving Rooney deeper, Man Utd are now only hitting the target with 5 shots per game, whilst allowing 4.5 on their own net – now only a plus 0.5 margin in United’s favour.

Man Utd are now not only taking less shots and hitting the target with less, but there is also a smaller differential between how many shots they and their opponents take. This will result in closer games where they could end up losing against better teams with more accurate strikers.

The unbalancing effect of repositioning Rooney

Apart from allowing Arsenal to score twice in the 8-2 rout of the Gunners, the most goals Man Utd had conceded in any game was one. Fergie’s reaction to Man Utd getting stuffed by Man City was to jam the midfield and stifle their opponents’ play.

If we look at each player’s average position on the field, again in the matches against Sunderland and Chelsea, moving Rooney in to midfield looks to have had an unbalancing effect on the team.

Against Chelsea, the average position for each starter during the match is well balanced with Wayne Rooney (10) up top and Javier Hernandez (14) in behind him. Nani (17) and Ashley Young (18) are both pushing on down the flanks, with Tom Cleverley (24) and Anderson (8) dropping in to provide cover.

Against Sunderland (below) the average positions throughout 90 minutes for the starters seems to have condensed in to the centre of the park, with the forwards sucked in to make a v-formation. This makes it difficult for United to get up the pitch and attack as they are starting from deeper and their players are closer together. With Wayne Rooney (10) in the centre circle, so close to Ji-Sung Park (13) and Danny Wellbeck (19), his only real out ball is to Nani (17) or Hernandez (14). Compacting the midfield is slowing down opponents, but is also stifling United getting forward.

.
It’s only been two games, so we’ll have to see if Sir Alex continues with this strategy, but already, Man Utd are being out shot by their opponents, which was what this move was supposed to solve.

The effect of Wayne Rooney, arguably Man Utd’s most potent weapon, has been nullified right when he was in blistering form and forcing defences to plan how to stop him. Now with Rooney sat deeper, teams have had to worry less about his positioning and can push up the field themselves. Wayne Rooney is at his best when playing up front, attacking the opposition’s 18-yard box, rather than picking the ball up in deeper positions. He had 9 goals, 2 assists and 16-chance creating passes in the Premier League prior to moving him deeper. Since then, he has 0 goals, 0 assists and 0 key passes in the Premiership.

Man Utd have had two clean sheets in the Premier League since moving Wayne Rooney to midfield. However, now their shots per game are down by half  and their opponents’ shots are only down by a quarter, so they are being out-shot in games. Better quality opposition will take advantage of this.

The effect of moving Wayne Rooney is being felt at the attacking end of the pitch, but gaining little at the defensive end and unbalancing the team.