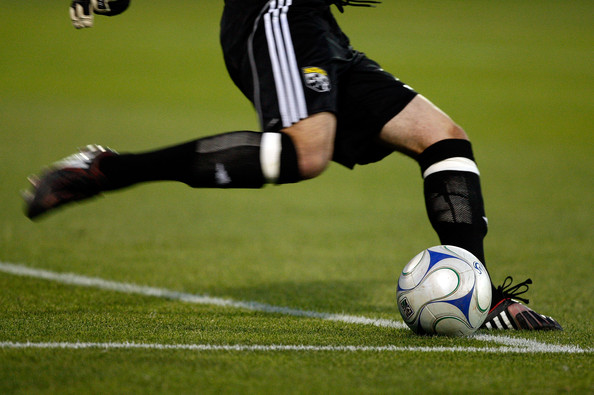 I used to know this bloke, obsessive Portsmouth fan, bit of an odd character. He used to tell a story of a goalkeeper – I’m fairly sure it was Alan Knight – who was so deep into the goalkeeper mentality that he used to send his wife potty by throwing himself around the bed at night tipping imaginary footballs over the bar.

I’ve no idea if that story was true, but it sounded plausible, because everybody knows that goalkeepers are mental.

Anyone who’s willing to hurl himself to the floor at the foot of an onrushing striker has to be missing at least a few net pegs. That makes it all the more bizarre that these crazy custodians are entrusted with one of football’s most common, and yet important, set pieces: the goal kick.

It seems like such a straightforward ask. You can’t realistically shoot from a goal kick. No-one genuinely complains if a hoofed goal kick finds an opposition head. You can even just knock it short if there’s a defender available. All you have to do, pretty much, is boot it somewhere.

Nevertheless the history of the goal kick is littered with extraordinary examples of buffoonery and failure. Some of these examples need no explanation. Here’s Rob Green.

I don’t know if it was ever proven whether he’d genuinely injured himself or was just lying there in shame. That was in an England B international in 2006 – a year later, when everyone had stopped laughing, the England B setup was binned.

When goal kicks go wrong, it may be due to the turmoil going through a goalkeeper’s mind as he runs up to a football that’s somehow taunting him by just innocently sitting there.

…is almost certainly going to result in mass hilarity and thousands of men behind you shouting “She fell over!”

It doesn’t help that every single one of the opposition fans, and a huge portion of your own fans, wants something funny to happen from every goal kick. Why do we consider keepers fair game?

I once remember watching a Leicester City match on TV, where a father behind the goal had his arm round his daughter, who could have been no more than six or seven years old.

A loving scene, taking his little girl to her first match. What the people in charge of the TV cameras can’t have expected was, as the goalkeeper took his goal kick right in front of them, daddy teaching little Chloe to shout “Ohhhhhhhhhh you’re shit, ahhhhhhhhh!”

On occasion a goalkeeper can be spared the blame for a goal kick gone wrong. Take this example from the, wait for it, the German Kreisklasse B division.

Presumably it was disallowed as anyone who knows anything about football knows you can’t score an own goal direct from a goal kick. Good old Wikipedia.

When a keeper does manage to get his kick away without disaster, where the ball may end up is the subject of a bizarre, unexplored goal-kick oddity. In some matches, every single goal kick sees every player, of both teams, troop obediently to one side of the pitch, to where the keeper will duly hoof the ball.

An entire half of the pitch is completely devoid of players and no-one seems to know why. It seemed to be restricted to the lower leagues until it was witnessed at the recent Arsenal v Crystal Palace match at the Emirates.

There’s an argument for banning promotion and relegation entirely if the teams that come up are going to bring unholy elements like this to the top flight.

And goalkeepers seemingly feel the need to stamp their lunatic authority even on this peculiar activity. At Brentford I once saw every player trudge across to the same side, but before the kick could be taken one player broke ranks and sprinted to the empty part of the park, screaming for the ball in acres of space.

The keeper’s response was to furiously wave him back to his rightful place in the pack and gloomily wait for the same goal kick as last time and the next. Some traditions must be respected, damn it.

So if you’re a budding goalkeeper, and you’re getting nervous that your next Rob Green moment is sitting there on the six-yard line, taunting you, just relax, and hoof it with all your might to whichever side every outfield player is standing. Because if Audrey can do it, surely so can you. Right?

One thought on “The peculiar art of the goal kick”