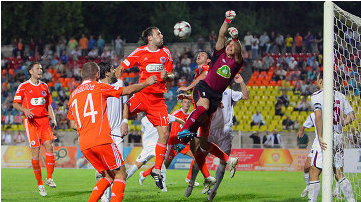 The Winter Olympics may not initially appear to go hand in hand with football. Snow, skis and bobsleds aren’t exactly items synonymous with the spherical balls, rectangular goals and studded boots of the game we know and love. However for an area of Russia the Winter Olympics may well have a hand in creating a destiny for a football club who have for too long sat in the shadowed parts of the nation’s game.

Zhemchuzhina-Sochi – or more simply Sochi – may not have a name that readily clings to one’s memory but here is a club who have a grand plan of overcoming the odds of misfortune and creating a destiny for the city of Sochi which the Winter Olympics also hopes to replicate. Sochi’s footballing history is not exactly a straight forward one – with many twists and turns amidst a sea of financial uncertainty – but with the dawn of a brighter future possibly appearing through the haze of the past, the club is now looking to the possibility of competing in the Russian Premier League.

Sochi’s inception in 1991 occurred in a fairly unorthodox fashion – it began with a hotel and its ambitious owner. The name ‘Zhemchuzhina’ translates roughly into English as ‘pearl’ which was taken from the brand name of the hotel from which the club was formed. Yuri Arintsev’s – a now well connected individual – desire to form a club that could represent the burgeoning tourist town of Sochi in the midst of the Soviet Union’s collapse proved to be a sufficient enough force in placing the newly formed team in the nation’s regionally based Second Division.

The club’s debut season in the Second Division proved to be a wildly successful campaign – far beyond the expectations of fans and investors alike – which saw the club win promotion to Russia’s second tier, the First Division. A return of 91 goals from 42 games – some 30 higher than their closest rivals – proved to be the means of dominance for a club so loosely rooted in its infancy. But the success of the 1991 season proved to merely be the catalyst for a following season that few could possibly have predicted. The purchases of the likes of Stanislav Bondarev and Gocha Gogrichiani turned out to be sound investments which left Sochi in a prime position to win promotion to Russia’s top flight – a mere two seasons after being formally recognised as a professional football club. The signing of Gogrichiani proved to be a particularly inspired piece of business as he remains to this day one of the finest players ever to pull on the Sochi shirt. The Georgian’s 41 goals in 49 games proved to be the catalyst for a season that truly shook the foundations of a nation that was in a process of stabilisation in the wake of the Soviet Union’s collapse. Sochi’s first placed finish in the First Division in 1992 took the club to the pinnacle of Russian football – a venue in which they would sit for a good 7 seasons until their relegation in 1999.

Since that day in 1999 when the club suffered the pains of relegation there have been few reasons for the team’s fans to celebrate. Disaster was swiftly followed by an ever increasing disaster and ultimately resulted in the club being officially declared as bankrupt. The path to collapse was a difficult one to swallow as in the season following their relegation from Russia’s top flight Sochi found themselves dumped out of the First Division and again back within the regional Second Division – bringing the club back down to where it began just as rapidly as it had initially risen. But the collapse down the league structure was merely a warning shot for a club that was on the brink of financial implosion. Sochi – since day one – had always had issues with enticing investment in order to maintain the leveling of the club’s books and its fall from grace made such a process even more challenging. Thus, between 2004 and 2007, Zhemchuzhina-Sochi fell off the face of Russian football with some feeling that it would never again be seen.

Dmitry Yakushev’s – a former ice hockey player – resurrection of the club in 2007 brought with it a new sense of optimism that Sochi could finally reassert itself at the top table of Russian football.  Yakushev’s grand scheme saw a vast level of investment pumped into the coffers of the club – which has seen the city, and ultimately the club, chosen as one of the host cities for the 2018 World Cup – which has witnessed yet another meteoric rise up the ranks of Russian football. However, Sochi’s fans remain cautious in spite of the team’s strong start to the current campaign as the same old issues continue to undermine the club’s development. Rumours of further financial instabilities led to fevered speculation during pre-season that Sochi would not be able to participate in the First Division due to their impending withdrawal from the competition – however in spite of the threats no such occurrence came forth and the team has since gone from strength to strength.

Under the guidance of former Spartak Moscow coach Stanislav Cherchesov Sochi have begun the season in a hugely positive manner – typified by their recent victory over promotion rivals Khimki – which has left Sochi dreaming of delving yet again into the Russian Premier League. The experience of goalkeeper Marek Cech, the goal threat of Michal Papadopulos and the youthful vigour of Igor Smolnikov has provided Sochi with a strong basis upon which to build a team capable of challenging for promotion over the course of a season that will take almost 18 months to complete. The sheer length of the competition this season means that it is hazardous to predict the overall outcome at such an early stage however Sochi remain one of the favourites to potentially provide Krasnodar Krai with the region’s third representative in the Russian Premier League.

The Winter Olympics in 2014 will ultimately place the world’s attention on Sochi’s doorstep. The city’s burgeoning sporting infrastructure – in tandem with the World Cup stadium – will provide Zhemchuzhina-Sochi with a significant platform upon which to build. The potential for investment in the Sochi area is ever increasing in spite of the economic climate and with the possibility of such windfalls streaming down into the club’s coffers the future may well become even brighter for the Pearl of Russian football.