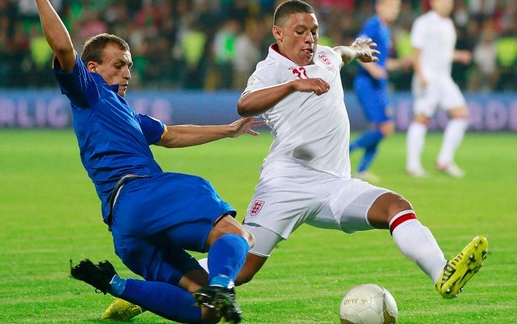 Alex Oxlade-Chamberlain was bought for Arsenal from Southampton in 2011. He was bought as a winger and at first glance, that’s where his future was going to be.

However, since the middle of last season he has been pushed to a more of a central midfielder/attacking midfielder role. This has given him more freedom to make darting run through the middles and score some beautiful goals. However, is his future set in this position, or is he only filling that role due to Arsenal injuries?

Ever since Arsene Wenger splashed out £15,000,000 for the young Englishman, it has been obvious he has been destined for bright things. His talents include great agility, a blistering turn of pace, flair, more recently strength and a lethal shot. He combines talent with awareness and sends Arsenal fans pulses right up whenever he plays.

However, after assisting an Oliver Giroud goal on the opening day if the season, he has been out injured and only returned in late January. Since coming back though, he has been in fine form and scored the only two goals of the game against Crystal Palace on February 2. In this match however, it was one of the first times Chamberlain played in a central role. He bossed the midfield and scored a well timed brace to win Arsenal the game. He also played in a central role for England in early 2013 against Brazil, getting a very memorable goal in the process.

However much I believe Oxlade-Chamberlain would be an outstanding centre midfielder, for as long as he stays at Arsenal, I can’t see him playing there week in week out. With the likes of Santi Cazorla, Mesut Özi, Aaron Ramsey, Jack Wilshere, Mathieu Flamini and Kim Kallstrom all vying for that position, he simply will be too low down the order. He will be moved back out to the wing and have to settle there. Unless he moves to another club, such as Everton or Southampton, he will not get a chance in the centre midfield. I believe it will be the same scenario for England as well.

Even though England do have many promising young wingers, Oxlade-Chamberlain is without a doubt the main man and could have a wide position to himself for the next ten years, if he so wished. England have Ross Barkley and Wayne Rooney who will take the attacking midfield role over Chamberlain. He is a promising young player who, if he works hard and keeps his head down, could get to the top of the English game, let alone the international game in a matter of years. However, I feel this will have to be as a winger.

I think his best bet in the short term is to stay at Arsenal and progress there with the brilliant staff. The, in three years, leave and continue his career at a team such as Southampton where he can get constant game time and adoration from the fans, something that will help him reach his full potential. For now he will stay in the centre, but expect him to move out wide sooner, rather the later.