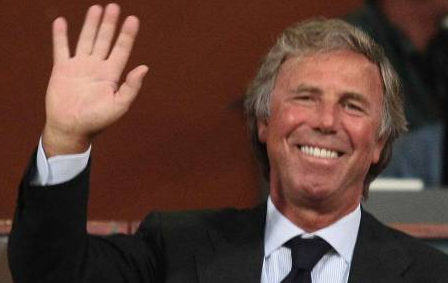 When it comes to eccentric owners, Serie A is in no short supply. Aurelio De Laurentiis, Silvio Berlusconi, and Maurizio Zamparini are usually the three that are most associated with this particular brand of crazy. With regards to the first two, their eccentricities can be excused because of how high their sides are in the table, second and third, respectively. ‘Zampa’ has been receiving more than his fair share of stick lately (and rightly so) for the mad way he hires, fires, and rehires his coaches with very little warning.

But one that has been flying under the radar recently (probably because he hasn’t fired anyone lately) is Genoa president Enrico Preziosi. Italy’s second oldest football club is again teetering on the brink of relegation for the second season running, as they are currently second to last in the league in a three way tie on points with their other relegation rivals Palermo and Siena.

Born in the southern Italian town of Avellino, Preziosi made his fortune, oddly enough, in toy-making. He is the president of Giochi Preziosi, a toy wholesaler, and his holding company has a stake in dozens of companies, mostly in the toy and food industry. It’s safe to say that as long as Preziosi is in charge Genoa shouldn’t have any grave financial difficulties.

Preziosi’s first foray into football was in 1994 when he held the presidency of Serie D side Saronno, who under his leadership came extremely close to obtaining promotion to Serie B. However, Preziosi eventually left the club and purchased Como Calcio in 1998. Como enjoyed much success under Preziosi’s patronage, going from Serie C/1 to the top flight in only four years.

Then in 2003, Preziosi sold his stake in Como and purchased one of Italy’s most historic clubs in Genoa, who were struggling badly in Serie B. After a slightly better season (going from 18th to 16th in the 2003-04 season), thing started to pick up, and in the 2004-05 season, Genoa flew up the table. The Grifoni were cruising in Serie B on the back of a strong roster led by Argentine Diego Milito.

On the final matchday of the season, Genoa needed a win to ensure automatic promotion to Serie A as there were a trio of clubs nipping at their heels for the cadetti. Three points looked to be almost guaranteed considering their opponent, Venezia, was already condemned to the drop. Preziosi, incredibly, did not want to leave anything to chance, and exchanges between himself and Venezia director Francesco Dal Cin show that there was an “arrangement” to let Genoa win, for a fee of course.

The damning evidence came in the form of a suitcase filled with €250,000 exchanged between the two clubs, initially claimed by both sides to be an advance on the purchase of Venezia defender Ruben Maldonado. Police wiretaps proved this was not the case, and as a result, Genoa were relegated to Serie C/1 and Preziosi resigned after being given a five year ban from football, however, he eventually retained his title as president.

Genoa finally achieved promotion to the top flight for the first time in 12 years during the 2006-07 season, thanks to Preziosi’s investment into the club and manager Gian Piero Gasperini’s high-octane offense, scorer of the second highest amount of goals in Serie B that year. Genoa under Preziosi enjoyed a bit of stability and success under the guidance of Gasperini in the top flight, however, things would start to go downhill after his dismissal in October 2010 and Preziosi’s impulses would return to the forefront of the club.

Preziosi, like his counterpart in the Sicilian capital, has a tendency to hire and fire coaches with alarming regularity. Since acquiring the club ten years ago, Preziosi has gone through fourteen managerial changes, with the only period of stability coming from Gian Piero Gasperini’s four year stint at the club, guiding them to promotion in his first season, and a Europa League spot two seasons later. Once he was sacked in October 2010 after a 3-3 draw versus Roma, the coach carousel was in full swing on the Ligurian coast.

It isn’t only coaches that Preziosi burns through, but players as well. Genoa have a fly-by-night approach to the transfer market, buying players just for the sake of it without much rhyme or reason. This season Genoa have 87 players on the books, which includes those on loan to other clubs or under co-ownership. It’s not necessarily just the carousel of coaches that has bogged down Genoa, but the constant cycle of players coming and going at the club as well, and the combination of the two has led to disastrous results.

Freelance football writer and columnist for Forza Italian Football, and contributor to In Bed With Maradona, Talking Baws, and Serie A Weekly.