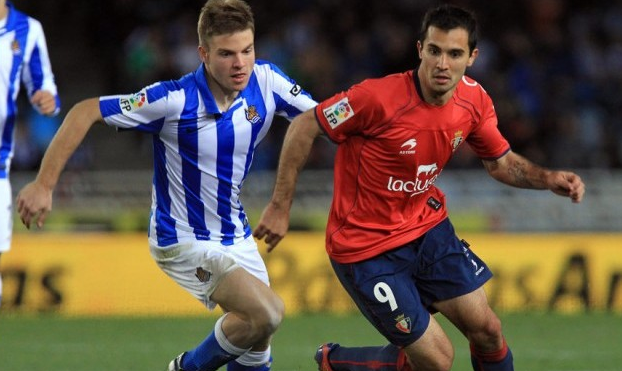 A derby match in the evening is unthinkable in most countries. Imagine Celtic v Rangers at 7pm on a Sunday evening. No wait, don’t.

Osasuna hosted Real Sociedad in desperate need of a win. The Pamplona based outfit were only three points above the drop zone going into this fixture, despite a recovery from their shocking start to the season.

Real Sociedad, in contrast, are having a dream season. They find themselves in fourth place looking to seal a Champions League spot for the first time since 2003. That year La Real narrowly missed out on the title, finishing second to Real Madrid, their best season since third place in 1998.

My experience from attending this fixture was of a real surprising nature. Expecting to feel tension and bad feelings as I arrived at Estadio El Sadar, I was surprised to see a mixture of red and blue around the stadium. There were many families with children in Osasuna shirts and parents in Real Sociedad colours, whilst others enjoyed each other’s company, laughing and joking in the stadium bars.

The same ill feeling that these sides have with Athletic Bilbao is no way apparent with each other. At one point I noticed a Real Sociedad fan holding up a blue and white scarf with the words “Anti-Athletic” on it, their common enemy as such. This is due to the view that Athletic tend to poach their best players. Javi Martínez and Fernando Llorente are both Pamplona born, with Athletic paying €6 million for Martínez when he was just 17. The sheer might of Bilbao is enough for them to muscle their way in to take the young and upcoming Basque players.

These sides aren’t without their Basque influences. Both sides, like Bilbao, had a strict Basque-only player rule at one point. However, financial situations dictated the need for change. Real Sociedad’s first non-Basque player was none other than “Irish” man John Aldridge, who top scored for the San Sebastián side in his only two seasons from 1989 to 1991. They have also had “outside” influences such as Chris Coleman managing the club during the 2007/2008 season and John Toshack enjoying three separate spells at the north coastal club.

Former Real Sociedad players current plying their trade at the top level include Xabi Alonso and Mikel Arteta. Alonso was a product of the club’s youth system whereas Arteta signed for his hometown club after a mixed spell at Rangers.

Other notable names include current Chelsea manager Rafa Benitez, who managed Osasuna during the 1996/1997 season, but after only one win in nine was sacked. Current Arsenal left back, Nancho Monreal and Chelsea right back, Cesar Azpilicueta, are products of Osasuna’s Tajonar-based youth system.

The game itself wasn’t one for the neutrals finishing goalless. Real Sociedad tended to be classier and sleeker on the ball; however, they couldn’t get through Osasuna’s robust defence. Aside from a De Las Cuevas free kick, the home side rarely troubled keeper Bravo.

For Real Sociedad, their skipper Xabi Prieto, drew a number of fine saves out of Osasuna keeper Andres Fernandez during the game. Fernandez has been outstanding this season and has been touted in the Spanish media as the possible replacement for Valdes at Barcelona.

To emphasize the friendliness of this derby, the Osasuna Ultras, Idnar Gorri, Basque for “Red Force”, were strangely muted during the match. (Also important to note they display an Irish flag in their end.) In comparison to the last game I attended, at home to Real Zaragoza, which saw the away fans hang a Spanish flag in the stadium. I can safely say it’s the most amount of birds flipped I’ve seen in the one place. Cue booing and whistling.

Estadio El Sadar is a difficult place for sides to go, especially for the “big two.” Only for two goals in the last ten minutes earlier in the season from Messi, did Barcelona claim all three points. Also in January, Real Madrid could only draw 0-0 in a game that saw Kaka’ sent off and Osasuna miss a number of guilt-edge chances. It was only last season that Osasuna claimed a 3-2 win over Barcelona, which all but confirmed the title for Madrid. In strange contrast, they defeated Real Madrid at home to help Barcelona to the title in the 2010/2011 season.

So where does this leave the two sides?

Real Sociedad continue in their quest for Champions League football. They sit in fourth place, two points above Valencia who they host in their next game. The threat of Malaga is gone as they are banned from taking part in the Champions League next season. They will look to former Arsenal striker, Carlo Vela, and captain Xabi Prieto to fire them to a fourth place finish. In truth Txuri-urdin (Basque for white-blue) have had a fantastic season already. Their comeback against Barcelona inflicted the first defeat on the Champions-elect this season and they are currently on a 14 match unbeaten run. Unthinkable at the start of the season considering they finished in twelfth place last year.

Osasuna on the other hand are looking over their shoulder as the danger of relegation has yet to be cleared. The Pamplona club has a strange inconsistency from season to season. Last year they were in contention for Champions League football until the final few games, eventually finishing seventh. The season before they were in relegation trouble in the last game of the season, however coming from 2-1 down at home to Sevilla to win the last five minutes saw them safe. The close nature of La Liga that season somehow saw them finish in the ninth place, four points above the relegation zone. Osasuna have been previously compared to Bolton with their style of play, however, Wigan may be more apt as they too seem to be the barnacle of league, always sticking around.

With Osasuna being the Basque word for “health”, it seems ironic they find themselves in such a perilous position. A couple of wins from their last few games should be enough to consolidate their 14th consecutive season in Spain’s top flight.

One thought on “The other Basque derby”