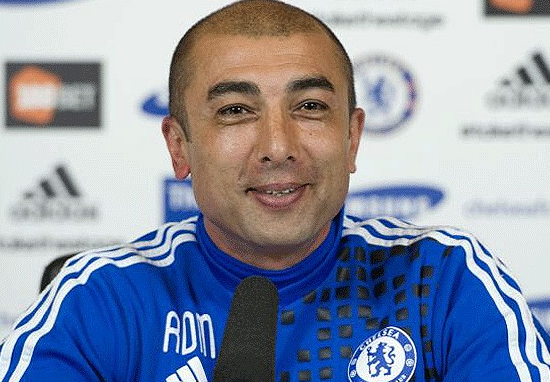 The joyous yet understated fist pump by Roberto Di Matteo symbolises the dramatic yet discreet changes that have happened at Chelsea since the west Londoners lifted the European Cup in May. Didier Drogba, the player whose last kick for Chelsea brought the European Cup to London for the first time, exited with great memories but no fuss.

The Brazilian Oscar and the Belgian magician Eden Hazard were brought in to dovetail with Juan Mata and to get the best out of Fernando Torres. These signings had the pundits talking about Chelsea attempts to replicate Barcelona’s style and flair. The briefings in the press seemed to come from the club and from the owners desire to see beautiful and winning football a la Barcelona.

To be fair to Roberto Di Matteo the Chelsea manager never hyped up any potential change of style – merely stating that “he had signed good players”.   What Di Matteo has done is not try to replicate Barcelona but to create his own style based on counter attacking, slick passing and mesmerizing forward movement.  Di Matteo must take huge credit for seeking to develop his style and not merely try to copy the Barca way. What Di Mateo has introduced is a greater fluidity and intensity to Chelsea, the absence of Drogba means Chelsea must build more slowly and his use of Hazard, Mata and Oscar has liberated Chelsea up front. Indeed, Chelsea press the ball with an intensity and intelligence that is reminiscent of Rafael Benitez’s Valencia team.

Di Matteo himself has been a revelation. His quiet understated style is most welcome in a game where egocentric managers tend to be the norm.  He has throughout the whole hullabaloo over John Terry kept the Chelsea ship on course while at the same time conducting himself with great dignity.

The Italian’s statement that he has signed good players is proving to be absolutely correct. The marquee signing of the summer, Hazard showed immediately in the community shield and to a greater extent against Wigan on the opening day, that his pace, movement and vision was of the highest quality. His trickery and pace has won him many penalties and his through ball to Juan Mata against Tottenham is already a leading contender for pass of the season.

It is important to acknowledge that the Belgian should not claim all of the credit for this more fluid Chelsea. Oscar arrived for a reasonable amount of money but his signing slipped under the radar to a certain extent. What is most impressive about the boy from Americana is his drive and work rate. On first viewing it is clear that Oscar has the flair and vision to influence the game in the final third of the pitch but his ability to react to the natural transition from defence to attack during a game is most impressive. The Brazilian is more than willing to the dirty side of the game which was  evident during the 2-1 victory away at Arsenal where he constantly hassled and harried the Arsenal midfield when Chelsea were out of possession.

The addition of Oscar and Hazard has coincided with a revival in Fernando Torres. There is an argument whether we will ever see the Torres of 2007, 2008 and 2009 but was that Torres the exception to the rule. During those three years the Spaniard was the closest to the complete centre forward since the great Marco Van Basten. The Torres prior to and since then has been injury prone, erratically effective and occasionally despondent.  This season however Torres has looked sharp and engaged with his team mates. His link play has improved but more importantly he has the incisive runs and goals of old. Chelsea are light of numbers up front so a fit and firing Fernando Torres is of vital importance for this season at least.

The one glaring weakness this Chelsea team have is John Obi Mikel.  It is not that the Nigerian is a bad player but he is wholly unsuited to the deep lying role in a side that thrives on quick passing. The Nigerian is an obvious weak link as illustrated by the way he was targeted and exploited constantly by Juventus last month.

The problem with Mikel is his slowness of mind when it comes to moving the football. He has the unfortunate habit of dwelling on the ball which makes him a prime target for those sides that operate a high press. It is weakness that has been in Mikel’s game for a long time indeed, Liverpool’s opening goal against the European Champions at Stamford Bridge last November came from pressing Mikel high, forcing him to give the ball away which lead quickly  to a goal for Maxi. The addition of top quality sitter in the mould of a Sergi Busquets is a must if Chelsea aim to dominate the European game.

The Mikel position is the only cloud on an otherwise bright sky for Chelsea. The form of Ramires has transformed the Chelsea midfield providing them with a drive and purpose that they so badly missed in recent seasons. The underrated Brazilian goes about his business in an unfussy manner but many at Chelsea speak of him as “the key man”.

The remarkable thing about Ramires is his ability to bomb forward but also sit and control the game as well as putting in some crunching tackles. Ramires’ importance lies in the fact that his broad base skill set allows the trio of Hazard, Mata and Oscar the freedom to play close together, to swap and interchange making it extremely difficult for defenders to pick them up.

This was evident on Saturday against Tottenham where William Gallas in particular struggled with the pace and movement of Chelsea’s front four. The wins against Tottenham and Arsenal away from home have nullified to a certain extent the argument that Chelsea’s free flowing, free form front four would struggle against the better sides away from home.

The new swashbuckling Chelsea face Manchester United on Sunday while Liverpool and Manchester City visit shortly after. We will be able to judge the success and feasibility of the new ‘off the cuff’ Chelsea better after these games but at the moment things are looking very good for Di Matteo’s troops.

3 thoughts on “The New Chelsea”