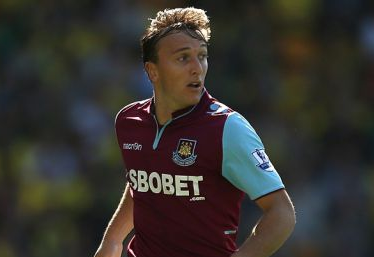 Sometimes I watch football and wonder with some players, how on earth haven’t they got a England cap? Or why are their talents so underrated? Here’s a list of players that deserve recognition for the graft they put on the pitch.

Mr Everton, Leon Osman has been a key of David Moyes’midfield for many years now and he’s always made his mark on the big games. With a great ability to spray the ball around and a decent strike, Osman has always staked a claim for an England cap. The fact he hasn’t got a cap is fitting acutally, it really does reflect the side he plays for in a underrated Everton team.

Once a key member of the England Under 21’s, Mark Noble has never earned an England cap. Depsite his constant reliable performances for West Ham, he’s often overlooked, with England managers constantly trying to get the Lampard, Gerrard duo to work. However, still only 25, Noble still has plenty of time to make his first England apperance.

A key player for Bolton, Newcastle and West Ham over the last ten years, it’s a mere mockery of football that Nolan has never earned an England cap. A goalscoring midfielder, who’s inspired every team he’s played for, Nolan is reknown for his grit and determination that should have earned him an England cap.

When naming great Premier League goalkeepers, the names that usually pop up are Cech, Hart, Reina and now possibly De Gea. But somebody is usually forgotten for his heroics is American goalkeeper, Tim Howard. Tim has played in the Premier League since 2003 for Manchester United and Everton, it didn’t really work out for him at Manchester United, often forgotten, as he struggled to find confidence at club that requires a lot from their goalkeepers. A Loan move to Everton turned him into a reliable shotstopper, suggesting Moyes had a positive affect on him and since signing permantley in 2007, he’s put many good performances, winning Everton some key points as they regularly notch up top ten finishes.

Defoe does excatly what it says on the tin and that’s score. One of the most potent finishers in the Premier League, Defoe’s services for both England and Tottenham often go unappreciated. For England he’s only needed when Rooney’s out, which is quiet insulting considering his form for England has been better than Rooney’s for many years now. Recently he’s shown what he’s all about, scoring some impressive goals against Italy and Chelsea.

The backbone of the WBA team, Mulumbu arrived on the scene in 2009, signed by then Baggies manager, Roberto Di Matteo as West Brom prepared for a season in the Championship. Ever since his breakthrough season in the Championship, Mulumbu has been a regular on every West Brom’s managers team sheet with his ability to dictate the pace of the game, put a tough tackle in and pass, Mulumbu is most certainly an unsung hero.

3 thoughts on “The most underrated Premier League players”