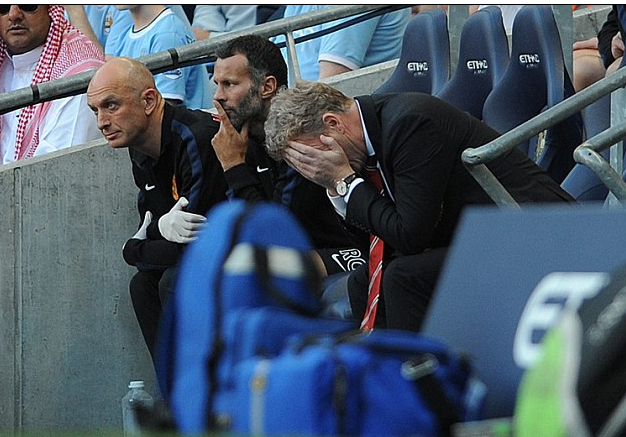 Week 1: Arsenal in crisis after first day defeat to Villa

Week 3: Manchester United unrest as they crash to a beating at Anfield

Week 6: Manchester United back in crisis with West Brom defeat

It seems like the collective narrative loves to put the pressure on sides expected to challenge at the top of the table.

David Moyes’ latest unwanted headlines have come at the hands of Morgan Amalfitano and Saido Berahino as the Baggies came away from Manchester with an unexpected three points.

The team best known for handing a host of Premier League managers their P45s couldn’t expect to claim another scalp at Old Trafford, but they’ve certainly got the vultures circling.

If you’d tuned in to 6-0-6 either evening this weekend you could be forgiven for thinking you were listening to the regional winners of a knee-jerking competition attempting to outdo each other in the grand final. One caller insisted that the only way forward was to pay Moyes out for the remainder of his six-year contract and install Roberto Di Matteo at the helm.

The majority of Manchester United fans ringing in ranged only in their opinion of how clueless, ill prepared and inexperienced Fergie’s successor was. Whilst most stopped short of calling for him to be sacked, only a handful suggested that this criticism was premature and that he needed to be given time to make amends for a shaky start.

It must be said that many right-thinking supporters wouldn’t want to associate themselves with these opinions and many wouldn’t even dream of contacting a radio phone-in, but those who shout loudest are often heard most.

There have been mistakes, certainly. But Moyes was right to say that the fixture computer had been particularly unkind in handing his side trips to Anfield and the Etihad in the first five fixtures to go along with welcoming Chelsea to Old Trafford.

Plenty of people must be lining up to offer their two cents to Moyes at the moment, but one place he might not have looked to for inspiration would be the other end of the M62.

When Brendan Rodgers started his tenure at Liverpool last season, he was in a very similar position. A relatively green manager replacing a club legend, with large sections of the home support unconvinced and facing a devilish first five league games with a limited squad.

The Reds’ first five that campaign included matches against Manchester City, Manchester United and Arsenal. After that run Liverpool were in 18th, with no wins and 2 points.

Following this poor beginning was a recovery of sorts and, whilst the final league position of 7th didn’t represent the pinnacle of expectation, there were enough signs that the club was moving in the right direction for the majority of fans to get behind the ideology.

So what can Moyes learn from how Rodgers handled the difficult start to his managerial tenure? There are some points that he could certainly look at to keep fans’ criticism at bay.

There is a similarity between the squads that both managers were left with when they took up the job – a fairly sound first XI not backed up by great strength in depth.

Rather than rotating his best options with existing squad members that don’t appear to be capable of advancing into regular first-teamers, Rodgers took the approach of throwing young players in at the deep end. Andre Wisdom, Raheem Sterling and Suso were all handed regular starts in the league, with Jerome Sinclair given a first team debut just six days after his 16th birthday.

This method succeeded for two reasons: their performances were generally pretty good and when they weren’t, fans were much more sympathetic to an off day. Sterling in particular caught the eye and was handed a new deal to tie him to the club for the long term.

Moyes has received criticism from some quarters for his reluctance to play some of the younger members of the Manchester United squad, in particular Wilfried Zaha. The fact that he is introducing Adnan Januzaj in regularly has definitely softened the stance of some fans, but he could go further. Players like Michael Keane could be encouraged to make the step up when United are slightly short at the back, whilst twin brother Will was known to be highly thought of by Sir Alex Ferguson.

Perhaps it was a touch rash to loan out Jesse Lingard and Nick Powell, but there are enough young players still at the club to excite the fans.

2. Pledge to spend in January

The first transfer window for both Rodgers and Moyes approached the farcical. Whilst the Northern Irishman insisted he would be ‘mad’ to let Andy Carroll go without having a replacement lined up, that is precisely what he did as Clint Dempsey slipped through the net and signed for Spurs. Manchester United targeted a whole host of big-name central midfielders and left backs before failing to land any of them and overspending in a rushed-through, last-ditch deal.

It can’t have been easy for either manager. Both had to abandon lovingly crafted transfer plans for their existing clubs and draw up an entire new list for a team with a bigger budget and higher profile. Both ended up spending the bulk of their cash on players they had already worked with, as Borini and Allen joined Liverpool whilst Fellaini arrived at Old Trafford.

Whilst both clubs felt the need to issue a statement justifying their transfer issues, Rodgers and Liverpool admitted they had blundered to an extent, promising to set things right when they could, whilst Moyes and United insisted they had achieved what they set out to do.

It might have been less painful in the long-term to admit that mistakes were made and pledge to correct them as soon as possible. What the Old Trafford hierarchy can do is confess this privately and make plans for January immediately.

The winter window was a successful one at Anfield, as Phillipe Coutinho and Daniel Sturridge transferred in for relatively low fees and immediately proved their worth. It would represent a major plus for Moyes if he could identify targets now and land them as soon as the window re-opens.

This is a point that can not only be learned from Brendan Rodgers’ first season at Liverpool, but also Jose Mourinho’s opening campaign in his first stint at Chelsea.

Whilst Rodgers played largely second-string sides in the domestic cups and was knocked out early, Mourinho focused on winning a trophy as soon as possible when he arrived, picking up the League Cup at the first time of asking. That winning mentality was ingrained in the squad and they followed it up with the Premier League title.

Moyes played a reserve side and managed to scrape past Liverpool in the Capital One Cup third round, but he might want to consider playing a stronger team in the next stage. Silverware is a remarkably powerful ally when attempting to win over fans, and if he can pick up a trophy in his first season it will go a long way to allaying supporters’ concerns.

There is no guaranteed formula to succeed in one of the hardest jobs in football. There’s certainly no way that he can seamlessly replace Ferguson without bumps in the road.

What Moyes can do is mitigate the concerns of the fans and buy himself, and his regime, enough time to build a lasting, long-term solution that will stand the club in good stead for years to come.