The clock had just ticked a second or two past 10 p.m., and I was on my way back from the pool as I would be on most Sunday nights.

In a routine move I reached into my pocket to check my phone for any missed calls or texts. I pulled it out, and as I dragged down the notification bar, I felt a most ecstatic quiver surge all over my body. My incredulous eyes could hardly believe what sat before them.

It is not always simple to drape moments like that with worthy words, but I am going to willfully defy the odds and try to do just that in the sentences, or perhaps paragraphs to come.

I had received a text message inviting me to meet with none other than Adel Ferdosipour. To the non-Iranian reader, the name may come as any other, to us, it is far from so.

Now, mine was the opportunity to see from close quarters whom I had idolised for the better part of my life, and for that I was ever so rapturous.

Walking the streets, I could not but utter words of profuse appreciation to God, for I thought myself immensely blessed. That night I still recall in a truly majestic light. 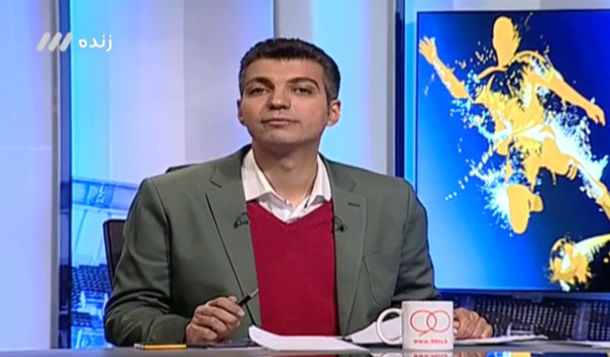 Adel is arguably—though few, if any at all, would argue against that—the most popular sportscaster, commentator, and TV host in the history of mass media in Iran.

Such is his standing amongst Iranian people that in 2009 a Newsweek.com article ranked him 19th on a list of the most powerful people in the country.

He is a graduate of Sharif University of Technology which is Iran’s top-ranked university for engineering and technology.

He also holds a lecturer position at the same university, and has only recently been awarded a PhD in media management from the University of Tehran.

Adel is often acclaimed as an astute translator as well, having rendered a handful of works into Persian—the last being ‘The Art of Thinking Clearly’ by Rolf Dobelli.

Adel Ferdosipour first burst onto the media scene as a young commentator with a peculiar voice that had previously denied him entrance into the television sector on a number of occasions.

At the time, the commentary business in Iran was heavily dominated by an established minority not completely averse to monotony and rigid stereotypes, but they were soon to capitulate to the genius of a gifted maverick who would bulldoze the industry’s entire edifice only to erect it once again on his own terms.

At the outset of what proved to be a much-coveted career, he was restricted to late-night commentaries of recorded sports events, but it didn’t take long for him to win the hearts of millions of viewers with his hitherto unheard-of prowess, novel thinking, and barefaced honesty all through one medium: that peculiar voice of his.

A voice that even to this day, and after all the fame and glory that has come his way, never ceases to speak the truth.

Adel’s was a style of commentary that contravened all established cliché and orthodox jargon.

He was the first to splash unfamiliar colors on the canvas in an atmosphere completely dominated by black and white.

This young bashful man introduced a whole new footballing register with his fearless use of fresh terms.

He was not in the least afraid to be himself, and that did not go unappreciated as his reputation began to burgeon.

Adel would notice things that no one else would. His meticulous eye for detail left many open-mouthed and amazed, and soon word circulated of this prodigy who would disclose fine details on a makeshift left-back in England’s third tier.

What he was doing, he was doing at a time when the Internet was nowhere near the force it is today, and in the context of the chaotic state of affairs in a post-war, sanction-stricken Iran.

He was something different, a complete breath of fresh air, and one could readily sense the extraordinary in him. Adel was nothing like what had come before him.

He would swiftly realise what trajectory the ball would take after it had taken a deflection, and he was the first to suspect an offside call before the referee had even arrived at it himself.

He viewed everything from an angle altogether dissimilar to his predecessors’, and he was infallibly right at all times.

It was as though he foresaw every possible scenario before one eventually transpired on the green rectangle.

This fascinating spectacle of virtuosity, intelligence, and genuineness gave him a folk-hero status he has deservedly retained to this day.

One of his first appearances before the camera was on a TV game show back in 1993 when he shocked the famous host with his impressive sporting knowledge, reciting Pele’s full name to a bemused audience.

At the moment he was no more than another participant, and little did anyone know that in six years’ time he would set about a show of his own, a show that would develop into Iran’s most-viewed television program.

Adel has a kind of childlike unrestrained attachment to football. He could sit by you and initiate the most amiable of conversations about last night’s big sporting event, and he would listen to you as if you were a life-long boon companion.

It is this air of modesty, and his innocent bearing that truly sets him apart from all else.

On a human level this guy embodies virtues seldom seen in our present-day world.

His unwavering integrity in the face of open and disguised animosity has elevated him to highs few of his contemporaries can claim to have touched.

My first personal taste of his striking humility came when I texted him for the first time.

I had made every endeavor to secure his contact information, and when the possibility ultimately presented itself I was filled with quaking anxiety, but once I did muster the courage to finally send him a text message, it was his openness and kind words that appeased my inner turmoil at once.

Just try to envisage the number of messages this man receives on a daily basis – probably a figure in the hundreds, to say the very least – and then add his magnanimous willingness to take time out of his unbelievably punishing schedule to respond to a text from an unknown football aficionado.

In popularity terms, Adel is no less a figure than a Lionel Messi, or a Barack Obama within Iranian borders, yet he carries himself as though he were no different from any other.

“You want to know how much of a football fanatic I am? I have dreams about football every night!” claimed Ferdosipour in a recent TV appearance.

A self-confessed Liverpool fan, Adel went on to say that he often finds himself awoken from dreams that he is a major board member at the Merseyside club.

In one particularly amusing instance Adel revealed that Sammy Hyypia, the Red’s former defender, had paid him a surprise visit in the realm of fantasy to personally thank him on account of his perfect precision in pronouncing the Finn’s name.

One of Adel’s associates lifts the lid on another case of such ingenuous passion for the game: ‘You could go to the cinema with him, and halfway through the film you would catch him watching football on his smart phone.’

Doubtless, such revelations are only further proof of the guileless sentiments he feels towards football.

On Saturday, August 14, 1999, Adel’s very own show, titled ‘Navad,’ was aired on Iran’s third national TV channel for the first time. (The term ‘Navad’ denotes the number ‘ninety’ in the Persian language, alluding to the duration of a football match.)

A curious coincidence would be Gary Lineker’s appointment as the host of Match of the Day in the same year.

The pair certainly share a thing or two under the spotlight, not least a delightful sense of humor, and in Adel’s case, Roberto Carlos and Michel Salgado can give strong evidence from their experience on Navad four months ago.

Navad endured a rather humble start, but soon began to pique interest in unprecedented fashion.

Primarily, the show’s aim was to cover Iranian football, and the Iranian Pro League in particular. However, some seventeen years later it has expanded in scope, and dilated into a programming behemoth in the Islamic Republic, attracting an average of well over ten million viewers per episode.

Adel’s fierce questioning of non-transparency of any sort, and his unmitigated harshness at the faintest whiff of corruption has earned him the faith of millions.

He has no qualms about challenging a stern politician whose words are at odds with his unique footballing ethos, nor does he seem to stand in awe of communicating what he believes to be public opinion on a given matter.

Every Monday, at around 10:30 p.m., millions of Iranians switch on their TVs to behold their hero as he indefatigably pleads their cause, a pleading that has reached beyond the fringes of football.

For Adel, the show is about far more than just football. His subtle edifying remarks, now and then, very much attest to that. He is in love with his country, his people, and they love him, too.

For them, he is the unerring exemplar who has barely ever set a foot wrong in his entire existence.

Thus, every word he utters carries a special resonance that lands deep in the depths of their psyches, hence the immensity of his role within the Iranian community.

From his first moment on live television up until now, he has continued to show a deep appreciation of the responsibility cast upon his shoulders.

Adel has poured his whole soul into the show, and plans it in fastidious detail week in, week out.

He is a worthy man in every sense of the word, one who has never even remotely entertained the idea of misusing his unrivalled social standing.

Five months ago, endowed with the enviable chance of meeting my dream mentor, I took the anxious trip to the capital.

My recollections of the occasion remain vivid and unscathed. His friendly demeanor, and congenial offer of a handshake along with the warm, serene ambience permeating the room all made for a memorable morning.

And it was no more than I had expected.

He was just as lovely a man off screen as he is on it, the same man I had venerated all through my tender years.

He was the same ardent reformer admired by a whole nation, a messiah who breathed new life into the concept of sport.

Indeed, controversy has scarcely ever failed to beset our football in the post-revolution era with plenteous cases of fraud, bribery, match fixing, embezzlement, and kakistocracy almost perpetually arresting the progress of the sport, and it was amidst these opaque waters that rose a savior whose zealous quest for a salubrious climate has culminated in more lucidity than ever before.

Along the way, Adel has surely had his fair share of antagonism as does any favored personage, but I dare venture to say that football in Iran would be nowhere near where it stands today had it not been for his blessing presence.

He is the jewel in the commentary box, the outstanding innovator, the perennial people favorite; he is the undisputed maestro, Adel Ferdosipour.