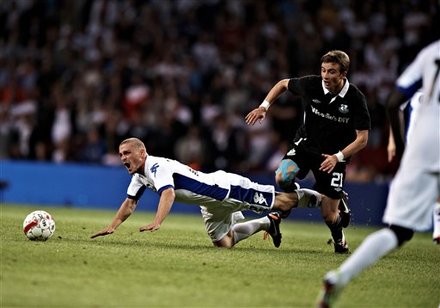 FC Copenhagen will travel to Tallaght next Tuesday for the second leg of their Champions League tie against Shamrock Rovers with a slender 1-0 lead, following the Hoops’ valiant display against the Danish champions in Parken Stadium on Wednesday night.

Rovers, who booked this tie with Copenhagen by beating Estonian side Flora Tallinn by a 1-0 aggregate scoreline, should take great pride in keeping their chances of progressing alive. European champions Barcelona could only manage to earn a 1-1 draw away to Copenhagen in last year’s Champions League group stages. The Danes are no pushovers; their squad is littered with international footballers. Yet none of this seemed to phase Michael O’Neill’s men, who could perhaps count themselves unfortunate not to come away with a draw.

Rovers suffered a nightmare start as they conceded after just four minutes, when defender Solvi Ottesen found the back of the net with a powerful header. However, the Airtricity League champions proved their character and didn’t swell on the early setback.

While they never looked quite as potent in attack as Copenhagen, the Dubliners did threaten and could’ve easily found themselves on the score sheet. Billy Dennehy, who was perhaps Rovers’ most dangerous player on the night, went closest for the Hoops in the opening 45 minutes when he toe-poked an effort towards goal from point-blank range only for the ‘keeper to save. In the second half, Gary McCabe came on to add extra impetus to Rovers forward forays, and it was his hard work that won the corner from which Ken Oman headed wide by a whisker.

If Dennehy was the best Rovers player going forward then Ken Oman has to take the accolade for the best defensive display of the night. Unfortunately, Oman came off after sustaining an injury while heroically blocking a shot on goal and Michael O’Neill will be fretting over his fitness in light of Tuesday’s second leg.

Copenhagen’s failure to score a second goal resulted in some sections of the home support jeering after the full-time whistle sounded. The Danes will face an immeasurably more hostile crowd in Tallaght next Tuesday, as Rovers look to come back from a goal down to be the first Irish club to reach the Champions League Play-off round.

A cruel 93rd minute goal leaves St. Patrick’s Athletic with a mountain to climb when they play the second leg of their Europa League third qualifying round tie, against Ukranians FC Karpaty Lviv.

Pat’s had looked set to bring the tie back to Richmond Park with just a one goal deficit to overturn, until a stoppage time free kick was directed past ‘keeper Gary Rogers by substitute Andrei Voronkov.

The Saints had went 1-0 down in the 34th minute, when defender Artem Fedetskiy scored for Lviv. Rogers pulled off a couple of great saves, including a save from Voronkov in the 89th minute, and the fixture seemed destined to remain in the balance until Voronkov’s free kick delivered a late, and surely fatal, blow to Pat’s European adventure.

Sligo Rovers claimed a very impressive scoreless draw away to Ukranian opposition FC Vorskla Poltava in their Europa League match. The result means that there will be everything to play for in The Showgrounds next week.

Both teams threatened and the visitors certainly weren’t shy in their quest for that all-important away goal. Sligo had the ball in the net at one stage, only for the referee to chalk it off as he deemed the Vorskla ‘keeper was fouled in the process. Alan Kirby missed Sligo’s best opportunity, blasting over from eight yards after 49 minutes.

One thought on “The Irish in Europe: First Leg Results”