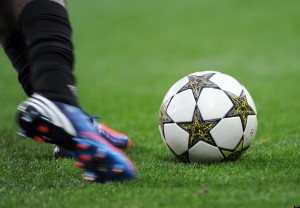 In previous installments of this series of articles on football as big business, I have looked at how increased attendances, massively increased television revenue and the formation of the Premier League have led to football becoming big business.

Yet there is one other equally decisive and important factor that has led to the current state of the game at the highest level across Europe; and that is the influence and affluence created by the UEFA Champions League.

The first Champions League, or as it was then called, the European Champion Clubs Cup (almost always abbreviated to ‘the European Cup’) was contested back in 1955-56 and was based on the somewhat simple premise that the league champions from each of Europe’s football leagues would qualify to enter the next season’s competition.

The first competition however did not feature a team from England, after under pressure from the Football League, Chelsea withdrew citing the competition was “incompatible with the league calendar”.

In the early days, winning this trophy was viewed more as a confirmation of footballing excellence than a financial reward. Teams wanted to win the European Cup as a matter of prestige, to confirm their place at the top table of European football.

From the 1950’s through to the early 1990s, the financial rewards that came from European Cup success were minimal in comparison to now. What changed that was the realisation from Europe’s top clubs that there was a real and growing market for this competition and that more games between elite European teams, even if they were not technically champions of their own league, could be a real money-spinner.

The dawn of the Champions League

The initial Champions League was merely a restructure of the format of the competition. By now, TV companies were clamouring for more top quality football and so, to fulfill this need, the biggest club competition in Europe altered how the later stages of the tournament would progress.

Instead of a straight knockout, the tournament operated as a knockout until the last eight teams remained, whereby a two-league system, four teams in each, operated, with the winners of each league progressing to the final.

This immediately created a system where there were considerably more games between top European sides and TV companies were happy to pay the price.

At this stage, the tournament still only incorporated the preceding year’s league champions into the tournament, but European football’s largest clubs, then known as the G-14, were quickly realising that the competition was starting to generate serious revenue and that there was a growing desire for more high quality European football.

UEFA moved to address that just a few years later when the 1994-95 competition was once again altered. The Group stage now expanded to four groups, with the seven top teams from Europe’s most prestigious leagues guaranteed a place in the League phase.

The change was brought about due to the expiration of the old TV contract, with newer and better off private TV companies now wanting to pay to get their hands on European football’s most prestigious competition.

By 1997-1998, UEFA had caved in, demands from Europe’s top clubs, an increased thirst for top quality games from TV companies meant that for the first time since 1955, teams other than Champions from their respective country would take part. The runner’s up of eight domestic leagues (Italy, Spain, Germany, England, Holland, Portugal, France, Turkey) plus current holders Borussia Dortmund would all participate alongside their league winners.

That small but subtle change not only rendered the term “Champions League” a misnomer, but radically altered how European football would develop over the next few years.

UEFA and TV rights – How Champions League expansion was funded

In 2006 however, the new deal was £85m, suggesting that perhaps prices had peaked but when the TV packages were renegotiated for the 2011/12 season, the price rose sharply to £131.7m per season and the latest deal, which saw BT snatch coverage for the 2015/16 through to the 2017-18 season from Sky, more than doubled in price, with BT paying £299m per year for live coverage of the competition.

Yet those figures cannot explain why the UEFA Champions League can afford such huge payments to clubs in the modern day, but what people fail to realise is that UEFA negotiate separate fees, for separate TV markets in Europe and across the globe.

This means that UEFA are free to negotiate individual TV deals with countries around the globe. Indeed UEFA have already agreed deals for the 2015-2018 seasons across 12 countries or geographic areas including Germany, Italy, the UK and the United States.

However, that number will hugely increase with close too 100 deals concluded for the rights for the 2012-2015 TV deal.

In essence, this means there are almost 100 tv companies bidding millions of pounds to show these games exclusively live, both on Pay TV and Free to Air TV around the globe every year.

This, allied with sponsorship deals with Champions League ‘partners’ such as Gazprom, Mastercard and more, swells UEFA coffers every year with billions of pounds, a large percentage of which gets distributed to clubs via the Champions League handouts.

The perfect storm – Creating the virtuous circle for Europe’s elite

With huge funding now available for the Champions League, those clubs that were regular qualifiers for the tournament soon found themselves in a somewhat fortuitous position. Their continued qualification ensured that the clubs received a big financial boost, that other clubs who did not qualify as often, or at all, did not receive.

This extra cash meant the elite clubs could now pay higher wages and along with the lure of Champions League football, meant that they were a more attractive option to players than clubs who did not qualify or only did so sporadically.

Of course, this means that with better players at the club, these elite teams were more likely to keep on qualifying for the Champions League.

Nowadays, a successful Champions League campaign, along with TV Pool right allocation, can easily earn a club £20 million even based on modest success, reach the latter stages or the final, then you can easily add a further £20 or £30 million onto that figure.

For example in 2011/12, Chelsea received £59m from their Champions League win against Bayern Munich, whereas Manchester United received £36.4m despite being eliminated from the competition at the League stage and being forced to enter the Europa League. (Source)

The situation is the same across most of Europe, where the top clubs in each league, Real Madrid and Barcelona in Spain (and to a lesser extent Atletico Madrid), Bayern Munich, Borussia Dortmund and Bayer Leverkusen in Germany, Paris St Germain in France and Juventus in Italy can all bank on a bumper pay day from the Champions League on top of their domestic TV revenue.

The effect of the Champions League cannot be understated, it has made Europe’s wealthiest clubs, wealthier and increased the gap between those that have, and those that do not.

The perfect evidence of this comes from examining the data concerning Champions League (and European Cup) semi finalists.

Stefan Syzmanski, in his “The Future of Football in Europe” study reveals that between 1967 and 1996, 43 per cent of the semi final places in the competition were taken by teams from Spain, Italy, Germany, England and France.

This meant that 57% of semi finalists during this period came from the smaller European countries such as Belgium, Scotland, Czech Republic, Portugal, Greece, Turkey, Sweden and more.

However, since 2002, only two teams out of 42 Champions League semi finalists (the last of them being PSV Eindhoven in 2005) have done so playing in a domestic league outside of Italy, Germany, France, Spain and England.

Therefore, the Champions League has had a marked effect on domestic football in one clear and distinctive way; it has made the teams who participate in it on a regular basis, far wealthier than those that do not and as a result, increases the likelihood of the same teams qualifying for the competition in successive seasons.

Is that good for the future of the game at domestic level or football as a viable, long-term big business?

Or are we simply heading towards what many experts feel is inevitable; the creation of a European Super League, featuring the Champions League top sides?

2 thoughts on “The influence and affluence of the Champions League”