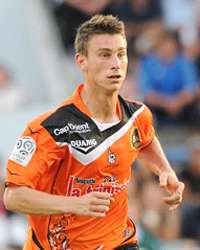 “Arsenal turn to French centre-back to alleviate defensive worries.” The headline may not exactly come as a shock to followers of the London club but, Laurent Koscielny, is a French (or Polish) centre-back with a difference.

Born in Tulle, the third largest town in the Limousin region of France, Koscielny’s career began in 2004 with Guingamp, a team that have produced such talents as Didier Drogba and Florent Malouda. Three years, and barely forty appearances, later Koscielny was forced to take stock and drop down to the French third tier. The Frenchman made sixty-seven appearances for relative minnows Tours, between 2007 and 2009, a spell which allowed the 24-year-old to focus on improving the aspects of his game that had resulted in a fall from grace at Guingamp.

Needless to say the centre-back’s form improved enough to justify being voted the league’s best player in the 2008/2009 season. By this time Koscielny had not escaped the attentions of a number of Ligue Un clubs and in May of 2009 Lorient presented Tours with an offer of €1.7 million. Tours, located on the lower reaches of the Loire, granted Lorient their wish and the defender completed his move to Brittany.

Christan Gourcuff, manager of Lorient and father of Bordeaux playmaker Yoann, proved an able mentor for the 24-year-old in a season where Koscienly showed a commanding aerial ability and a positional awareness that allowed the defender to limit himself to just three yellow cards. An impressive season culminated in reports from French daily Ouest-France that the defender was training with the Arsenal reserves ahead of an official announcement. The announcement duly followed on the 7th of July with manager Arsene Wenger gifting the Frenchman, who holds dual Polish nationality, the number six shirt. Arsenal fans will remember the number six shirt for one reason and his name is Tony Adams.

The former Arsenal captain was the foundation that Wenger’s first great team was built on. A player who matched outstanding ability with a genuine love for his club was held in the highest esteem by Gunners fans. Adams commanding displays are something that Arsenal fans will be hoping can be replicated by the former Tours defender.

Koscielny should slot straight into the Arsenal starting line-up in the space vacated by the temperamental swagger of William Gallas. It may just turn out that Koscielny replaces the former Gunner’s captain in the French national side as well. The dismal display of attitude and ability from the French players at this summer’s World Cup may give the 24-year-old his chance as Laurent Blanc attempts to add youthful exuberance to his new-look French side.

In terms of life at the Emirates, Koscielny will partner Thomas Vermaelan in the Arsenal side. The rash nature of the Belgian centre-back will be complemented by the methodical Frenchman. The former Tours man will bring an air of authority and assuredness to the Arsenal side with his excellent positioning allowing Vermaelen to continue with those marauding runs that established him as a cult hero with Gunners fans.

Arsenal fans, however, will be hoping that Wenger’s latest signing resembles former captain Tony Adams rather than the most recent Arsenal number six Phillipe Senderos. Only time will tell.