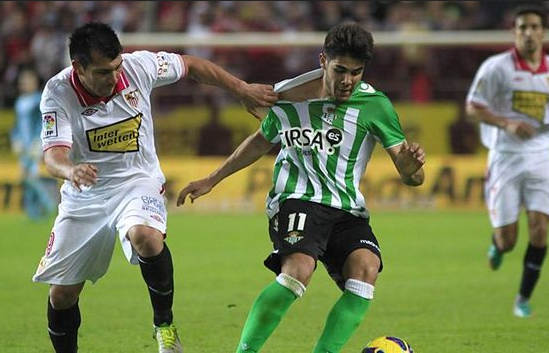 At the end of the 19th century football was introduced in Seville by the large British expatriate population in the city, implemented by owners and managers of manufacturing companies based in and around Seville, the bug started to spread and sooner rather than later there were teams all across Seville wanting to play the beautiful game.

In 1905 a lot of football teams were created in the city, everyone who was anyone now wanted to play the ‘new’ game. One new team that was born, Sevilla FC, notice the FC rather than CF was created by Spaniards and Britons as a ‘Footballing Society’. This team didn’t play many official matches at the start, in fact the team seemed like it was made for just one purpose, a team for visiting British sailors to play against once they had stopped over in Seville whilst on their travels. Sevilla played at a lot of different venues against British sailors including the Tablada Racecourse where most games were played between the two, it wasn’t until 1909 when they eventually played against a different side, fellow Andalucians, Recreativo de Huelva in their first ‘official’ match.

Two years later and another club were born, Sevilla Balompié. Balompié translates to football rather than the Spanish version of futbol and it was founded by students from the local Polytechnic Academy. In 1914, though Sevilla FC had an internal split and a group of disgruntled Sevilla FC members in 1909 and a handful of players left, meaning, another club was born – Betis Foot-ball Club. This was the football club that would eventually join forces with Sevilla Balompie. Betis FC sought royal patronage in August 1914 and by December of that year had merged with Sevilla Balompié to form, Real Betis Balompié.

The making of these two sides formed what would be known as one of the best derbies in Spanish football. Sevilla is, as many know it, Spain’s fourth largest city and most fans from across Europe when they think of ‘derby’ and ‘Spain’ jump right to El Clasico, the Basque derby or maybe even the Valencia Derby. The one derby they should all stand up and take notice of is the Seville derby.

Now these are two clubs who can’t even agree on the history of their first ‘official’ match, some fans stating it was in October 1914 and a 3-0 win to Sevilla FC, others saying that the first derby was won by Betis in January of 1915 by a single goal to nil. The third outcome is the first official match took place on 8 February 1915, with Sevilla winning 4–3. That match though was not completed, as high tensions led an aggressive crowd to invade the pitch, forcing the referee to abandon the match. To this day some fans will continue to stick up for their sides, showing what this derby is truly about, passion.

In its time as a derby, Sevilla FC are the team that have come out on top more often than any other result whether it be a draw or a win for Betis. The record stands as of the last derby (18th November) Betis win’s; 36 – Draws; 28 and Sevilla wins; 52.

Real Betis were the first team of the two to win the league back in the 1934/35 season (their only title in the top division to date), winning it by a single point over Real Madrid, Sevilla finished 5th handing bragging rights to the beticos.  Later that year though Sevilla won the Copa del Rey, the first of the clubs to win the competition, beating CE Sabadell 3-0. It didn’t take long for Sevilla to win the trophy again, winning it a few years later in the 1939 season, the bragging rights were then, in favour of all Sevilla fans. Five seasons later and Sevilla would rub more salt into the wounds of the Beticos winning the 1945–46 league title.

In that season, drama once again unfolded. Betis sold their star player Francisco Antunez to their eternal rivals. Once the transfer became known to the Beticos however, a rage erupted from them, a reaction which forced the club’s then President to rapidly back-pedal and try to block the player’s sale. The courts did rule in favour of Real Betis eventually, but this wasn’t before he had won the title with Sevilla. The player was then due to go back to Real Betis who had won the court case, but another problem occurred, Betis didn’t have the funds available and Antunez found himself once again heading north of the city and back to Sevilla FC.

Over the years there have been some massive talking points, court cases, players moving between the clubs, fraud and a whole lot more, and this has continued right up until the last decade.

It didn’t last too long and at the end of the 2000/2001 season, they both bounced straight back up, Sevilla won the championship on 80 points, 5 ahead of Betis who were also promoted.

Since that season, both clubs have had ups as well as downs over the course of the last 12 seasons.

In the 2005/06 season Real Betis had a major ‘up’ as they finished 4th in the league the season before which resulted in them being in the draw for the Champions League Third qualifying round. They found themselves pulled out the hat alongside Moncao, a team who had made the final of the Champions League the season before, they done surprisingly well beating them 3-2 over the two legs.

They then made their debut in the group stages, and were drawn against top opponents in Chelsea, Liverpool and Anderlecht. They beat Anderlecht away 1-0 and then managed to somehow beat English side Chelsea 1-0 at Estadio Manuel Ruiz de Lopera in a night to remember for all that were lucky enough to be inside the stadium (well, unless you were a Chelsea fan). They also had a scoreless draw at Anfield against Liverpool but were eventually eliminated from the tournament as they could only manage third in the group.

Another up for the club, is the talent they’ve produced over the season’s. Such players as – Cañas, Luis Fernández, Edu, Fernando, Joaquín (Now at Malaga), Rafael Sóbis, ex Barcelona and Real Madrid striker Alfonso, and who can forget ‘the real’ Denílson, plus many, many more.

They did have their downs as well, one being when they were again relegated from La Liga at the end of the 2008/09 season, they then spent two seasons in the Segunda before winning the title in 2010/2011 and with it returning to La Liga once more. Their troubles brewed a little more whilst in the Segunda, when Sevilla judge, Mercedes Alaya, was investigating links between Betis and other Ruiz de Lopera-owned businesses leading to him eventually being formally charged with fraud. A week before the trial started, another twist, he tried to sell his shares to Bitton Sport which was fronted by Luis Oliver but the judge froze all Ruiz de Lopera’s assets as she thought it was just a ‘front’ eventually Luis Oliver was on the board as he bought a nominal number of shares from a third-party and was voted onto the board of directors by the existing members meaning he could stay on and run the club. The judge still wouldn’t buy it and appointed Rafael Gordillo to administrate Lopera’s shares to make sure he wasn’t somehow still running the club and wasn’t trying to help other board members rather than the clubs itself.

Another down for Betis came in 2007 during a derby match, when Sevilla manager Juande Ramos was knocked out after having a bottle thrown at his head from a Betis fan, moments after the incident the match was abandoned.

Sevilla have had the same kind of fortune as their rivals in the years after their promotion back to La Liga, winning back to back UEFA cups in the 2005–06, 2006–07 seasons beating Middlesbrough and then Espanyol. They then won the 2006 UEFA Super Cup against Barcelona 3-0 in Monaco.

Like Betis, they’ve also had some fantastic talent playing at the Ramón Sánchez Pizjuán over the years such as, Reyes, Dani Alves and Adriano (both now at Barcelona), Júlio Baptista and Javier Saviola (Both now at Malaga), Diego Capel, Luis Fabiano and of course who can forget the defender who’s now at Real Madrid and maybe one of the best in the world, Sergio Ramos

As I said, they did also have their downs, like such incidences as the time four Sevilla fans, including a minor, assaulted a security guard during the derby on the 6th October 2002 in the Sánchez Pizjuán. The attack was punished by Sevilla being forced to play their next four home matches behind closed doors, the longest term ever given to a La Liga side.

It wasn’t the first time Sevilla had been in trouble, four of their players in 1999 had attacked Betis fans in a bar, in their testimonies they said that they had been taunted by Betis fans and thought fighting was their only choice. They also then tried to justify their actions by saying “well, they were Beticos.”

In 2007 the derby took a turn for the worst and also the best when Sevilla wing back Antonio Puerta collapsed and lost consciousness in the penalty area due to a cardiac arrest during Sevilla’s first match of the 2007–08 season at home against Getafe. He managed to get to his feet and walk to the dressing room, where he once again fell to the ground. He was taken to the hospital moments later but that night, Anotonio Puerta was announced dead – To make things worse for the players family, his girlfriend was expecting their first child at the time of his death.

At just 22 years old, fans and players from both sides attended the young Spaniards funeral to show a mark of respect. Since then things over the years have gotten a ‘little’ calmer, but at the end of the day it is still a very fierce derby.

Sevilla fan point of view (Abshir Maxamed – @Djaalooo): Ferocious; intense, and pure passion. These words are the best way to describe the hottest local derby in Spain. A city divided in two; either you are a Betico or a Sevillista. Match stewards assaulted, bottles thrown at managers, presidents insulting each other, fans attacking players – it’s all mad. But we have also seen the city united at different points, especially after the tragic death of Antonio Puerta in 2007. To the Sevillanos in the city, a derbi means the world to them. I remember seeing on Twitter – after that magical 5-1 victory – a fan describing it as it felt like winning 15 UEFA cups. That says a lot about how the locals feel about the derbi.

Real Betis fan point of view: (Ben Hardman – @hardmanbs): ‘El derbi de Sevilla’ is the first game Béticos look for when the fixture list get released. Ever since the two clubs went their separate ways around 100 years ago there has been a tension, a raw rivalry. The city is split down the middle; families are split down the middle. Each encounter is passionate, emotion packed and highly charged. Béticos embrace the derby like no other, adorned proudly in the green and white of working class Andalucía. The unique thing amongst Béticos is that they really do live by their motto ‘Viva er Betis manque pierda’ – Long live Betis even when we lose. And it’s true. This season, Betis suffered a 5-1 defeat at the hands of their great city rivals. It was embarrassing and rightly so. But six days later they were back on home turf, fans fully behind them and they triumphed 1-0 over a full-strength Real Madrid. Sevilla? They lost 4-0 to Atlético and went on a five game league win-less streak! It is this support that makes supporting Betis special – and it’s not just supporting Betis but being a Bético.