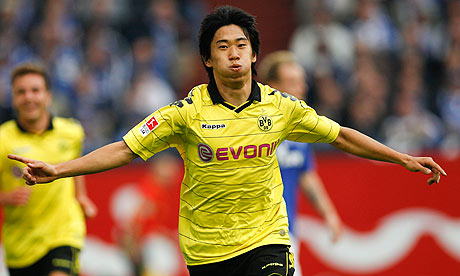 One of the special elements of the Bundesliga’s rise is rapidly-growing development of young footballers in Germany through funded football centres.

In total, there are over 120 national football centres in the country and over 60% of players in the German top-flight have been nurtured in German academies.

But this has not restricted clubs to just homegrown players and with one of the best publicised and covered leagues in world football, the scope for improving the reputation of the Bundesliga is absolutely huge.

As the English Premier League would show, Asia has proved a big part of the EPL and Bundesliga’s plans and both leagues are shown regularly across the continent.

Players such as Ji-Sung Park have enhanced the profile of the EPL across parts of Asia and now Manchester United, and a variety of other clubs, are coming out to Asia during pre-season to entertain the global audience.

In 2008, with imports such as Japanese midfielder Shinji Ono and in recent times, Shinji Kagawa, the Bundesliga has expanded its coverage and now the league is available in over 100 countries.

Kagawa joined eventual league-winners Borussia Dortmund in July 2010 from Cerezo Osaka in Japan for just £300,000 and quickly took the league by storm in Dortmund’s rampant start to the campaign. The 22-year-old’s progress was hampered by an ankle ligament injury which ruled him out for the rest of the season.

He returned to the Dortmund squad on the final game of the season to take part in BvB’s title party and will be crucial in Die Borussen’s step in to the Champions League next season.

Kagawa is joined by a number of other Japanese players, signed for small fees which has proved excellent business for the Bundesliga clubs.

Schalke’s 23-year-old defender Atsuto Uchida joined the Royal Blues last summer after an impressive spell with Kashima Antlers in the J-League. Uchida cost just €1.3m and was an integral part of the Schalke team that reached the Champions League Semi-finals and won the DFB Pokal last Saturday.

Uchida also became the first Japanese player ever to feature in the semi-finals of Europe’s premier club competition and is now a regular in the Japanese national side.

Shinji Okazaki and Makoto Hasebe are two other high-profile Japanese players in the Bundesliga. Okazaki joined Stuttgart in January from Shimizu S-Pulse and has netted twice for VfB in the second part of the campaign. The 25-year-old joined on a free transfer and has an excellent international scoring record with 21 goals in 41 caps.

Makoto Hasebe is the national team captain and plays his football with VfL Wolfsburg. The 27-year-old was Wolfsburg’s first Japanese player and became the second player from Japan to win the Bundesliga.

The Asian imports are not only coming from Japan, but countries such as China, South Korea – and even North Korea.

24-year-old Hao Junmin is another Asian star at Schalke and has made 28 appearances for the Chinese national team. Junmin, along with Uchida, played a part in Die Konigsblauen’s successful end to the season under Ralf Rangnick.

The Bundesliga has been available to Chinese fans for over a decade and the governing body recently extended their television agreement with China’s main public broadcaster CCTV so that over 150 Bundesliga games are televised for a market of over 300 million.

One young South Korean to watch in the near future is Hamburg SV’s 18-year-old striker Son Heung-Min and the youngster has made nine appearances in the Bundesliga, scoring three goals in total.

After a surprisingly decent World Cup, Jong Tae-Se from North Korea joined Bundesliga.2 side VfL Bochum and played over 20 times in their race for promotion.

The 27-year-old has scored 10 times for Bochum this season and is the only North Korean to have ever played in Bundesliga.2 – and likely, the first in the top-flight if Bochum achieve promotion next year.

The television coverage is non-existent in North Korea but in a dreamworld where the country begins to open up the world, an international figure from North Korea could be an excellent investment for a Bundesliga club.

Players from Japan, in particular, are catching the eye of German and other European clubs with the positive development of players through the J-League.

Others such as Keisuke Honda at CSKA Moscow and Yuto Nagamoto from Inter Milan have been previously linked with Bundesliga clubs and could add to the wealth of talent from Japan in the top-flight.

The largely untapped market of Asia has proved lucrative to the EPL and the influx of talent from a number of Asian countries will only serve the Bundesliga well on and off the park.

One thought on “The Growing Asian Impact on Bundesliga”