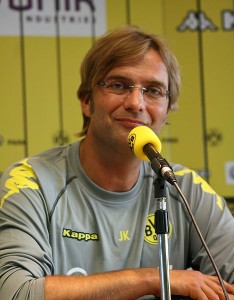 Borussia Dortmund manager Jürgen Klopp is that rarest of 21st century football managers; a man who gives an interesting (and often humorous) insight into the goings on at and of the club he manages.

The 45 year-old’s side has captured the hearts and minds of football supporters in this year’s Champions League. It is the components of the club which make it so special and of course Klopp is an integral component of the club.

Klopp himself says: “When departments of the club work really well, I don’t always feel that it’s because of me. When a great goal is scored, then you are just a fan.”

Klopp’s nature makes him one of football’s most charismatic characters. The man himself says: “I know some other coaches do it other ways and they are successful. I can’t do it any other way though. Sometimes I get carried away. There’s a camera on me for 90 minutes during a match and sometimes you make strange and dramatic moves.

“I actually injured myself once when celebrating. I tore a muscle. That’s pretty unusual!”

Klopp started his managerial career at Mainz back in 2001 before moving on to Dortmund in 2008 where he took Die Schwarzgelben from 13th in the Bundesliga to consecutive league titles in 2011 and 2012, which saw the club return to the Champions League for the first time in eight years.

Last season’s outing in club football’s premier competition was disappointing though as Dortmund were eliminated from the competition at the group stage.

Klopp has stated that the reason for his side’s failure last time out was because they were unable to punish other team’s weaknesses and the fact that his side did not press hard enough on the ball. He cites the club’s defensive pressing is now better with more men behind the ball when under threat and the emergence of a quick counter attacking player like Marco Reus as being pivotal for BVB. “You could put hurdles in front of him (Reus) and he still wouldn’t be slowed down,” – says Klopp.

Klopp says he thinks his side plays “beautiful football” with “speed, strength and energy in a legal way. Hard but fair duels. Hitting posts and the bar with a lot of chances and corners. That for me is beautiful football.

“There are a lot of people who say that the way Barcelona play is beautiful, playing back and forth across the pitch and then when Messi gets the ball it’s a goal. That for me is not beautiful though.

“In terms of beauty and attractiveness, what I like is something a bit flawed, a bit rough. That’s our game.”

Klopp believes that Bayern’s two Champions League final defeats over the last three years could play on Jupp Heynckes side’s mind – especially if Dortmund go 1-0 up and Der FCB players might think: “Oh no, not again.”

As a player, Jürgen Klopp’s footballing career never hit the heights. Having won two Bundesliga titles as a manager, his managerial career is 90 (or possibly 120) minutes away from reaching a denouement it deserves. One suspects that the majority of neutrals and football media alike will hope that exactly that happens for a man who is always good for a sound bite.

If I were working as a bank manager I might have had a credibility problem looking like I do but I don’t work as a bank manager, I work in football, … I am nice to people and I like footballers. Why shouldn’t I? We share the same hobby. But that doesn’t mean that I am their best friend.

– Klopp on his relationship with the players he manages

It’s absolutely normal that people go different ways. At 18 I wanted to see the whole world. But I am only in Mainz and Dortmund since then and … [Klopp laughs] it’s not the middle of the world. It’s OK that they want to go to different places. But they get there and, shit, it’s not the same. Look, you work for the Guardian, and sometimes you see your colleagues and think: ‘Oh no, the same old thing every day.’ Maybe you want to go to the Sun? More money, less work. More photographs, [fewer] words.

– Klopp’s response when asked about the loss of Mario Götze to Bayern Munich, while revealing his knowledge of UK tabloids.

We are a club, not a company, … but it depends on which kind of story the neutral fan wants to hear. If he respects the story of Bayern, and how much they have won since the 1970s, he can support them. But if he wants the new story, the special story, it must be Dortmund. I think, in this moment in the football world, you have to be on our side.

Shinji Kagawa is one of the best players in the world and he now plays 20 minutes at Manchester United, on the left wing.

My heart breaks. Really, I have tears in my eyes. Central midfield is Shinji’s best role.

I’m afraid we will have a Scottish situation in this league soon.