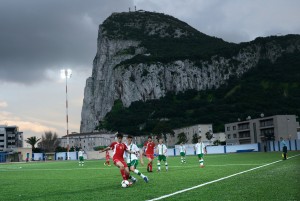 Although football in Gibraltar has been around for more than a hundred years, the experience of participating within the UEFA football community is very much new.

In a few months the Gibraltar Football Association will celebrate the first anniversary of Michel Platini finally bringing to an end their long battle to be accepted into the European body and begin a journey towards a professional national team who will compete with some of the world’s best teams in the European Championships.

Fans have been able to watch their national team play a number of times over the past decades against other unrecognised teams but their new set of opponents have started debates within the nation about the makeup of their sporting representatives, their future development, the introduction of domestic European competition and increased expectations for footballers in Gibraltar.

All of this is debated by the team at GibFootballTalk in their blog and podcast, which is made up of players from the Gibraltar Premier Division, the vice-captain of the national team and a domestic team manager.

In this interview, Julian Fortuna, Aaron Payas, Sean Mascarenhas and Ryan Gonzalez kindly gave up their time to give an insight into the ever changing footballing community in Gibraltar and their thoughts on the hot topics.

If you want to find out more, visit their blog at here where you can also find their brilliant podcast. What lessons have been learnt from Gibraltar’s first three friendlies against Slovakia, the Faroe Islands and Estonia?

In each game, a different lesson was learnt. The Slovakia game, we learnt that even the smallest nation can get a result with hard work, passion and determination. To be honest it was an unexpected result.

A defeat of around 2 to 3 goals would have been very credible and probably was what was expected prior to the game. It showed that Gibraltar had the talent mix it up at international level.

The Faroes game taught us that complacency at this level can cost you. Even though we beat the Faroes 3-0 in 2011, it could be argued that this went through the players’ minds as soon as we went 1-0 up in the game 2 weeks ago. It was a big reality check as many of the players, staff and fans were expecting to win this game.

The Estonia game showed us that the team has the character to bounce back after a disappointing performance in such a small space of time.

The back to back friendlies is something that players in Gibraltar are not used to when it comes to games for the national side, so this double header would have served them in good stead for the qualifiers come September 2014. We were unlucky to lose this game and a 2-0 score line slightly flattered Estonia. A draw would have been a deserved result.

Have these recent results made you adjust your expectations ahead of the upcoming Euro 2016 qualifying campaign?

Even the most diehard fan is realistic when it comes to Gibraltar’s chances in the qualifiers. The recent results don’t really impact on expectations. Despite Allen Bula coming out on Sky Sports News and saying he will aim for a playoff spot, realistically everybody knows this will be a steep learning curve for Gibraltar.

We have been handed one of the toughest groups possible so it will be very difficult for the players. Despite the results, everyone will be backing Gibraltar. Just having the opportunity to finally compete at this level is Gibraltar’s victory, at least in this maiden qualifying campaign.

Would you be against a tiered qualifying system for international competitions, in which the continent’s lowest ranked nations hold a separate competition to decide who enters qualifying against the bigger nations?

I think the majority of people in Gibraltar are opposed to this scenario. Perhaps those in the other smaller nations as well. The margin of score line achieved by the bigger nations against the ‘minnows’ should be irrelevant.

The only way the small nations can develop their football is by playing against the very best. If the smaller teams compete against each other, then there will less room for development.

Football is not just about the big nations and the big name players. Football is about the global footballing community, so if you segregate small nations to play amongst themselves, these nations will remain minnows forever.

Do you think UEFA should be bowing down to pressure from Spain and indulging their wish to keep them and Gibraltar apart in qualifying? Doesn’t this go against their rhetoric about keeping politics and football separate?

Absolutely not. Spain are the World and European Champions and should not be entering into these political shenanigans at a sporting level, especially against such a tiny nation.

For those who are unaware of the political climate between Spain and Gibraltar it may seem very silly that such a large and powerful country (at least in footballing terms) should bring these off the field matters onto the field.

There is no room for politics in sport, and if UEFA should entertain these wishes from nations, it should only be based on player and fan safety during a possible encounter between both nations. I don’t envision such a problem between the two.

At a local level, the harmony between Gibraltarians and Spaniards is largely very good. Gibraltarian football fans also support Spanish football, so there would be no potential harm inflicted onto the players from Gibraltar fans, so I don’t see how UEFA could accept this request from the Spanish FA.

What is the general opinion in Gibraltar about the inclusion of foreign based players in the national team squad? Should the team represent the domestic league or should the best team possible be chosen?

This is a subject where opinion is divided. There are those who believe that those players who have been playing locally and have represented the national team throughout the last few years should be given the opportunity to play now that we are UEFA members.

The biggest question from locals with regards to ‘overseas Gibraltarians’ is, “Where were these players when Gibraltar wasn’t a UEFA member?” This leads them to believe that their passion to play for Gibraltar isn’t as strong as a local Gibraltarian.

On the other hand, there are also those who believe that we must do what we can to help the local players in this transitional period from a completely amateur game, to a more semi-professional structure.

The experience players like Danny Higginbotham and Scott Wiseman bring to the camp is invaluable and will only help Gibraltar’s players as they adapt to playing at a higher level.

Another talking point locally is the level of scouting performed by the national manager on these overseas players. Some fans question their selection as “just because he is eligible and playing in the UK, the locals are overlooked.”

Players like Adam Priestley and David Artell who play for Farsley AFC and Wrexham respectively, are not well known to fans over here, so their inclusion is questioned.

However once they are on the field of play, the fan’s level of support for the overseas players is unquestionable. They are supported as if they had lived in Gibraltar all their lives.

The race for the Gibraltar Premier Division title is extremely close this season, with a number of teams aiming for the newly available European places. What impact do you think the money and experience of European competition will have on football in Gibraltar?

The title race here in Gibraltar is as close as I can remember. In the last decade or so Lincoln Red Imps usually had the title wrapped up by now, so to see at least 2 other sides challenging for the title is a breath of fresh air.

I remember discussing the season’s outlook in September before it got underway, and I mentioned that Lincoln may win it again this year, but it won’t be as easy as it was before.

Now, all clubs have the objective to challenge for a European spot, so that has increased the level of effort, commitment and ability of the other teams.

Once the 2 sides qualify for next season’s Champions league and Europa League, the money will not only benefit those clubs specifically, but the league as well. I suppose, more foreign players will be attracted to our league as it’s an easier route into European competitions, thus raising the competitiveness of the league.

One may argue however, that this could come at a detriment to the national team in a few years’ time.
Is the rush for Europe the reason why players have been given less time to spend with the national team by their clubs?

Yes that’s correct. Before, the national team met 3-4 times a week for training. Now all the clubs have agreed that due to the prize at hand of European Competition, it is also important for them to have their players as much as possible.

Is there a worry that the money from European competition will quickly create a lopsided Premier Division in future in which the wealthy teams run away with the title every season?

Well, as a mentioned earlier, Lincoln has been the dominant side of the last decade, winning the league in 11 consecutive seasons. So we are already used to a prolonged period of dominance by one team. It will be interesting to see what teams qualify for Europe next season and how the financial rewards aid them for the future.

However, seeing as the league is quite small and there are 2 European places up for grabs, external investors have already approached some clubs and injected funds into them.

Notably College Europa and Lynx, who have been proverbial 2nd Division outfits in their history, are now challenging for European Places. It will be an interesting Premier Division next season.