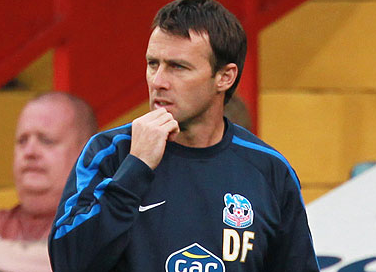 Undoubtedly the events at Old Trafford on Wednesday 30th November 2011 will go down as legend in a pocket of south London, but it would be disrespectful to confine them merely to the archives of cup giant-killings. Crystal Palace’s extra time victory over Manchester United in the Carling Cup roused the attention of the mainstream media for 24 hours, but it is not for this achievement alone that the club deserves recognition.

Wind back if you will, to January 1st of this year, when Crystal Palace fans were suffering more than most of us from New Year excesses. A 3-0 defeat to Milwall consigned the Eagles to 23rd in the Championship and left them looking for a manager following the consequent departure of George Burley. Not exactly the fresh start that many would have been hoping for in 2011.

Even the most optimistic of fans would have feared the worst, with the club having left administration only half a year earlier. But there was a hero in their midst, set to usher in a new era.

A legend as a player, Dougie Freedman was thrust into the hot seat at Selhurst Park in January 2011 tasked with turning around Palace’s fortunes. To the cynics it seemed like a cost-cutting exercise after such a tumultuous period for the club.

The Eagles had been in administration for the first eight months of 2010, narrowly escaping relegation to League One on the last day of the season. The CPFC 2010 consortium, headed by Palace fan Steve Parish, rescued the club financially but results on the pitch were not reflecting the more positive attitude off it.

Freedman certainly warranted the hero status bestowed upon him as a player, but to set him such a task for his first job in management was asking a lot.

It is safe to say that if, after that Milwall game, Palace fans were offered a mid-table berth in the Championship and a League Cup semi-final at this point in the season; they would have bitten your hand off and probably told you to lay off the bottle. But it is a testament to the sheer effort and determination that has been poured into the club by Freedman and the new owners, a group of wealthy fans led by Steve Parish, that the atmosphere around Selhurst Park has turned so positive.

Having seen my own team, Ipswich, face Crystal Palace both this season and last, pre-Freedman, the difference in the club has greatly impressed me. Ipswich came away from Selhurst Park last campaign with a comfortable 2-1 victory against a side devoid of ideas going forward and vulnerable at the back. The game was played out in front of a sparse home crowd seemingly acquiescent to their club’s demise and, as a visiting fan, it was a very comfortable away game.

Fast forward to October 2011 and the tide had turned. Irrespective of my own team’s shortcomings, Dougie Freedman’s men came to Portman Road and produced a textbook away performance. Solid and well organised throughout, they proved tough to break down and razor sharp on the break. A solid core to the team, marshalled by the likes of Paddy McCarthy and David Wright, allows the likes of Sean Scannell and Wilfired Zaha to express themselves and punish teams with their pace and attacking verve. Freedman appears to have found that often elusive balance of youth and experience that so many managers harp on about in post-match press conferences.

Most importantly, the freshness on the pitch seems to be matched by a freshness in the boardroom. There is no weird and wonderful formula that has been applied, just common sense management and passion, from people who have at heart the best interests of the club and its community.

Co-Chairmen Steve Parish and Martin Long are both lifelong Palace fans determined to get the club on an upward trend following the disastrous end to Simon Jordan’s tenure at the club.

In listening to Dougie Freedman speak, it is clear that he has the absolute backing of his owners, an invaluable asset in the modern game. There have been no egotistical calls to propel the club back to the Premier League; rather they are concerned about safeguarding the club in the right way.

The club owns its own ground once more, under the new regime, and is rebuilding the team on the strength of its youth policy. In a recent radio interview the Eagles’ manager stated ‘I’m not results oriented right now. I’m putting the club on the right path for success and that means playing youngsters’. I’m sure that this will be music to the ears of fans nationwide, desperate for their own clubs to show such strength and good sense amidst the quick fix culture in the modern game.

As a consequence, the likes of Nathaniel Clyne, Sean Scannel, Wilfried Zaha and Jonathan Williams to name but a few, have come to prominence and given the team the vitality needed to lift it out of its prior slump.

It seems ever more fruitful for clubs to give younger managers their chance. As Freedman has said, ‘It is becoming a young manager’s game’. Perhaps it is this fresh drive and enthusiasm that enables chairmen to commit to such a long-term vision, like Parish and co have at Selhurst Park. Aside from Freedman, the likes of Paul Lambert have shown the benefits of investing in youth and Malky Mackay and Eddie Howe are two more amongst many young managers sticking to their principles and working towards positive results within their budgets.

It certainly should not be expected that Palace push for promotion this season or even in the next campaign, but it’s time to embrace and applaud the way that those in charge are running their club. Others would do well to take note.