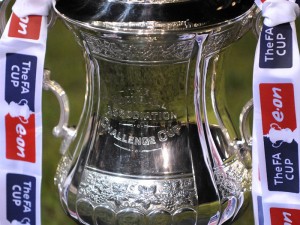 In an era when football’s class divide is more pronounced than ever, the FA Cup, that most venerable of old competitions, still retains the potential to produce quirks of sporting fate. The ‘magic of the Cup’ is something of a cliché, an accepted anomaly springing from otherwise inevitable outcomes. As clubs like Manchester City obliterate the footballing economy with unprecedented spending, such romance is little more than a halcyon throwback to a time long forgotten.

Sure, the Cup may throw together giants and minnows, as it always has, but the gulf in financial might between the elite band lounging at the pinnacle of the English game and everyone else ensures, more often than not, that their meetings remain predictable. That said, cup football still represents the sport’s truest equaliser. Plunged into the fire of a straight knockout, the group capable of holding its nerve may triumph in the face of overwhelming odds.

It proved thus on Sunday afternoon. Wigan Athletic’s incredible victory over City, in Manchester, was as surprising — and stunning — a result as anything thrown up so far this season.

Wigan are no paupers in the grand scheme of things, having benefited, more than most, from the charity of a wealthy owner. It is also worth remembering that Uwe Rösler’s team are the current holders of the trophy. Nevertheless, given their present status as the seventh best side in the Championship, victory at the Etihad was twice as improbable as the triumphant Wembley defeat of City last May.

Premier League teams suffering crises of one form or another regularly fall victim to those further down the pyramid, motivated and organised enough to heap misery on wealthy opposition. City are, of course, quite a different proposition. Very likely to take the title contest to the last day, Pellegrini’s charges play fast, attractive, aggressive football. The Chilean has at his disposal the top division’s finest squad and with one trophy already secured, he would have considered a domestic treble no small accomplishment.

His side is not invulnerable; Sunderland’s early forays last week should have encouraged Rösler to attack and on occasions this year City have failed to transform their obvious class into the required outcome. They occupy, however, a separate and gilded plane, one beyond which the ostensibly humble representatives from Wigan most definitely reside.

Afforded little hope by pundits and bookies alike, their progression to the last four — and another date at Wembley — is deeply impressive. City may have rested a number of key players but the League Cup victory suggests that successes of any description feature prominently in their manager’s remit. Rösler himself is a former Maine Road favourite, a burly centre forward once built for the demands of the Cup’s more traditional roots. The significance of the result will not be lost on him.

The tournament continues to be plagued by the Football Association’s clumsy handling and poor scheduling, an approach which undermines, in no small measure, the legitimacy and quality of its elder prize. Yet, as this most unlikely of quarter-finals has proved, there is indeed magic enough in the competition to save the FA Cup, even from itself.

One thought on “The FA Cup – still got it”