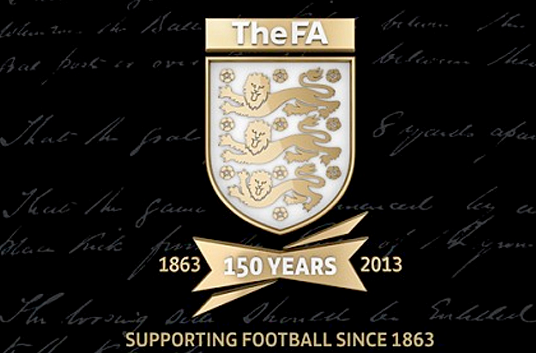 In January 2013, the Football Association launched its celebrations to commemorate the 150th anniversary of the organisation’s birth back in 1863.

When a group of representatives from public schools and local football clubs met in the Freemason’s Tavern, London to thrash out a universally acceptable set of laws for the blossoming game, the Football Association was born, and the game in England would have its much needed governing body.

Back in the mid-19th century, as participation in the game as an organised leisure activity flourished, variations in the rules were widespread as the game had developed town-by-town, village-by-village and school-by-school, and was often little more than a bruising free-for-all.

Once the game came under the umbrella of the new Football Association, innovation and creation thrived as clubs began springing up all over the country, eager to join in with the burgeoning sport. Competitions such as the F.A. Cup, inaugurated in 1871, only increased the Victorians’ thirst for the game.

With support and promotion by the F.A., football spread like wildfire across the United Kingdom and beyond as England’s game quickly became the world’s game. The creation of FIFA in 1904 meant that influence began to recede amongst the newly formed foreign associations and the organisation was then free to concentrate on domestic matters.

Between the two World Wars, relations between the English F.A. and FIFA were strained as they pulled out of the game’s governing body after refusal to play games against former wartime enemies. This led to non-participation in the first three World Cup tournaments.

After the Second World War, the F.A. decided to rejoin the party and England were now back in the fold.

Since then the Football Association has encountered many highs and lows including the maximum wage crisis of 1961, the World Cup victory of 1966 and the creation of the Premier League in 1992.

Today, the F.A. retains its status as one of the most influential bodies in world football, especially due to the hugely lucrative product it governs in the Premier League. But its history and its landmarks could all have been so different….

1863: The first standardised rules of the game are put together following a meeting of clubs in London. The first game played under these new agreed laws see Barnes and Richmond play out a 0-0 draw. An addendum to the new rules of football outlaws all draws and any game ending in a draw is to be ended by the ‘next goal wins’ method.

1871: The Football Association announce the birth of the FA Challenge Cup where its members are invited to compete in nationwide competition. Quarter final losers, Hampstead Heathens, never again enter the competition which leaves Hampstead Heath available for other ‘leisure’ activities for generations to come rather than any potential future stadium development on the site.

1872: The FA organise the first England v Scotland international which takes place in Glasgow and ends 0-0. Media of the day report “one of the jolliest, one of the most spirited and most pleasant matches that have ever been played according to Association rules”. All subsequent internationals between the countries are played in the same cordial manner with both sets of players and fans abiding by these principles at all future meetings.

1888: The Football League is founded to organise a nationally structured format for England’s top clubs. The FA declares this new competition an abomination, stating “Dear Sirs, We do not condone such a breakaway league and we will never recognise its validity. We will have our revenge,  even if it takes a hundred years. You mark our words”.

1904: FIFA is formed in Paris to govern the game globally. The FA take two years to recognise the new organisation due to the hot air balloon delivering their message of acceptance crashing somewhere in Kent.

1921: The FA agrees to play internationals and major cup finals at the new Wembley Stadium which, like its successor was completed ahead of schedule and under budget. The first Wembley cup final in 1923 saw a crowd of 250,000 come to see a man on a horse score twice for victors Bolton Wanderers.

1938: Relations between Britain, Germany and Italy reach a new low when England wins its third consecutive World Cup defeating the Italians in the final. Added to the Olympic title won in Berlin in 1936 against the Nazi German side, the FA are under pressure to ease growing tensions by giving the baddies what they want. Prime Minister Neville Chamberlain becomes involved and signs an appeasement treaty allowing the Germans and Italians to claim retrospective victories.

1950: Following England’s embarrassing defeat to the USA in the World Cup, the FA inquiry into the state of the game concludes that it’s not their fault and that the players’ lifestyle of tripe, brylcreem and roll-up cigarettes are to blame. The FA consider whether professionalism is ruining the game.

1961: A players strike over the abolishment of the maximum wage brings football to a stand-still. Union rep Jimmy Hill threatens the Football Association that the strike could roll on for years, jeopardising England’s bid to host the 1966 World Cup

1966: The world descends on England as the FA’s dream of hosting the world’s biggest football showpiece are realised. But just weeks before the tournament, players strike again over wages forcing the FA to pull the team out of the competition. West Germany win the final at Wembley thanks to Franz Beckenbauer’s last minute deflected winner over Portugal.

1992: After years of discussion, the country’s leading clubs decide to form a breakaway league under the direction of the FA. The new top flight named the Premier League, aims to generate more interest and money than ever before into English football. FA Chairman Bert Millichip announced “We told you we’d get our revenge. Up yours Football League!”.  Reports that Hampstead Heathens are invited to participate in the new Premier League are denied.

2010: The FA see their bid to host the 2018 World Cup end in failure when the tournament is awarded to oil-rich Russia. HRH Prince William, President of the Football Association, is heard shouting “Crooked bastards!”, as he storms from FIFA’s auditorium.The FA subsequently withdraw all England teams from international competition vowing never to return.

One thought on “The FA at 150: An Alternative History”